The attack on Al Hayat Primary School in Qaboun, eastern Damascus in November 2014 killed 11 children and injured many more. The horrific scenes that were shown on television and on the internet sparked widespread revulsion and condemnation.

But the Qaboun assault was just one of at least 68 attacks on schools across Syria between January and December 2014 alone, which caused an undetermined number of casualties among children and staff. All told, since the conflict began, more than 4,200 schools – around 1 in 5 – have been damaged, destroyed, or are currently sheltering internally displaced people according to data gathered by UNICEF.

Syria’s once-proud education system, its pupils and teachers, has suffered terrible punishment since the country’s nightmare descent into crisis and conflict began. International humanitarian law, which declares that schools be respected as zones of peace and safe havens for children, has counted for little. The long-term consequences for children – and their place in the Syria of the future – can only be guessed at.

“The situation is terrible but we must give Syrian children hope, above all in education,” says Maria Calivis, UNICEF Regional Director for the Middle East and North Africa. “We simply cannot allow an entire generation of children and adolescents to be lost to ignorance, exploitation, despair and radicalisation.” 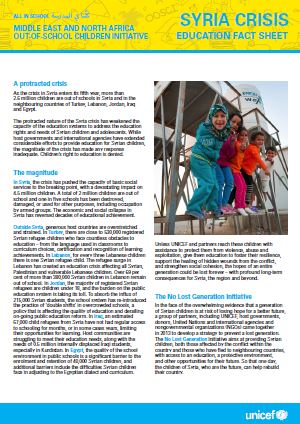 Millions of children are out of school

Inside Syria, two million children and adolescents are currently out of school. The lack of safe and protective learning spaces, coupled with a shortage of teachers, textbooks, as well as adequate water, sanitation and hygiene facilities, have all become obstacles to children’s hopes of getting an education.

Outside Syria, more than 50 per cent (600,000) of Syrian refugee children and adolescents are out of school, and this number continues to grow. The local schools that have opened their classrooms to refugee children find themselves under impossible strain.

Efforts by governments and agencies such as UNICEF to address the crisis engulfing Syria’s education system have followed twin tracks.

On one level, yearly “Back to Learning” campaigns have helped bring 2.8 million Syrian children resume their learning in all 14 governorates. The campaigns include distribution of teaching and learning materials as well as school bags with stationary. Similar campaigns have been rolled out in countries hosting refugees.

“When I go to the refugee camps and see the smiling faces of children, then I think we should not give up in the face of difficulties,” says Dina Craissati, UNICEF Regional Education Adviser for the Middle East and North Africa. “In education the challenges are enormous because education is a long term process and one does not see the effects right away – so we need to persevere with a long term vision. We need to be creative and bold.”

To address the longer-term learning needs of Syria’s children, the No Lost Generation Initiative (NLGI) — was launched in 2013. It aims to identify practical ways to provide Syrian children with access to quality education (whether formal or non-formal), while introducing accelerated learning for children who have lost years of schooling, and creating a safe environment that reduces children’s exposure to harm.

But the challenges facing this initiative are daunting. Public schools receiving Syrian children are overstretched. Non-formal education spaces cannot absorb large numbers of students. Teachers are not well equipped to work with stress, overcrowding and difference. Syrian children and adolescents are receiving multiple and dispersed forms of curricula and content that are not adapted to their capacity and needs and that come with enormous challenges in certification and accreditation.

It is this outlook which is driving the efforts now underway by UNICEF and a range of partners to provide a rights-based and sustainable solution to the education of Syrian and host-country affected marginalized children. Several approaches are being introduced to reach more children even those in the toughest situations, for example through mobile and e-learning solutions.