By Masoud Hasan and Yasmine Saker 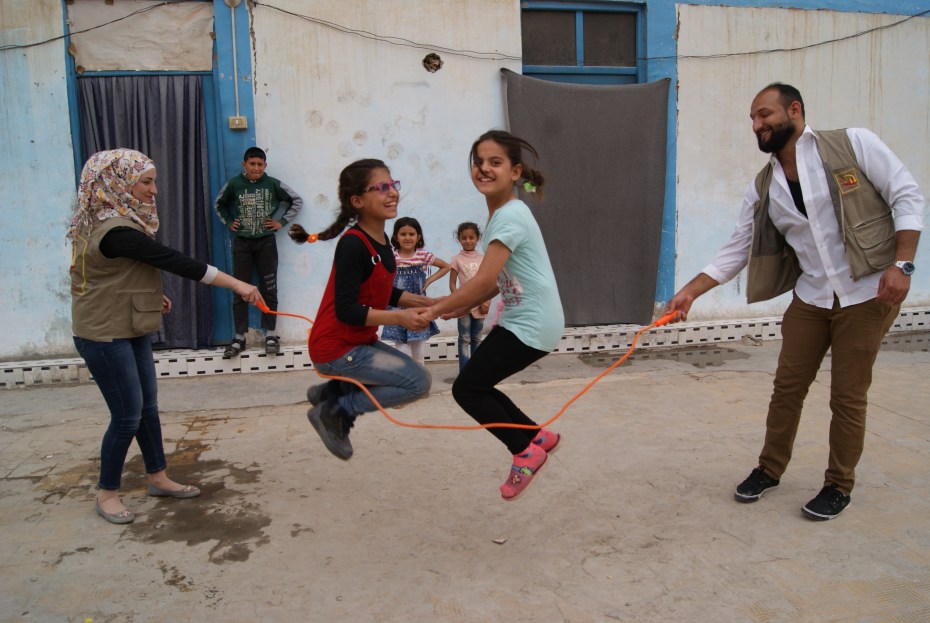 ©UNICEF/ Syria 2018/ Bashar Kheder
Alaa (in red), plays with UNICEF-supported volunteers and her sister Walaa, during psychosocial support activities at the school-turned-shelter where they live in Deir-ez-Zor, north-eastern Syria.

Little Alaa was only 9 years old when she experienced loss for the first time in her life. Her mother was killed when a shell hit their home on the outskirts of Deir-ez-Zor two years ago. A couple of months later, another shell hit near Alaa’s school, causing the loss of her right eye.

Besieged at the time, Deir-ez-Zor had no hospitals with the capacity to treat Alaa, forcing her and her father to flee in the middle of the night to seek treatment in the capital Damascus. Only days later, Alaa’s father died of a stroke, leaving her scared, alone and in pain on her hospital bed.

“I think that my mother’s death and my injury caused him so much sadness and eventually killed him,” says Alaa, now 11, with wisdom beyond her age. “I had to stay at the hospital all by myself, and all I wished for was for my mother’s soothing hug,” she adds, choking on her tears.

Following recovery, Alaa returned to Deir-ez-Zor to the care of her five sisters, only to find their home completely destroyed in fighting. The family was now living in a school-turned-shelter for families who had lost their homes.

At the shelter, Alaa started participating in recreational and educational activities supported by UNICEF as a form of psychosocial support. These activities aim to restore a sense of normality into the life of children like her and to help them cope with her situation.

“I love it when the volunteers come to play, sing and dance with us,” says Alaa with a big smile. “I like to draw red flowers and sing with my friends because they tell me I have a nice voice,” she adds.

Alaa misses her parents every day and is always quick to share her fondest memories of them. “I remember summer evenings when we used to gather in our backyard, it was my favorite time of day,” she recalls.

Alaa used to be a hard-working student, but she was forced to leave school following her injury. She still dreams of continuing her education to become a doctor and treat injured children.

With thanks to the generous contribution of Luxembourg, UNICEF is aiming to reach 20,000 children in Deir-ez-Zor and its suburbs with these activities through two child friendly spaces and two mobile teams.