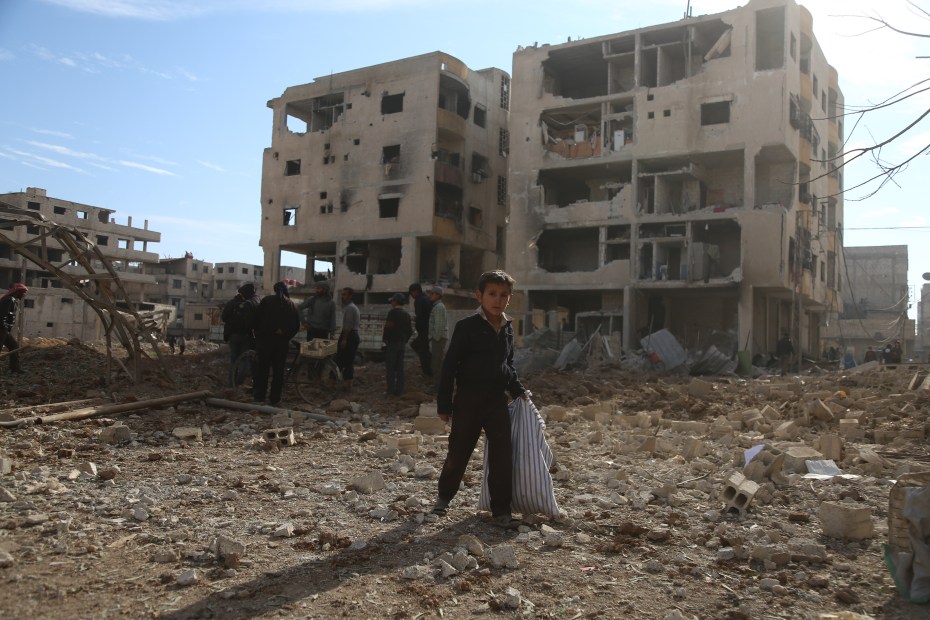 Mesraba, east Ghouta, Syria
Husam, 7, walks by the rubble of a recently attacked residential area. Husam goes out daily to gather any wood he finds in the rubble for his family to use for heating and warmth. “I haven’t been to school for a long time,” says Husam, “I have to help my father since he got injured.”
Nearly 400,000 people remain trapped in the area which has been under siege since mid-2013. Half of them are estimated to be children.
©: UNICEF/2018/Amer Almohibany

Over 30 children killed in the first two weeks of 2018

AMMAN/DAMASCUS, 14 January 2018 – “At a time when most parents are filled with the new year’s hope for their children’s future, mothers and fathers in Syria are left grieving for the children they have lost.

“It is shocking that only in the first 14 days of the year more than 30 children have been killed in escalating violence in east Ghouta, where an estimated 200,000 children have been trapped under siege since 2013. In Idlib, to the northwest of the country, heavy violence reportedly killed and injured scores of children and women and displaced an estimated 100,000 civilians in the past few weeks.

“It is shameful that nearly seven years into the conflict, a war on children continues while the world watches. Millions of children across Syria and in neighbouring countries have suffered the devastating consequences of unabating levels of violence in several parts of the country.

“UNICEF received information from inside east Ghouta that people are taking shelter underground in fear for their lives. One particular heavy attack on residential buildings was so strong it reportedly injured 80 civilians including children and women. Medical personnel struggled to pull survivors out of the rubble.

“Two medical facilities came under attack in the past days in east Ghouta, and most health centres had to close because of the violence. In some areas, mobile emergency clinics are the only way for families to receive medical treatment and aid. In Idlib, the maternity and paediatric hospital in Ma’arrat An Nu’man was attacked three times taking it out of service and killing at least one patient and two medical staff.

“Schools have been reportedly closed in and around east Ghouta at a time when children elsewhere in Syria are sitting for their mid-term exams.

“While we saw a small glimmer of hope at the end of last year with the evacuation of 17 children in urgent need of medical attention; increased violence in and around east Ghouta turned hope into despair for the remaining 120 children who continue to suffer in silence waiting for urgent medical evacuation.

“We must be able to reach children in need of humanitarian assistance, urgently and without restrictions, wherever they are in Syria. The various parties to the conflict can make that happen by immediately allowing humanitarian workers to reach them with life-saving assistance.

“UNICEF will continue providing humanitarian assistance essential to the survival and mental well-being of children all over Syria. For the most vulnerable children in besieged and hard-to-reach areas, we can and must do better.

“What does the world need to take collective action to end the war on children in Syria? When will those who are fighting realise that by killing children they are also killing Syria’s future?”