Highlights
• In Syria, many provinces including Idleb, Eastern Ghouta, and other areas in Hama and Aleppo continue
to witness heavy fighting leading to high levels of civilian casualties and damage to vital infrastructure. An
increase in anti-ISIL operations are causing further displacements, triggering concern over the safety and
protection of the affected populations. About 32 per cent of Deir-Ez-Zor population was reportedly
displaced in October 2017. This equates to an estimated 270,000 people and 85 per cent of displacement
in the country. In response to the needs of the displaced, UNICEF is providing essential WASH, health,
nutrition and winter assistance.

• In October, UNICEF participated in six inter-agency convoys to the besieged location in East-Ghouta in
Rural Damascus, and hard-to-reach areas in Rural Homs and Rural Damascus, delivering supplies for an
estimated 93,000 people, and carrying-out rapid multi-sectoral needs assessments, though restrictions
on the importation of certain medical supplies was reported.

• UNICEF reached about 1.4 million people in 211 hard-to-reach locations in Syria with life-saving
interventions and critical services in the areas of WASH, education, health and nutrition, child protection,
and youth and adolescent development, in addition to over 32,000 beneficiaries in seven besieged areas
during the reporting month. 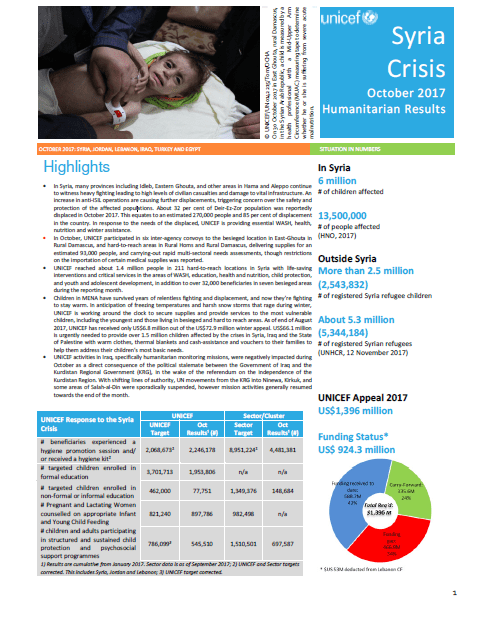