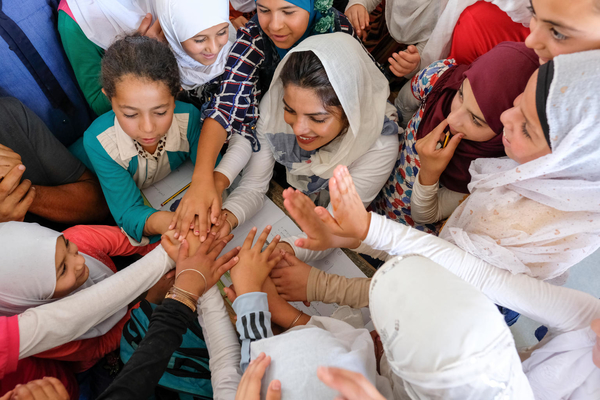 NEW YORK/AMMAN, 13 September 2017 – UNICEF Goodwill Ambassador Priyanka Chopra wrapped up a two-day visit to Jordan this week where she met with Syrian children, young people and their families whose lives have been greatly affected by the conflict.

“Reading about the situation and seeing images still never fully prepares you to experience firsthand the situation of the Syrian refugees.  These are people whose lives have been in a constant state of uncertainty for seven years now with no immediate solution in sight. And in the middle of this, for no fault of their own, is an entire generation of children who are being shaped by violence and displacement, resulting in an astonishing lack of education and opportunity. This makes this generation vulnerable on so many levels,” said Chopra.

On the first day, Chopra visited a UNICEF supported Makani (which means “My Space” in Arabic) centre in a host community in Amman and met nine year old Wardshan and her eight year old sister Ayat. Both of them had recently started school again after a gap of two years due to the family not having proper documentation. With thousands of Syrian children out of school, the Ministry of Education and UNICEF are mobilizing Makani centres across the country to help girls and boys enroll back in school, in addition to providing learning support, psychosocial care and life skills training.

Chopra later visited the two young girls’ home, and learned of the various struggles many refugee families face daily. Their father is a laborer, working odd jobs when available earning about 200 Jordanian Dinars (approx. USD280) which is equal to their monthly rent. Their oldest brother, Saleh, 10, also supplements the family income doing backbreaking work at a local supermarket for 2 JD a day (less than USD3), and does not go to school as a result.

“Without education a whole generation of children could grow up without the knowledge and skills needed to support themselves, contribute to their communities and ultimately rebuild Syria once this crisis is over,” said Chopra.  “The young people I met have all survived fleeing Syria during the conflict. They thrive to be in school and are not giving up on their dreams and aspirations – and we shouldn’t give up on them – they need us more than ever.”

Chopra visited the Za’atari refugee camp on the second day, meeting girls at a UNICEF-supported school and two Makani centres that provide psychosocial support services to both young boys involved in child labour and young girls who are survivors of child marriage. There are currently about 21,000 children enrolled in the 14 school complexes in Zaatari. Although there are seats available for every child in the camp, the enrolment is about 73 percent due to child marriages and child labour.

“I met too many young girls, all under 18 years old and married with children – some with multiple children,” said Chopra.  “What was most heartbreaking was that as children, these girls longed to be learning, but now had the responsibilities of raising children of their own. They would like to get an education themselves but face the stigma of society looking at them only as wives and mothers and judging them as adults and not the teenagers with aspirations that they actually are. However, it was very hopeful to hear that they will not let their own children miss out on an education – even those with girls.  They know an education will allow them to have a future different than the lives they are living now.” 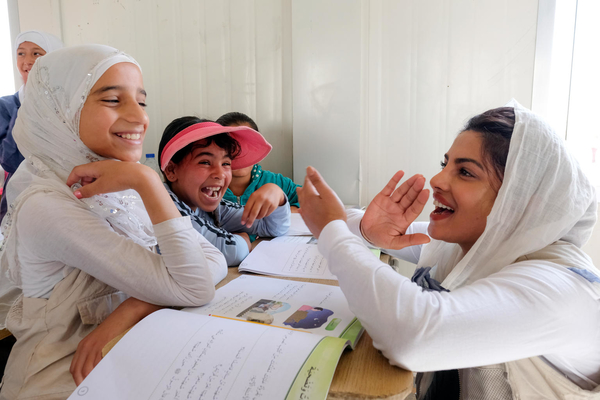 With a population of around 80,000, Za’atari is one of the largest Syrian refugee camps in the world, and is considered the 4th largest city in Jordan. Families live in caravans in a harsh desert area with freezing temperatures in the winter and extreme heat in the summer. UNICEF and partners are providing life-saving support through vaccinations, medicines, clean water, sanitation, and opportunities for children and youth to get an education and learn skills for their future.

“We very much appreciate global champions like Priyanka Chopra who can advocate for continued support for the education, protection and well-being of vulnerable girls and boys affected by the Syrian crisis,” said the UNICEF Representative, Robert Jenkins. “We are grateful for her commitment in helping us amplify the voices and dreams of millions of Syrian children and youth, who, despite the protracted crisis, remain incredibly resilient and hopeful for a better future,” he added.

The Syrian refugee crisis remains the largest humanitarian crisis since the end of World War II. Countries neighboring Syria are hosting over 5 million registered Syrian refugees, including nearly 2.5 million children. Now in its seventh year, over 8 million children inside Syria and in neighboring countries, including Jordan, need humanitarian assistance. UNICEF is working with partners to provide them with access to clean water, health and nutrition, as well as the education and protection that will help them to grow and thrive.

Jordan is today the second largest refugee-hosting country in the world when compared to the size of its population. The humanitarian crisis has placed additional pressure on Jordan’s scarce resources and is straining national institutions responsible for delivering social services.

UNICEF has been calling for an end to the cycle of violence in Syria along with further steps to keep children impacted by the conflict safe, and to provide them with psychosocial support and continued access to education for them to rebuild their lives for a better future.

UNICEF works in some of the world’s toughest places, to reach the world’s most disadvantaged children. Across 190 countries and territories, we work for every child, everywhere, to build a better world for everyone.

For more information about UNICEF and its work for children, visit www.unicef.org.