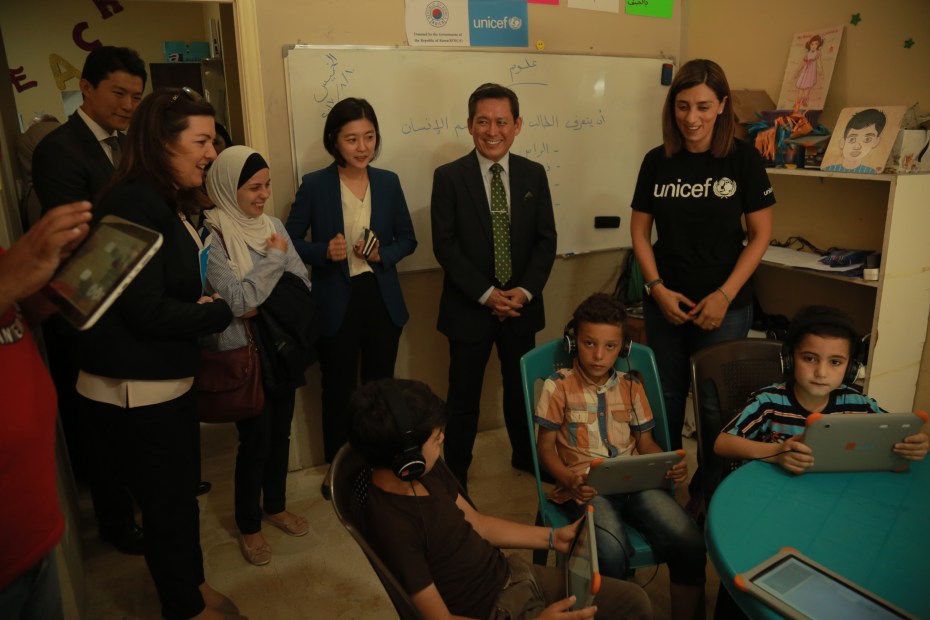 Ambassador of the Republic of Korea to Jordan HE Lee Bom-yon meets children at a UNICEF supported Makni centre in Amman. Photo credits: unicefjordan/dotmedia

The recent contribution of US$6 million to UNICEF comes as part of KOICA’s ‘Better Life for Girls’ Global Initiative and aims at directly supporting nearly 130,000 vulnerable girls and boys in Jordan over a four year period between 2017 and 2020.

KOICA Country Director Byun Sook-jin expressed his appreciation for UNICEF’s continuous work in Jordan for disadvantaged Jordanian and Syrian children. Adding that  this was a great opportunity for KOICA to cooperate with UNICEF on their comprehensive program, and create harmony between both organization’s programs to respond to the needs stipulated in the Jordan Response Plan for the Syrian Crisis.

Due to the prolonged nature of the Syrian crisis, UNICEF has shifted its programming from a humanitarian response to focusing on reaching all vulnerable children in Jordan regardless of their status, ability and backgrounds.

“Every vulnerable child in Jordan deserves to go to school, be safe from violence, have good health, and receive care and support,” said the UNICEF Representative Robert Jenkins. “UNICEF is very grateful to our key donors and supporters like KOICA whose support is helping thousands of vulnerable girls and boys in Jordan to have a fair chance to a better future for themselves and their families,” he added.

The new grant from KOICA will focus on enabling children with disabilities to pursue formal education in public schools and avail Makani centre services. Health education and related services, and improving access for children to adequate water and sanitation facilities in public schools is another critical component.

In addition, a portion of the grant will be invested in preventing corporal punishment in public schools; providing psychosocial support and care to vulnerable girls and women at risk or survivors of gender based violence, early marriage and other child protection issues. It will also contribute towards establishing exclusive Makani centers for girls and women to improve access to education and protection services for adolescent girls.

From 2014 to date, KOICA has contributed to UNICEF a total of US$ 8,950,000 (including the new contribution) towards the education, protection and well-being of all vulnerable children, including Syrian refugee children in Jordan.