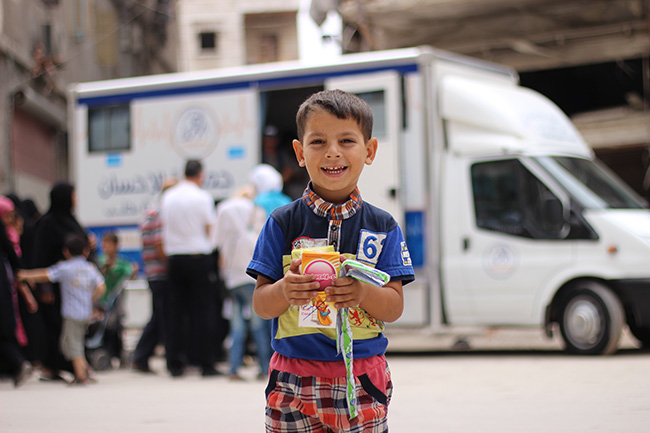 © UNICEF Syrian Arab Republic/2017/Al-Issa
A young boy who received medicine after being examined by a mobile health clinic in the eastern neighbourhoods of Aleppo city. After years of violence and destruction, there are no functioning public health centres in the area, and most families rely on these mobile clinics for healthcare services.

ALEPPO, Syrian Arab Republic, 1 August 2017 – In many cities, the sight of children and parents crowded around a big white truck on a hot summer day is not unfamiliar. Only in conflict-affected eastern Aleppo, it is not an ice cream truck gathering these children, but a UNICEF-supported mobile health clinic.

After years of violence and destruction, there are no functioning public health centres in the area, and little cash among returning families to pay for private healthcare. Children and their families now rely on mobile clinics to receive primary health services free of charge.

Every day at 9 a.m., 25 health workers in seven white trucks start their journey through the grey streets of east Aleppo. They always park close to crowded bread distribution points to reach as many people as possible. The clinics-on-wheels treat more than 400 children and women every day for common illnesses, providing medicine and immunization services, as well as micronutrients and nutritional supplements to treat and prevent malnutrition. 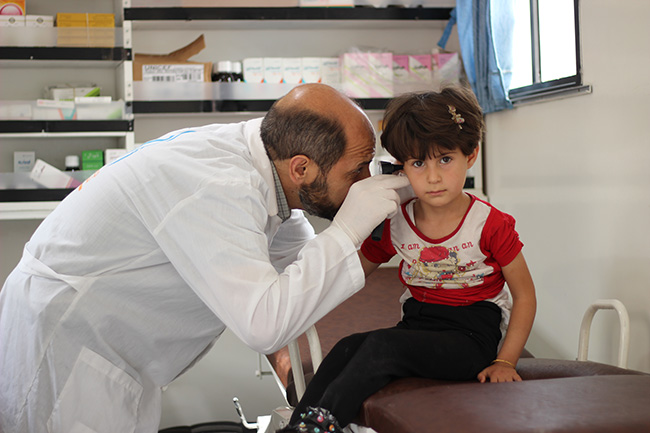 © UNICEF Syrian Arab Republic/2017/Al-Issa
A doctor examines Najat, 5, inside a mobile clinic in east Aleppo. Najat is being treated for fever and a sore throat.

“The most common cases we see are related to malnutrition, diarrhoea and water-borne diseases,” said Dr. Kamal who works in one of the UNICEF-supported mobile clinics.

“Living amidst the rubble, combined with a general lack of safe water, means hygiene conditions in the area have worsened, causing more children to fall ill,” he added.
As more people return to the area, there is increasing demand for health services.

“Although we come here every day for six hours, we barely stop work for one minute. We see one child or mother every 10 minutes while dozens of others are lining up outside in the scorching heat,” said Siba, a nurse at one of the clinics.

To help prevent malnutrition, a team of community volunteers also accompanies the mobile health clinic, passing on information to caregivers and answering questions on how to provide more nutritious diets for their young children. 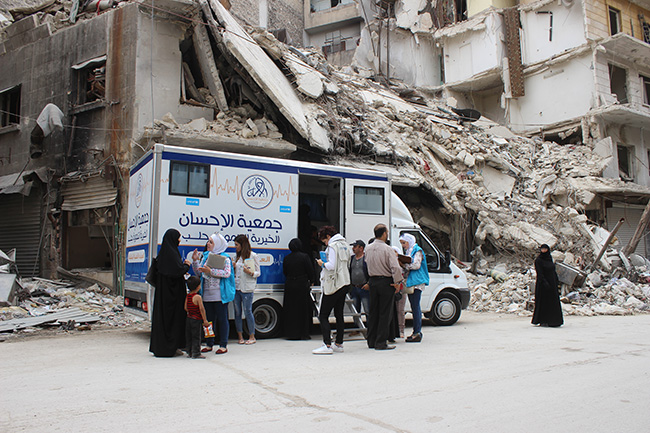 Bana, a young volunteer on the team, has observed a growing challenge: a number of Aleppo’s children have lost their parents in the fighting.

“These children are left to be cared for by their grandmothers, deprived by default of natural breastfeeding and even complementary infant feeding, which they can’t afford to buy,” said Bana. Some caregivers are improvising by preparing sugary water drinks.

But even children who are under the care of their parents face challenges as well.

“During one-on-one sessions with mothers, we hear all kinds of dreadful stories. Many women have lost their husbands and are facing the world alone,” said Mais, a volunteer who encourages exclusive breastfeeding.

“Their psychological wellbeing and lack of a support system makes it hard for mothers to exclusively breastfeed and to provide the most nutritious foods in their children’s early years of life,” she said. “So we are their support system, we’re their friends and their confidants.”