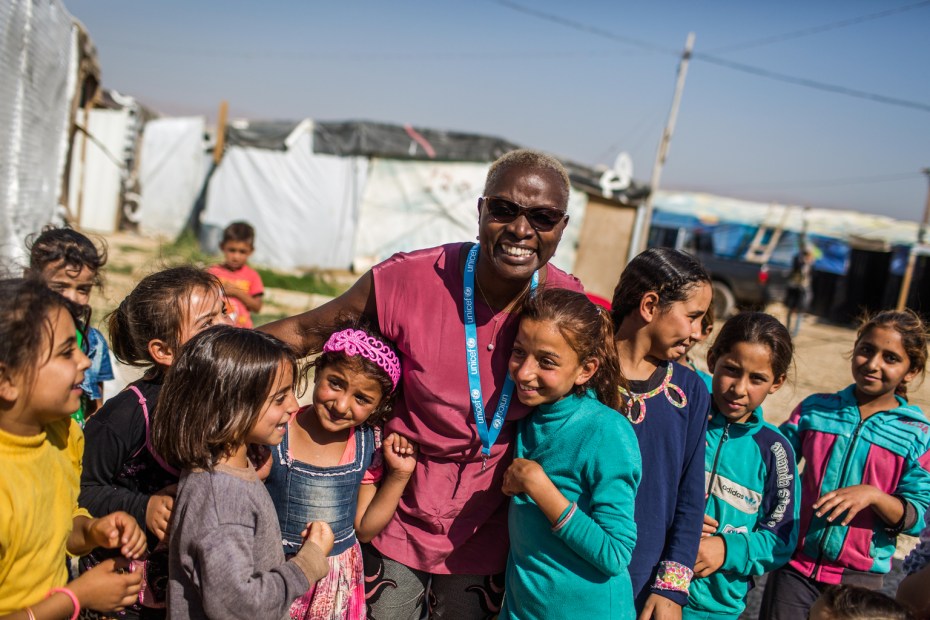 To mark World Youth Skills Day, Kidjo visited projects implemented by a UNICEF youth partner, the Lebanese NGO LOST (Lebanese Organisation for Studies and Training) in and around Zahle in the Bekaa valley. Kidjo spoke to the children and young people about the challenges they face in pursuing an education, finding opportunities, living in refugee settlements and breaking down barriers between the two communities.

Kidjo took part in a Life Skills Training and attended focus group discussions with young women whose lives have been improved thanks to a practical skills training, preparing them for the job market.

“Meeting with the girls and boys, the young men and women, you sense how hard they need to fight to hold on to a hope of a dignified future in their circumstances, At the same time, you know that what they need is within reach. Today I’ve actually seen how the training provided is bearing fruit, improving the lives of these inspiring young men and women,” Kidjo said.

Lebanon, a country which already faces a number of challenges, has been heavily affected by the conflict in neighbouring Syria. More than one in four people in the country are now refugees; the highest proportion per capita of any country in the world.

The sheer number of refugees is putting an enormous strain on the labour market and the education sector, with general poverty on the rise.

“Some of the most pressing issues facing Lebanese, Syrian and Palestinian youth are deprivation, discrimination and even a fear of the other. That’s why UNICEF is bringing together youth from all communities, particularly girls and young women, equipping them with skills and knowledge that enable them to participate in the labor market, as well as overcome persistent social and cultural divides,” said Tanya Chapuisat, Representative of UNICEF Lebanon.

On a regional level, more than six years into an unprecedented turmoil in the Middle East and North Africa, the optimism among young Arabs is waning, they feel overlooked by policymakers, and see unemployment and extremisms as the biggest problems in the region. Youth in Lebanon, be they Lebanese, Syrian or Palestinian, are no exception from the rule and often don’t have the opportunity of playing an active, positive role in the society they live in.

There are one million people aged between 15 and 24 in Lebanon, or one in six. Among Lebanese youth, the unemployment rate is 35%. The picture of opportunities facing Syrian youth is even bleaker. Only a small minority is able to generate an income, and more than nine in ten Syrians aged 15-24 are not enrolled in any formal education. Building skills and capacity, and empowering youth is therefore a driving principle of UNICEF’s work in Lebanon.

“If you want to build a durable foundation for stability in the future in the Middle East, what do you do? You work with youth and you make sure they get an education and the means of securing what’s needed for them to live a decent life,” said Kidjo, a UNICEF Goodwill Ambassador since 2002.

For more information on UNICEF’s work on the Syria Crisis visit www.unicef.org/syriancrisis

About Angelique Kidjo
West-African singer, songwriter and activist Angelique Kidjo, often referred to as one of Africa’s most influential figures, is an ardent advocate for the rights of youth, children and women. Kidjo has been awarded by Amnesty International and the World Economic Forum, and has 15 years under her belt as a UNICEF Goodwill Ambassador.

About World Youth Skills Day
July 15 is the UN’s World Youth Skills Day, stressing the right and need of learning of children and youth, and the fact that young people’s education and training are key determinants when it comes to development, quality of life and income and success on the labour market. Skills and jobs for youth are also among targets in the 2030 Agenda for Sustainable Development.