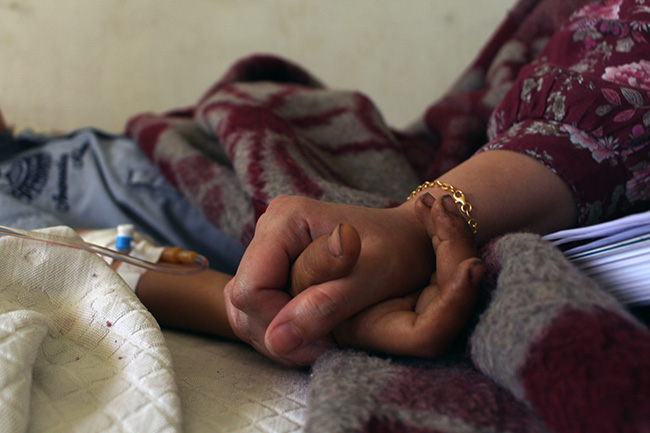 © UNICEF Syrian Arab Republic/2017/Souleiman
Khaled holds Sherin’s hand, a UNICEF child protection officer, in the hospital where he and his sister are receiving treatment.

By Massoud Hassan and Yasmine Saker

QAMISHLY, Syrian Arab Republic, 11 July 2017 – When 10-year-old Khaled and his family fled their home in Raqqa in the middle of the night two weeks ago, they were seeking safety after living through months of heavy fighting and in constant fear. They had already been displaced on three occasions, each time forced to flee with only the clothes on their backs.

But their road to safety was dangerous. Khaled stepped on a landmine, causing it to explode, injuring him and his 14-year-old sister Esraa. Khaled suffered injuries to his hands, legs and head, while Esraa’s jaw was completely shattered.

Many families fleeing the fighting have said that their journeys were fraught with danger, sniper fire, landmines and unexploded remnants of war turning exit routes out of the city into death traps. Consistent reports highlight retaliation against families attempting to flee, with the destruction of their cars and assets, as well as harassment and punishment. People have often fled at night as they fear being targeted by snipers.

From one tragedy to another

“We were walking in darkness when we heard the first explosion,” recalls Ismail, 16, Khaled’s older brother. “We then heard my cousin and her husband screaming and crying so we rushed to help them.”

“We then heard the second explosion, but this time it was my father who was screaming and crying, carrying both Khaled and Esraa on his arms,” adds Ismail, who had to rush his severely injured siblings and relatives to three different hospitals in Hassakeh, Qamishly and Kobani, looking for treatment.

Only a month ago, the family lost an older daughter and her two-month-old baby girl in a landmine explosion.

“We were so focused on avoiding stray bullets and shelling. We didn’t pay attention to the landmines,” says Khaled’s mother, recalling the tragic day.

Khaled’s family is only one of the thousands of others forced to leave their homes in Raqqa to flee the ongoing fighting. Some 200,000 people have been internally displaced since November 2016. Some are living in desert camps in Hasakeh and Raqqa governorates. Others have been displaced further afield to Aleppo, Idleb, and Hama.

Many travelled for weeks with little food and water, staying in the open. But the harsh living conditions in Raqqa are also another reason forcing people to leave their homes. Little aid reached Raqqa in the past four years. The last United Nations inter-agency aid convoy to Raqqa was in October 2013.

“We used to go from one roof to another, searching for some water left in tanks in empty houses left behind by people who fled,” said Khaled, recalling the hardship they faced to get safe drinking water.

A slow road to recovery

Back in the emergency ward of Qamishli hospital, Khaled and Esraa are recovering slowly, but the psychological scars take longer to heal.

“Khaled and Esraa are amongst the many children who are living in a constant state of fear due to the violent conflict,” said Sherin Murad Ismael, Child Protection Officer in the UNICEF Qamishli field office.

“Parties to the conflict have a responsibility to protect children who have already suffered years of brutal war,” she added.

Khaled is in pain, he can talk barely. But he is grateful that he is still alive and out of Raqqa.

“I have lost so much in this war, but it will all pass, as long as I am alive,” he said.

Mobile health clinics have been set up to provide primary health care, including immunization services for children and their mothers, while much-needed nutritional supplements are distributed on a regular basis. Child friendly spaces have also been set up to engage children in recreational activities as a form of psychosocial support to help them cope with their trauma and to restore a sense of normality into their lives.