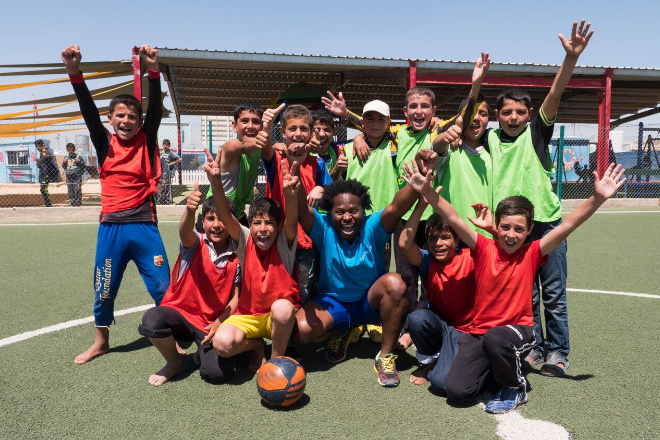 ‘Your life doesn’t stop when you become a refugee’

By Malene Jensen and Salim Oweis

AMMAN, Jordan, 20 June, 2017 – “No one wants to flee their home,” says Ishmael Beah, author and UNICEF Advocate for Children Affected by War, following a recent visit to Jordan, where he met with children and young people uprooted by years of conflict in neighbouring Syria.

Beah knows that first hand. Nearly twenty years ago, he fled fighting in Freetown, Sierra Leone, as rebels closed in on the capital threatening the then 17-year-old with being dragged back into a brutal conflict. Just months earlier, he had with UNICEF’s help been demobilized as a child soldier.

What followed was a nerve wrecking journey to Conakry by bus and on foot, and eventually onwards to the United States. “I was one of the lucky ones because I had a passport and could get out,” said Beah.

“But it’s hard to leave home,” he said. “I never felt at peace anywhere really. I had a good life in other places but there was always something missing. When I went back home the first time I realized exactly what that was.  It was because I wasn’t in my own country. Even the smell of the air does something to you because it’s home.”

Millions of children are refugees

As we mark this year’s World Refugee Day on 20 June, some 21 million men, women and children worldwide are refugees. They have been uprooted from their countries, homes, schools and lives, and often separated from family and friends. Of those, nearly 2 million are children from Syria now living as refugees in Jordan, Lebanon and Turkey.

With the support of host countries, UNICEF through funding from the EU Regional Trust Fund in Response to the Syrian Crisis, is providing hundreds of thousands of these children and young people with access to basic needs such as education, protection, a say in shaping their own futures and opportunities to make sure that they do not become a lost generation.

Both refugees and vulnerable host communities benefit from the assistance, which helps support social cohesion.

During his visit in April, Beah, who has written about his experiences from war in the internationally acclaimed book, “A Long Way Gone, Memoir of a Child Soldier,” met with children and young people in Za’atari refugee camp on the border with Syria.

The Los Angeles based father of three also attended a UNICEF and EU-supported regional youth workshop for refugees and vulnerable young people in host communities.

The workshop was part of the ongoing training for dozens of young people to become researchers and collect information from their peers about shared challenges and then find constructive solutions.

“Because you’re a refugee, it does not mean your life stops,” said Beah, whose message to the international community is to listen to those who are going through the experience to best identify and support needs.

“Often people think that those who are suffering are not thinking deeply about their situation,” he said.

But that’s not at all the case, he said, a message he also heard from the children and young people he met in Jordan.

“They know that having an education is something no one can take away from them,” said Beah, highlighting the importance of the international community’s continued support for access to learning for girls and boys.

“They are not giving up so I don’t think anyone should give up on them.  They need support so they can get an education.”

The visit to the region was deeply personal for Beah, who recognized some of the many challenges that the children shared – including losing loved ones, but also vital documents from birth to graduation certificates that creates obstacles to re-enter school and rebuilding their lives.

“Nobody leaves home if things are functioning,” said Beah, after hearing the powerful stories of Syrian girls who had seen war first hand but also of their love for Syria and a desire to return.

“They only left because they had no choice,” he said. “They just want the war to stop in their country so they can go back and pick up from where they left off.”

The EU Regional Trust Fund in Response to the Syrian crisis has provided UNICEF with nearly €200 million Euro in providing refugee children and host communities with access to learning, protection and engagement.

Ishmael Beah was appointed UNICEF Advocate for Children Affected by war in November 2007. His second book, a novel, titled Radiance of Tomorrow, is also set in Sierra Leone and was published in 2014.