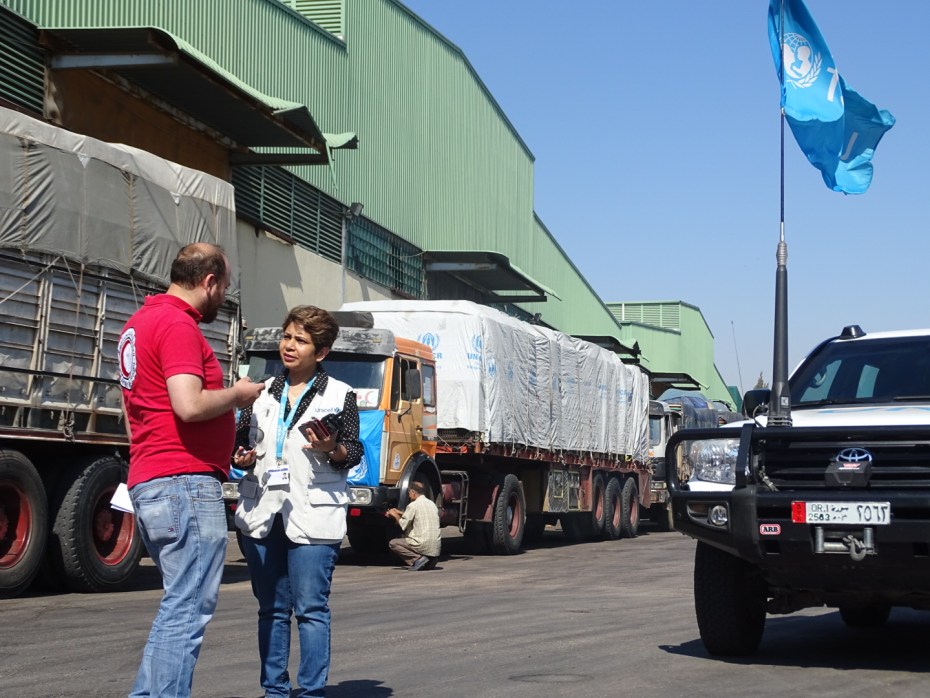 On 15 June 2017, I was part of a joint humanitarian convoy led by the United Nations, the International Committee of the Red Cross and the Syrian Arab Red Crescent. We delivered food, health and hygiene supplies to around 100,000 people in Talbiseh, Homs and Tlul El Homor, Hama. It was the first time humanitarian aid was allowed into Talbiseh in almost three months.

After waiting for hours at checkpoints, we reached Talbiseh at around 6:45 p.m., one hour before Iftar, the fast-breaking evening meal during Ramadan, the holy Muslim month of fasting.

This was my second visit to Talbiseh, a town 15 kilometres away from the city of Homs. Homs is a city of 90,000 people which aid organizations are unable to access regularly.

I remember the emptiness and silence on the streets when I last visited in March. The destruction was beyond imagination. Residential buildings, schools and hospitals have been completely destroyed, putting the facilities out of service. Some schools had been turned into shelters for internally displaced people and couldn’t be used for education.

Compared to my last visit, I noticed more signs of normal life returning to the city. I saw more children on the streets, and many open shops offering fresh produce, eggs, meat and other supplies for Iftar.

As soon as we entered Talbiseh, the offloading of supplies started. The UNICEF team was taken to the only functioning hospital in the town. The senior doctor took us to the basement of the building. They had moved the entire hospital underground, because the first floor had been destroyed by attacks.

The partially functioning hospital was the only facility to provide medical services to the 90,000 residents of Talbiseh. Another health centre, run by the Syrian Arab Red Crescent, was under renovation. In the few other primary health centres in the town, services were reduced to immunization. They lacked sufficient vaccine supplies, which have resulted in high ‘dropout’ rates for immunizations in children under five years old. As a result, children are not returning to complete their vaccinations, leaving them unprotected from potentially serious diseases.

The field hospital had an emergency unit, an intensive care ward, two surgery rooms, an orthopaedic section, a laboratory, and x-ray units. It lacked equipment and medicines. Doctors told us that they received many complicated newborn and paediatric cases, but the hospital wasn’t equipped to treat them.

Health staff mentioned an alarming rise in child marriage over the past few years. According to the Syrian Arab Red Crescent team in Talbiseh, 70 per cent of marriages in 2017 are among children. More than half of the women who visit the health centres to deliver babies were children under the age of 16. Teen pregnancy has become common, with girls as young as 14 giving birth, leading to numerous health problems for them and their infants.

After Iftar, I met with two teachers who came to Talbiseh from Tlul El Homor, a neighbouring town in Hama. The teachers described the devastated state of education in their area. They said that only five schools are functioning, while another five have been severely damaged. The functioning schools are only partially furnished, with many children forced to sit on the floor during classes. Schools lack educational materials, including textbooks. Almost half of school-aged children are forced to drop out of school. Most of the boys work on farms to support their families, and the girls get married very young.

They also described a lack of qualified teachers. Only a few teachers are on the payroll and receive their salaries, while many others volunteer their time because parents want their children to continue going to school. The two teachers pleaded for more, and urgent help, including additional qualified teachers, school furniture and learning materials.

During both my trips to Talbiseh, I was so moved to witness the bravery of the doctors, health workers and teachers who are doing everything they can to serve their community. It was encouraging to see children trying to have a normal childhood amid endless violence. They are determined to go to school and to not let the war get in the way of their hopes and dreams of becoming teachers, doctors and engineers.

In Talbiseh and other hard-to-reach and besieged, children’s need are extremely acute. It is our duty to provide them with the critical assistance they need to allow them to reach their full potential. UNICEF is ready and willing to do exactly that, but we need unconditional and sustained access to reach all children in need across Syria.