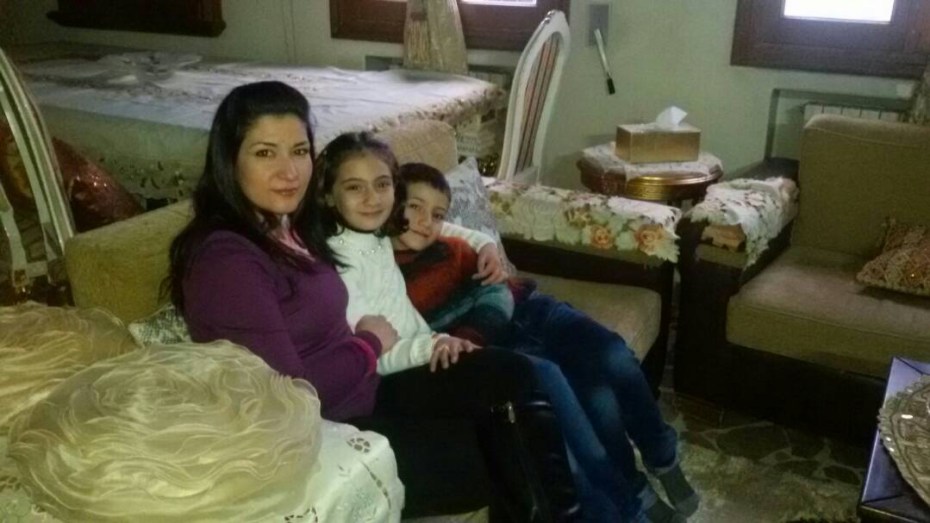 The author and her children

A blog by Dima Khayyata

Being a mother is miraculous.

But for me, being forced live far away from my children just to put bread on the table, has turned this blessing into a curse.

Being a Syrian mother in this time of war is my life challenge – a reason to fight, survive and win. This is what I tell myself every morning before I head off to work. I think of my two children who I left in war- torn Aleppo while I work in Homs, a 4-hour drive and 12 checkpoints away.

I am a single mother of two beautiful children; Nehal, my eight year-old daughter, and Taymullah my six year-old son.  For most of their lives, we lived in southern rural Aleppo, until that one summer night.

We had gone to bed to sounds of heavy clashes which we had gotten used to. “We’ve seen worse days,” I kept telling myself.

But at 5 am, it turned out we hadn’t. The house started shaking and the sounds of fighting were overcome by screams of women and children. The speakers of nearby mosques instructed us to immediately shelter in basements.

We had a basement but it was in no way equipped and lacked water, electricity, food and fuel. It was a hot night and over 30 of us took shelter in that small room of less than 50 square meters with a tiny window that barely gave allowed in enough air.

Whenever a rocket hit the ground, we could see flames from that window. Children covered their ears with their hands while they screamed and cried.

For a moment, time stopped. It felt like we were going to be trapped in that shelter forever. But then my survival instinct kicked in. “We will survive,” I thought to myself. “We still have dreams, hopes and families to live for.”

We did not stay in that shelter forever, but we did stay for 10 days and they sure felt like a lifetime.

We waited for pauses in the shelling and ran up to our homes to gather any food we could find to feed the children. We managed to bake bread and make lentil soup using a small gas stove. We had some thyme and cheese to get by on.

With help from my neighbours, I removed my car battery and connected it to a light bulb in the shelter to generate electricity. Some of the men would fill jerry cans from a nearby well but it wasn’t clean.

While we were in the basement, a 9 year-old girl was hit by a stray bullet in her hip. One woman gave birth to a beautiful baby boy. We only had a mobile team of volunteers with basic medical experience to help the mother and baby. We took care of them in shifts until they recovered.

We did everything together in that small basement: cooked, chatted, played cards, sang, laughed and cried. But most importantly, we survived.

When we were finally able to leave, took buses to Aleppo city, under shelling and sniper fire. It was a nightmare, a lesson of adapting to the harshest possible conditions, but I couldn’t allow myself to cry. I had to be strong to give my children hope.

We finally arrived at my parents’ house in Aleppo. We were 5 kg lighter, but at least we were alive. All my children could talk about was how much they missed that blonde baby boy whose birth they witnessed.

I moved on from that ordeal, recovered, and joined WFP for a year before joining UNICEF in October 2015. I had survived until ill-fated day came.

I was spending the summer break with my children in Damascus when my son spilled a boiling kettle of coffee over the left side of his body. It was noon on a Friday, a weekend in Syria and the time of Friday prayers. There were no cars around, no open pharmacies, no one to help as I ran up and down the street to get help for my son who suffered second degree burns.

That night, I heard my son cry “Dear God, please take me.”

I choked. My heart broke when he told me that he couldn’t endure the pain any longer. I eventually found a pharmacy and got him medicine and ointments. He slept in my lap, shaking to his core.

The following day, I had to go back to my duty station to participate in my first cross-line mission with UNICEF, to Ar-Rastan in rural Homs.

In Ar-Rastan, I saw children the same age as my own who were helpless, hungry and sick. I saw my son’s traumatized face in each one of theirs, wondering if they ever asked God to take them like Taymullah did. I will never forget the 12 year-old boy I saw who lost his ankle in an explosion.

Despite everything those children had gone through, the smiles I saw on their faces changed my life forever. Theirs are smiles of resilience and hope, of seeing the light at the end of a long and dark tunnel.

I’m honoured to be serving these children with my colleagues, in Homs and everywhere in Syria.

It’s a life calling- and my life has just started.

Dima Khayata is a programme assistant working with UN