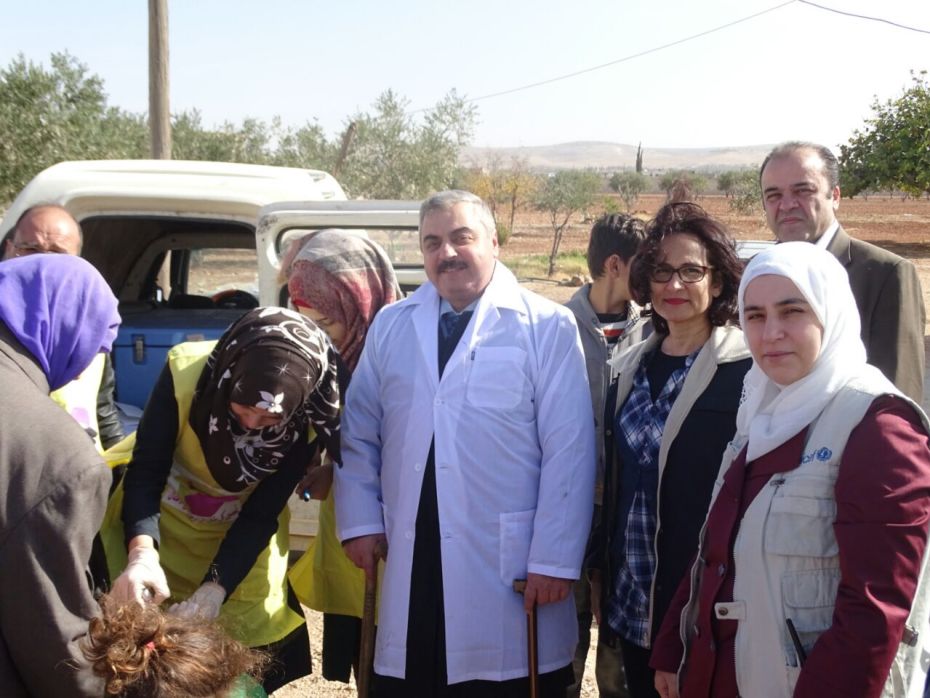 ©UNICEF/Syria 2017/ Hama  Dr. Majid, together with UNICEF staff members, during door-to-door visits to vaccinate children against polio in Suran, in the Governorate of Hama.

HAMA, Syrian Arab Republic, 11 May 2017 – Dr. Majed contracted polio at the age of 7 months. He grew up determined to protect as many children as possible from this life-threatening disease.

Polio is highly contagious, and young children are the most vulnerable to infection. The disease attacks the nervous system, which can cripple or even kill them. Vaccines can keep children healthy – and alive.

“It’s a priceless feeling to vaccinate a child against polio,” says Dr. Majid who dedicated his life to saving children from the vaccine-preventable disease. “I know I can change their lives forever.”

The Syrian Arab Republic had been polio-free for years, but in 2013, . Together with the World Health Organization (WHO), the Ministry of Health, and the efforts of committed physicians like Dr. Majid, UNICEF was able to prevent the spread of the virus, and save millions of children from disability and death.

“Having been affected by polio since a young age, I always felt that I couldn’t keep up with my peers. I’d leave to school an hour earlier than everyone else so that I can get there on time. When my friends wanted to play football, I had to ask them to change the game. Even at university, I avoided befriending people who walked fast,” says Dr. Majed, describing some of the challenges he faced as a child.

“This has all motivated me to invest fully in the national immunization programme,” he says.

To make sure that all children are vaccinated, UNICEF supported health workers to conduct home visits to inform parents about the dangers of polio and to immunize their children.

The campaign provided immunization services through 1,300 fixed health centres and over 150 mobile vaccination teams across the country.

After six years of war, Syria’s immunization coverage has dropped from 80 per cent pre-conflict to 41 per cent in 2015. In some of the contested areas, routine immunization has completely stopped.

Dr. Majid’s hometown is Suran, a city in the Governorate of Hama. After six years of conflict, the only hospital in Suran was completely destroyed, and forced to shut down.

Dr. Majid played a huge role in mobilizing and educating parents during the home visits conducted with other health workers in Suran. “I believe that I contracted polio to be a real-life reminder for parents about the consequences of their children missing out on vaccinations,” he says.

“We can eradicate polio for good through immunization, I don’t want to see children suffer the way I did.”