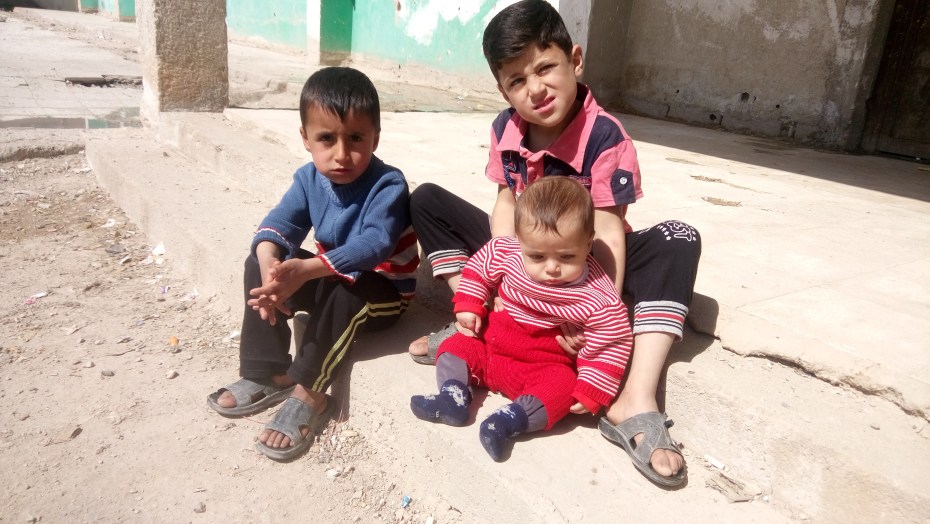 Nabil, and his younger brother Mohmmad and sister Lana play in Al-Khadra school yard in Dara’a city. The school has been turned into a shelter for 40 internally-displaced families.

Continued violence and insecurity in Syria have driven 6.8 million people from their homes.  Amid the severe deprivation and uncertainty that come with displacement, mothers like Nada, 28, draw on whatever support they can get to meet their children’s basic needs while aspiring for a better future.

Dara’a, Syrian Arab Republic, 4 April 2017 – Nada and her family fled their hometown of Al Shajarah in Dara’a Governorate after it was overtaken by warring parties more than three years ago.  Now they have taken shelter, along with 40 other internally-displaced families, in a former school in the nearby city of Dara’a.

The memory of their flight evokes bitterness and despair for the 28-year old mother.  “I will never forget the day we escaped our hometown under constant shelling,” she says.  “We ran away with nothing except the clothes on our back.”

Nada, her husband Ahmad and their three young children currently share a small classroom with 29 year-old Suheir and her family who fled from Heet village, also in Dara’a.

Living conditions are barely tolerable in the school-turned-shelter.  Only a white cloth separates the two families’ living spaces.  The rooms are damp and cold. Just two bathrooms serve all 40 families, with no hot water for bathing amid freezing winter temperatures. And there is not enough safe water to drink.

The families residing in the shelter get their drinking water from UNICEF and its partners.

“We receive water every three days, but it is not enough to meet the needs of all families,” says Nada.

But despite these difficulties, Nada is full of determination and courage.

“Both Suheir and I learned how to make the best of living together,” says Nada pointing to the tiny space.  “We cook together, we help each other in cleaning the room, and our children play together,” she adds with a smile.

Two weeks ago, Nada and Suheir’s children were vaccinated against polio through a UNICEF-supported national immunization campaign, which reached over 2 million children under five.

“Vaccination is critical in times of war,” says Hanaa Singer, UNICEF Representative in Syria.  “UNICEF teams together with our heroic national health partners who work under extremely challenging circumstances. They make extraordinary efforts to vaccinate the largest possible number of children including those in hard–to- reach and besieged areas,” she explains.

Struggling to get by

Since the onset of the conflict in Syria, Nada and her husband had to sell off their belongings to make ends meet.  Her husband’s meager monthly salary of less than US $80 leaves the family unable to cover their monthly expenses.

“We sold all of our electrical appliances at a fraction of its original cost,” says Nada with a grin.  “I even had to sell my gold, which was part of my dowry.”

For Nada’s family and many others struggling to get by amid harsh conditions, the 10,658 children winter clothing kits distributed by UNICEF and partners in Dara’a Governorate this winter were invaluable.  Each kit contains child underwear, pants, tops, shoes, socks, gloves, a hoodie and a scarf to keep warm.

Nada received three kits of winter clothes for her children.  It was a great relief especially since her youngest child, 3-year-old Lana, had already fallen sick several times as the family endured the winter cold.

“The winter clothes will keep my children warm, and will save us the burden of borrowing money to buy much needed clothes for our children,” says Nada with a smile.

For Nada’s sons, 6-year old Nabil and 5-year old Mohammad, the brutality of war is the only reality they have ever known.  This is visible when they play.  Like many other children around them, Nabil and Mohammad favour war games.

“When we arrived to the shelter, my sons used to play military games with the children here,“ says Nada, clearly saddened by the thought.   “They would pick up wooden sticks and play ‘soldiers’.”

To help children like Nabil and Mohammad recover from the horrors they have endured, UNICEF provides psychosocial sessions for children.

Nada and Suheir are among the millions of Syrian mothers who wish for nothing else but a better world for their children.  “All we want is for peace to prevail,” says Nada.

As an educated woman, she is a strong believer in the importance of education.  “I want to provide my children with the best education,” she says.

“My oldest son Nabil wants to become a physician when he grows up,” she adds. “And I will do whatever I can to make his dream a reality.”