It has been over 100 days since people in the four besieged Syrian towns of Madaya, Zabadani in Rural Damascus and Kefraya and Al-Foah in northern rural Idleb, received any humanitarian assistance. Provision of aid to the 60,000 people who have been trapped under a years-long siege in these towns is restricted by the “Four-town agreement,” an arrangement that further complicates humanitarian operations. On 14 March 2017, UNICEF was part of an inter-agency convoy to the area and delivered much needed nutrition and medical supplies for 30,000 people in the four towns. 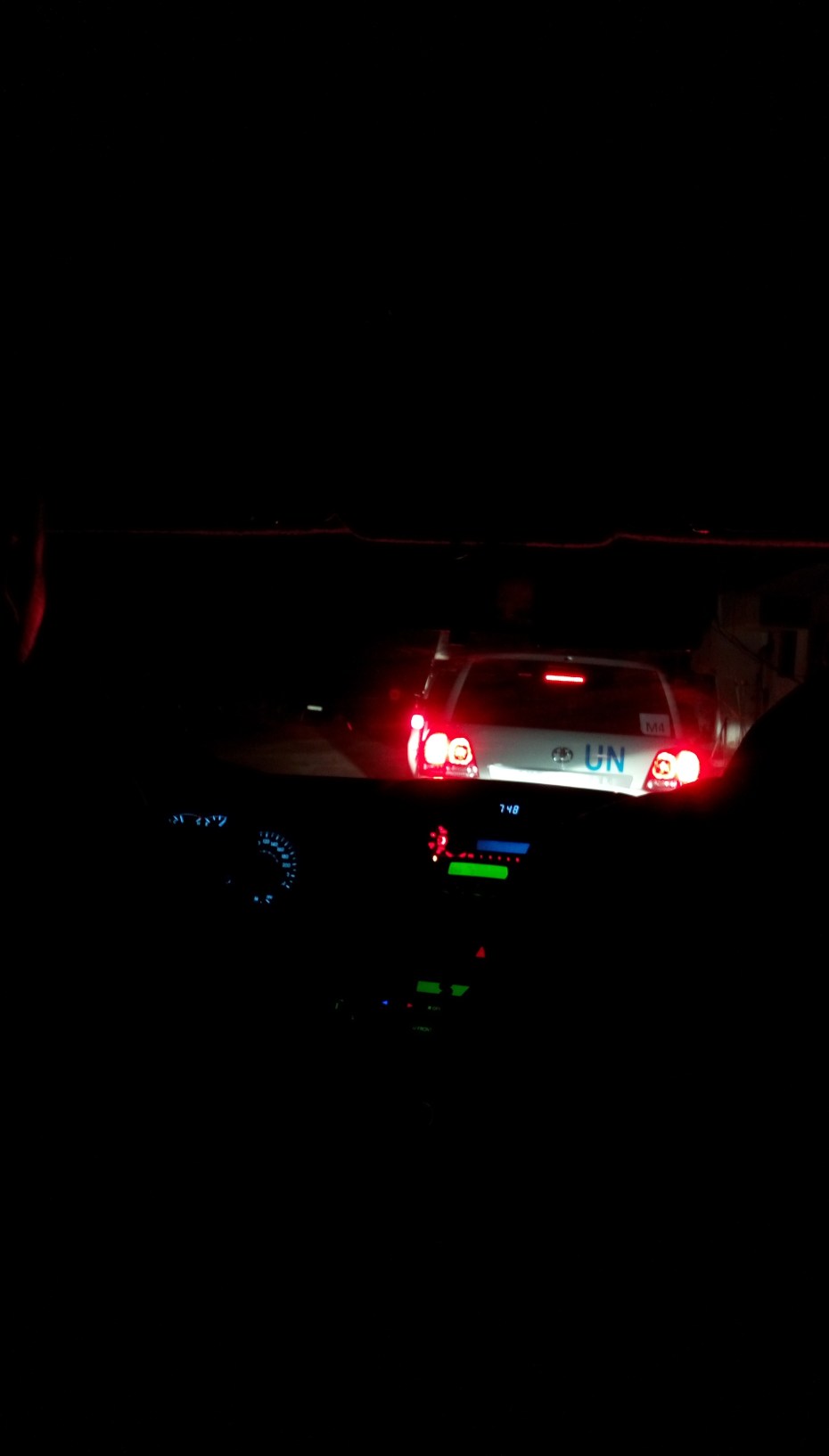 ©UNICEF/2017/Syria/Madaya
After hours of waiting and as it gets dark, a humanitarian convoy proceeds to enter Madaya.
UNICEF team accompanied the delivery of humanitarian assistance to the besieged Madaya town, home of over 40,000 people who have been trapped under siege for over two years. UNICEF delivered much needed health and nutrition supplies to 20,000 people living in Madaya.
This is the first humanitarian convoy to reach the four besieged towns – Madaya, Zabadani, Foah and Kafraya – since the beginning of 2017. The last aid convoy to reach the towns was in November 2016.

It was not my first mission to a besieged area in Syria. But the many years of war here are not enough for me to get me used to it – nor can I get used to the suffering we witness every time I am part of a humanitarian convoy to areas under siege.

Before heading to Madaya that day – my first time participating in a humanitarian convoy to the area – I thought of the town as a place split between two realities; one of complete despair, and another offering glimmers of hope. I was reminded of the painful images and stories of Ali, the severely malnourished child who died right in front my colleagues’ eyes; Lama*, the seven-year old girl who was shot in the foot by a sniper while collecting water for her family; and Reema*, the young widowed mother of two who attempted to kill herself after her family tried to force her to remarry.

But there was always that silver lining of hope. It was eight-year old Muhammad, who almost died of malnutrition but survived after the local health team treated him with UNICEF therapeutic supplements. It was the 50 children I met last summer who took their national exams with UNICEF’s support and who dreamt of building a better future for the country. The cheeky laughter of the boys teasing each another about a girl one of them liked. It was the town’s heroic health team equipped with the bare minimum serving people in need.

It was already dark when we entered Madaya. The town has been cut-off from electricity for over two years. Ghostly figures appeared behind the dimly-lit windows, watching the convoy as it moved slowly through the town.

As we drove through the town, watching children come out to meet the convoy in the freezing cold, wearing winter clothes provided by UNICEF in a previous mission, I thought to myself:

How does it feel after two years of besiegement for your life to depend on what humanitarian convoys bring you? What is it like to wait for almost four months for your only lifeline? How does it feel to not know whether the next meal you give your children will be their last one? 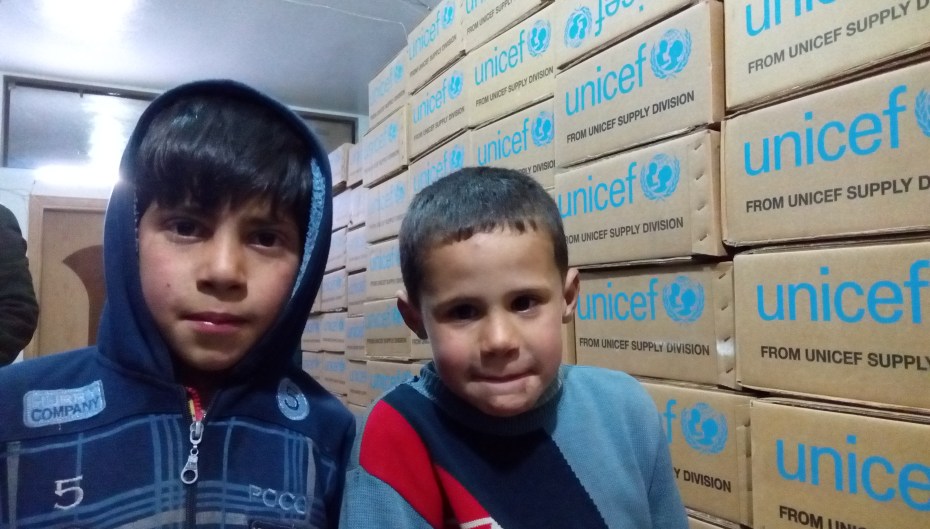 ©UNICEF/2017/Syria/Madaya Ahsraf, 11 and his friend Ali, 9 standing in the town’s only health centre. “I play at home because school is closed,” Ashraf says. On 14 March 2017, UNICEF delivered much needed health and nutrition supplies to 20,000 people living in Madaya. This is the first humanitarian convoy to reach the four besieged towns – Madaya, Zabadani, Foah and Kafraya – since the beginning of 2017. The last aid convoy to reach the towns was in November 2016.

During the past four months, the situation in Madaya has worsened drastically. Snipers and shelling have increased and the violence impacts every aspect of people’s daily lives. “I haven’t seen my mother in over a month because last time I tried visiting her, a sniper shot at me. It is not safe anywhere in Madaya,” said the town’s only nurse minutes after she walked out from the primitive operating room where she was helping a veterinarian-turned-surgeon operate on an injured patient.

Everyone we met was quick to recount their personal experiences. A nine-year old boy said: “My friend was killed. He was sitting on the balcony and a shrapnel slashed his neck. I saw it, and I fainted.”

“Children are traumatised,” the nurse said. “What they are witnessing is severely damaging their psychological wellbeing. The other day a three-year old child watched his mother get shot by a sniper. He kept screaming hysterically,” she continued. A young volunteer teacher added:  “War and siege are the only thing that children know in Madaya. If I ask young children about a word that starts with the letter ‘G’ they will say ‘gun’; they will say ‘mortar’ for a word that starts with ‘M’.”

The spike in violence in Madaya has prevented thousands of children from getting an education. “Parents are too terrified to send their kids to school.” explained the teacher. “School windows and doors were damaged by the fighting, making the classrooms extremely cold and poor environment for learning. We have already chopped up all the wooden desks and used them for heating. We used to lay blankets on floor for the children to sit on during class.”

Teachers are doing everything they can to help Grade 9 and 12 students who will sit for their national exams next summer.  The future of these children depend on them passing these exams and getting certified to continue their higher education.  Siege and restricted movement of civilians inside Madaya is preventing children from attending lessons and studying for their exams.

“This is the first time I leave my house in three months,” the teacher continued. “Sometimes I use WhatsApp as a tool to explain the lessons we study, but it is not enough. We need the violence to stop for one month. All I need is one month of peace to help my students prepare for their exams.”

Standing in the hospital, a young man approached me. “Miss, miss, do you remember me?” It was Rami*, one of the children I met last summer when they were taking exams. I was happy to see him and wanted to check on him and his fellow students. “Do you remember my friend Ammar?” he asked me. “He was killed last month. He wasn’t feeling well, and his father brought him to the hospital. A sniper shot him on the way.” For a split second, all I wanted to do was to stop, sit on the floor and burst into tears, but that was not an option.

Ammar had wanted to become an Information Technology Engineer. “These times are all about technological development, I feel that it will help us build our society. Instead of destroying our country, we can help to build it,” he told me back then.  Now, Ammar and his hopes for the future are gone.

As we left Madaya, it pained me to leave behind all those who are suffering in such dire conditions.

For me, Madaya is the shaking mother pleading with us to take her sick child away from there, the reality of children whose games revolve around war and siege; of children as young as 15 working in the crematory burning plastics to generate fuel for heating and cooking. But Madaya is also Rami’s* resolve to retake the exam he failed last year, the young teacher who is still determined to finish that last year of law school, the courageous nurse who works from 5 am to 10 pm in the hospital, and conducts home visits to treat those who cannot reach the clinic.

Until all sieges across Syria are lifted, Madaya and the many other besieged areas just like it, remain a two-sided reality aspiring for peace and normality.  “We only need peace,” a young man told me. “We need to feel safe and lead normal lives again.”