Highlights
 UNICEF and partners continue the implementation of the 2016-2017 winter assistance programme in Syria and in the five neighbouring Syrian refugee host countries, helping thousands of vulnerable Syrian families protect their children from the cold. So far, a total of 1.6 million children (target 2.5 million) were reached with at least one of the following interventions including distribution of winter clothing kits (about 650,000 children); thermal blankets (about 318,000 children); high energy biscuits (4,000 children); mobile health services or vaccinations (about 752,000 children); cash assistance (over 310,000 children) and delivery of fuel to ensure school are heated (over 229,000 children). UNICEF’s winter appeal was about 70% funded.
 UNICEF in Iraq and Egypt have a critical funding gap against their 2017 Regional Refugee and Resilience Plan appeal for support to Syrian refugees, with only 6 per cent and 14 per cent respectively of the UNICEF 2017 appeal for Syrian refugees received as of end of February 2017. Donor funding is critical to enable UNICEF to continue its response to vulnerable populations through its partners.
 Arsal, a Lebanese town on the eastern border with Syria, hosts over 40,000 Syrian refugees which exceeds the Lebanese population by 15 per cent. Access to adequate sanitation, potable water and solid waste management has become a trigger of tension and adversely affecting social cohesion between the host community and refugees and is facing a looming health crisis.
 UNICEF, despite continuing challenges to humanitarian access, has reached about 230,485 people in 152 hard to reach locations with life-saving interventions and critical services, and delivered supplies for about 3,663 beneficiaries in five besieged areas through different modalities of delivery. 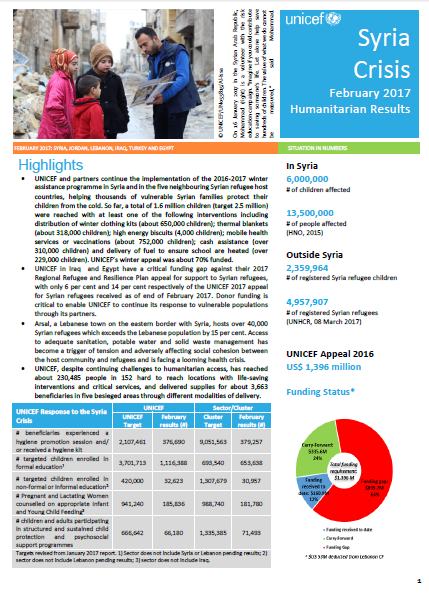