By Monica Awad and Basma Ourfali 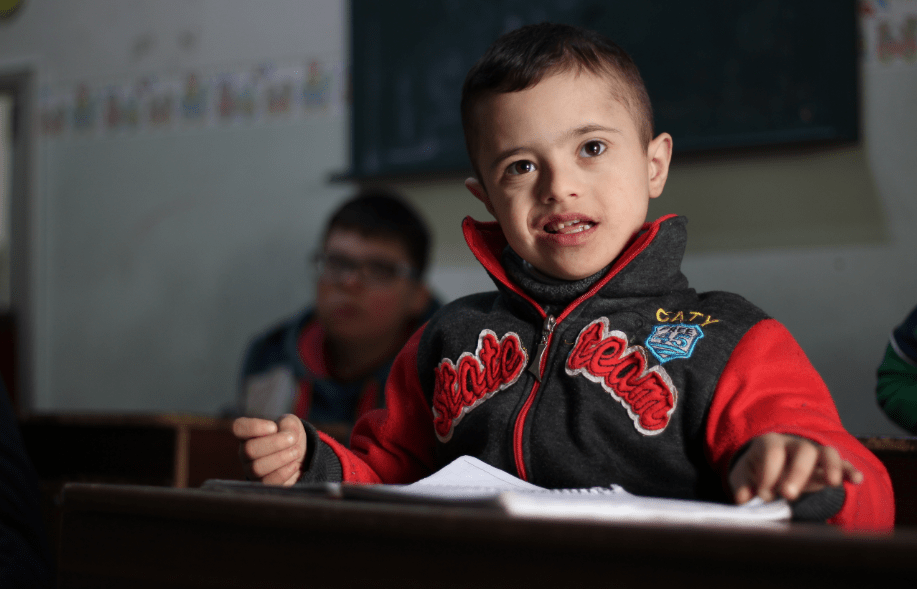 Aleppo, 6 March 2017 – For 10-year old Nasrallah, being part of the UNICEF cash support programme for children with disabilities is making life more bearable.

Nasrallah has down-syndrome and is among the most marginalized groups of children in war-torn Syria.  Like all children with disabilities, he is confronted with daily discrimination, which is further exacerbated by the brutality of war.

Two years ago, amid intensifying violence, Nasrallah and his family fled from their home in Idlib.  “Fearing for our children’s lives, we had no choice but to flee to West Aleppo,” says Nasrallah’s father, Basel.

Innovative initiatives for children with disabilities

The first ever cash programme promoted by UNICEF in Syria provides children with opportunities to access services despite on-going violence. Thanks to the generous contribution of the German Government, the current programme aims to reach up to 4,250 children with disabilities in Aleppo in 2017, with a plan to scale up during the year in other parts of the country.

“Our vision is to help families respond rapidly to the needs of their children and provide them with the flexibility they need to fulfil their responsibilities as parents,” says Cristina Roccella, UNICEF Syria Chief of Social and Child Protection Programmes.

On a bi-monthly basis, the cash support programme provides US$40 per child to families of children with disabilities.  The families are selected based on agreed criteria, which include complex disabilities such as autism, intellectual disability, cerebral palsy and other disabilities.

“With the help of our social workers, we identify these children and closely monitor the disbursement of funds. Social workers then conduct an in-depth assessment of the needs of these families, and follow them throughout the programme, helping them to find the responses they need for their children” adds Ms. Roccella.

Al Haram, a money transfer agency, wires money directly to the families in the programme. Seeing an aptitude for tennis in young Nasrallah, and as a professional tennis coach, Nasrallah’s father, Basel, started training him at an early age.

“Children with disabilities are children with hidden talents,” says Basel.  “I am keen on coaching children like Nasrallah to play tennis,” he adds.

Nasrallah who has been practicing tennis with his father won the gold medal in a tennis tournament for children with disabilities in Syria.

“I want to become like Rafael Nadal,” says Nasrallah with pride in his eyes.

The cash support programme is helping to reduce the impact that the brutal conflict has on the most vulnerable families by supplementing their income to improve their access to food and basic services such as education and health care.

Nasrallah suffers from a digestive condition which causes him to vomit and increases his risk of dehydration. Nasrallah requires a special diet, adding to the financial burden on the family.

“The cash support programme for children with disabilities helps us to get the right food for our son. We cannot afford it otherwise,” says Basel.  “Nasrallah needs quality food to strengthen his body and allow him to pursue his dream of playing tennis,” he adds.