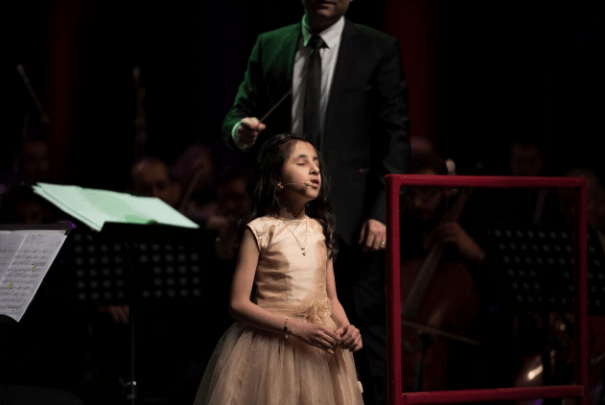 16 January 2017- Damascus, Syria – “I didn’t need to see them to know that the audience enjoyed my singing. I could hear their cheers and feel their love,” recalls 10 year-old Ansam as she remembers the day when she and 100 other children from across Syria took to the stage of the Damascus Opera House to perform music and dance in front of an excited crowd.

Ansam and her two sisters have been blind since birth.

Loud clapping rippled across the auditorium as Ansam sang traditional Arabic songs by Um Kulthoom – the Arab world’s most renown singer, famous for the spontaneous applause that infused her performances. Ansam also performed new songs of determination and hope for a peaceful Syria.

The young girl quickly had the audience in raptures. “My mother has a beautiful voice too so I like it when we sing together,” she told them right after she sang a few verses of her favorite song. “She helps me memorise the lyrics and explains them to me because I always choose heavy adult songs,” Ansam giggled to much laughter.

The UNICEF team first met Ansam in December 2016 at the first-ever children’s concert organized by AWTAR, a UNICEF partner working in Damascus to provide new types of psychological support for children. The approach uses music, art, drawings and theatre to promote the psychological well-being of children affected by the conflict.   As part of this project, AWTAR produced 21 songs full of messages of hope, resilience, and resolve, which were inspired by the children themselves.  The songs are currently being used psychosocial support activities in 16 shelters across Syria hosting internally displaced families.

At the UNICEF-supported shelters, volunteers use music to help children who have witnessed the horrors of war to release stress, socialise and express themselves. The psycho-social centre gives them the space to be creative and rebuild their confidence despite the many challenges they face.

Ahead of the concert organized for UNICEF’s 70th Anniversary, Ansam, the children’s choir and others who participated in the colorful event were trained to sing and play instruments by a team of professional Syrian musicians for several weeks. The children also produced colorful drawings illustrating some of their dark memories, their search for normalcy and their wish for a bright future in a peaceful Syria.  Their colourful drawings were exhibited outside the concert hall.

Displaced by war children, hold on to hope

Like all the other children performing that day, Ansam and her family were forced to seek refuge from the violence in their hometown of Harasta in rural Damascus.

“I was playing on my swing on the balcony when I heard loud scary noises,” remembers Ansam as she describes the day they had to flee. “I ran to my mother and hugged her tight. She said we had to leave.”

Because of their visual impairment, displacement has been much harder for Ansam and her sisters.

“They had to memorise a new house to move around,” says Ansam’s mother.  “I’ve been to two different schools with them every single day over the past three years to help them interact with their peers and know their surroundings.”

Back in Harasta, the three girls attended a centre for visually impaired children where they were able to improve their skills. But persistent violence forced the centre to shut down and the girls, now in Grade 5, had to enroll in a regular school that wasn’t adapted to their needs.

“Ansam was struggling to learn and didn’t want to interact with other children,” explains her mother. “That’s why I was so happy when we discovered her talent for singing and wanted to support her to do something she loves,” she adds.

A little over a year ago, Ansam was referred to AWTAR by a family friend. Since then, she has been coming once a week to learn to play the keyboard and the oud– a traditional lute. Ansam also does voice training to help her improve her voice and breathing.

“My favorite time of the week is when I go to the centre. I meet my best friends Asal and Shahd; we hug and sing the entire time.”

Before we left Ansam’s new home, her mother had a message to other mothers of children living with a disability: “You will go through extremely difficult times,” she said, “but you can never lose hope and determination. If you support them all the way and never quit it will be worth it at the end. Ansam could not even say the word ‘mama’ before the age of four. To see her standing on that stage, singing beautifully was worth all the effort.”