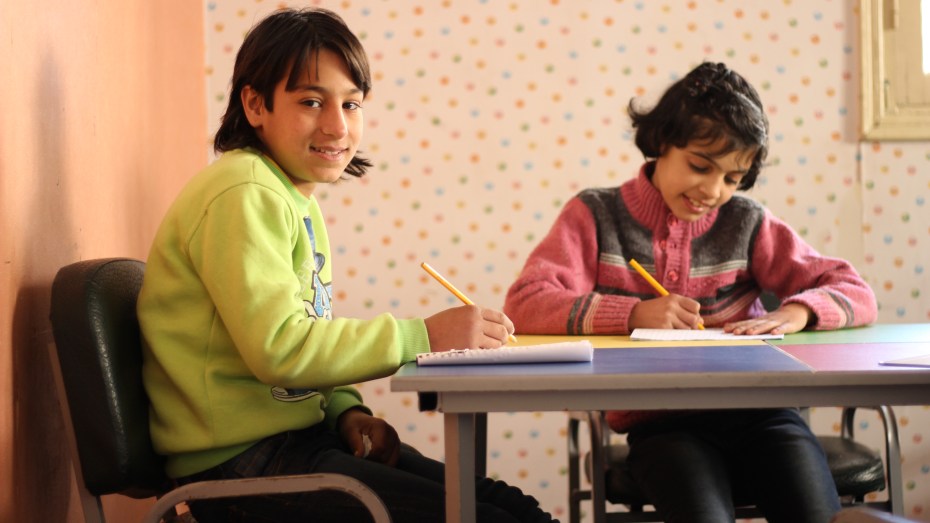 Aleppo, Syria, 20 March, 2017- Like in a fairytale, our story is set in a two-floor house with a welcoming green door, surrounded by a tiny garden of Jasmines and olive trees. But for the unique family inhabiting it, “un-fairy tales” is a more proper description of the journey that led them to this house.

As violence escalated in Aleppo over the past three years, the city’s main orphanage – The Islamic Charitable Home for Orphans was damaged. Children and staff were forced to move from one location to another, seeking a safe shelter.

By end of November 2016, as families fled and evacuated the eastern parts of the city, UNICEF identified more children who were unaccompanied –some of them too young to speak.

“It’s so sad to see children being separated from their loved ones while fleeing immediate danger amidst chaos and confusion,” says Ms. Hanaa Singer, UNICEF Representative in Syria.

There was an immediate need to create a safe haven for these children, while tracing efforts to reunite them with their families were on-going.    This is how the UNICEF-supported home came into existence, welcoming 74 orphaned and separated children.

“Our priority is to ensure that unaccompanied children have a safe place to stay and be cared for, while we trace their families to reunite them,” adds Singer.

Mohammad and his five siblings; Hanadi, Ibrahim, Doha, Zakariya, and nine-month old toddler Yamen are among the few children who arrived to the home.

Last month, as volunteers combed the neighbourhoods of eastern Aleppo in search for unaccompanied children, they found Mohammed and his siblings.  Arriving at a partially-destroyed building in a deserted area of Aleppo, the team met the six children.

With nowhere to go and no one to care for them, the six children had been living alone for almost two months in a single bedroom.

“My father was killed during the fighting, and our mother was detained when she went out to buy some food,” says Mohammed.

The children had no option but to survive on the small amounts of food and clean water they could afford by selling scraps of metal they found rummaging through the rubble. They would try to stay warm by burning pieces of wood. Despite his young age, Mohammad took on the responsibility of the “man of the house”, caring for his siblings, including Yamen. The toddler was found wrapped in a soiled blanket.

Volunteers accompanied the children to the UNICEF-supported home where they had warm showers, hot meals and clean clothes for the first time in weeks.

“When they arrived at the home, they were in the worst conditions imaginable,” says a staff member, who was among the first to receive the children.

“They were shocked, they hadn’t showered in so long. They were covered in ashes because of the wood they were burning to warm up. Their hair was full of lice and the little baby was crying uncontrollably,” he adds.

The siblings were placed under the care of the “Aunties” a nick name by the children for the 12 governesses at the orphanage they now call home. Their only wish was to not be separated from each other.

Two weeks ago, Mohammad and Hanadi were excited to return to school, while Ibrahim and Doha saw the inside of a classroom for the first time in their life when staff members at the home enrolled them in a nearby school.

At the shelter, they live and interact with other children in similar situations, like Nour, a two-year-old toddler who was rescued from the rubble by a family fleeing eastern Aleppo last December. Terrified, injured and confused, the little girl was transferred with the family to a shelter on the outskirts of Aleppo then moved to the orphanage while efforts are undertaken to find her family. The “Aunties” named her Nour –meaning light. No information has surfaced as to the whereabouts of her family.

The temporary home offers children a protective environment to restore normality into children’s abnormal lives. The children wake up at seven in the morning to have breakfast together before school. Every day after school, they receive remedial classes covering different subjects to help them catch up with their peers.

“We try to make their life as comfortable as possible,” says Mohammad, a staff member at the orphanage. “On weekends, we all go out to parks to play and have fun like one big family!”

Working with partners on the ground, UNICEF identified 324 unaccompanied and separated children in Aleppo. The children were referred to safe temporary homes while UNICEF and local NGO partners work on tracing parents, closest surviving relatives or extended family members. Having witnessed so many horrors in their few years of life, many of the children were traumatized, prompting UNICEF to include them in psychosocial support activities.

Luckily, there is always a glimpse of hope in the house with the welcoming green door.

In January this year,  and after four months of living at the temporary home, the six siblings were reunited with their uncle; the closest surviving relative after their parents were killed in fighting in east Aleppo. After months of searching, the referral unit at the home succeeded to track the uncle and ease the children’s pain.