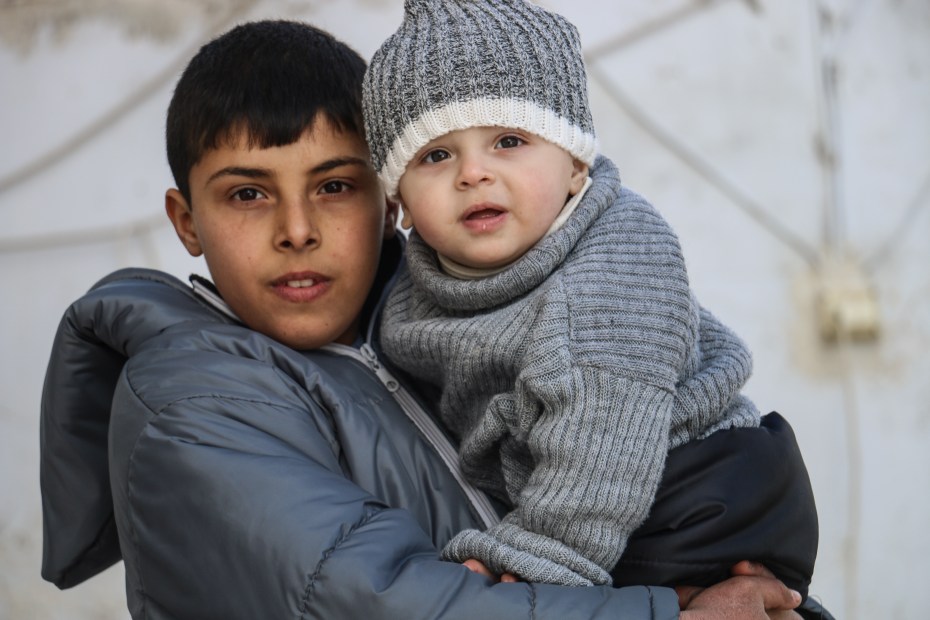 Abdulrahman, 12, carries his 9-month old brother Ma’en in Kafar Laha in northern rural Homs; an area that is hard-to-reach with humanitarian assistance. They both received a set of winter clothes during the last humanitarian convoy to the area in October last year.

For children and their families across Syria, winter used to bring joy. But after six years of conflict, childhood memories of getting cosy around the heater, playing in the snow and warm winter clothes, are all but forgotten.

7 February 2017, Damascus, Syria- Six years of war have changed how winter feels for children in Syria. With rising prices, inflation, displacement and 85 percent of the population living below the poverty line, winter only adds to the many hardships of families across the country.

“I couldn’t play with snow because I don’t have clothes that are thick enough. All my winter clothes were in our house that was destroyed by shelling,” says 10-year old Mustafa as he walks his little brother back to their family’s tent in a camp in Idlib, northern Syria. Almost 1,000 people from rural areas in Hama and Idlib have called this camp home, for years.

Two snowstorms have hit the region this winter, making life even harder for children and families living in camps with no protection from the cold.

In Quneitra, in southern Syria, 400 displaced families live in a makeshift camp. The tents- made of plastic sheets, some blocks and tin- are barely carry the heavy snowfall.

“Every winter we struggle with the tent’s roof falling on our heads because of the snow,” says Abu Nour who lives in the camp with his wife and eight children.  “Yesterday when the roof fell again, we stayed with our neighbours in their tent,” he added, showing the damage that melting snow caused to his family’s few belongings after the last snowstorm in late January.

Families have lost their sources of income and their lifesavings. They are forced to painfully prioritize their daily necessities.

“My two daughters fell ill all the time. I cannot afford to buy them clothes and pay for their health care all at once,” says Khadija, a widowed mother in Damascus.

“If it wasn’t for this, I wouldn’t be able to buy clothes for my daughters,” she added, referring to an e-voucher she received from UNICEF.

For the two million children trapped under siege and living in areas that are hard-to-reach with humanitarian assistance, winter doesn’t just make them cold, but also compromises their future.

“I used to go to school wearing old worn out clothes, sometimes even torn. I used to be very ashamed of going to school wearing them,” says 12 year-old Abdulrahman who lives with his family in Kafar Laha, one of the hard-to-reach areas in northern rural Homs, central Syria.

“My parents don’t have enough money to buy me new clothes and my father doesn’t work because there isn’t work for him. I help him plant some vegetables in our yard that we sell and eat from,” adds Abdulrahman.

On 24 October last year, UNICEF was part of an inter-agency humanitarian convoy to Abdulrahman’s town that delivered over 5,000 winter clothes kits for children. These kits provide a full set of winter clothes for children including a jacket, a woollen sweater, warm winter trousers, a thermal outfit, woollen hat, scarf, gloves, socks and a pair of winter boots.

“It is very nice to get new clothes and I wish that we get them more often because there are only very few clothes to buy and when they are available, they are very expensive,” says Abdulrahman.

“Now I can go to school without being ashamed and even if the classrooms don’t have heaters, you won’t care if you are wearing thick and woollen clothes and you’ll be able to study well,” he adds, happy to have one less challenge to his education as shelling continues to disturb his attendance.

To ease the financial burden on families, UNICEF rolled out an innovative e-voucher programme, allowing children to buy winter clothes. Families receive vouchers similar to ATM cards, and use them at a network of 31 stores in Syria to buy a full set of children’s clothes for winter.

UNICEF is also distributing winter kits, keeping 650,000 children warm this winter and allowing their families to use the saved money on other basic necessities.