By Yasmine Saker and Basma Ourfali

Since renewed fighting in the eastern part of Aleppo on 24 November, at least 40,000 people have been displaced within and from the area. Half of them are children.

Displaced families have been transported to the industrial district of Jibreen where they are temporarily housed in a large warehouse turned in to a shelter. Some have left the shelter to stay with relatives elsewhere. Their living conditions in the camp are very basic, cramped and freezing. As rain pours through leaky roofs and broken windows, families huddle together inside.

For the families who fled the fighting in Aleppo city, the arduous journey was full of chaos and horror.  Terrified and alone, many of the children arrived in shelters unaccompanied or separated from their families, with many suffering from injuries sustained as they fled to safety.

There was no time to gather belongings, no time to plan an escape. Adults helped push wheelchairs across rubble-strewn streets while others carried the elderly on their backs. Children gripped the arms of their younger siblings as they dashed under heavy fire from one building to the next. Every parent’s nightmare and every child’s fear was realized as terror and confusion scattered them away from each other.

Two weeks ago, one family fleeing the eastern part of Aleppo found a little girl, not much older than two, wandering alone amid the ruins. She was terrified and confused. On their way to the shelter, the girl kept screaming “Mama, Papa!” but her parents were nowhere to be found.  Social workers transferred her to an orphanage in the western part of Aleppo and shared her photo with the child emergency unit working on reuniting children with their parents in Jibreen – one of the shelters on the outskirts of Aleppo. It is still not known whether she is with her mother and father yet – or whether they are even alive. Her story is not uncommon. Eight year-old Amar was fleeing with her nine siblings, father and grandfather through one of the corridors between the east and west of the city when she hurt her leg and became separated from her family. Amar then continued the journey to Jibreen with other families.

Once she arrived, she was rushed to hospital where she met Fatima, a young, injured woman who had lost her entire family in shelling back in eastern Aleppo.  “When I met Amar I felt that we had so much in common,” said Fatima. “I promised her to take good care of her until she found her parents, just like a sister.”

Both Amar and Fatima have now returned to the shelter in Jibreen together, as social workers try to reunite them with surviving family members.

“A horrible reality of war is that children are often separated from their parents and caregivers, most often in the chaos and confusion of fleeing immediate danger.” Said Ms. Hanaa Singer, UNICEF Representative in Syria.  “Our priority is to find them a place of safety and care while we can trace their families,” she added.

Fatima, another injured woman in Jibreen, was widowed at the age of twenty when her husband was killed in shelling only months after their marriage. 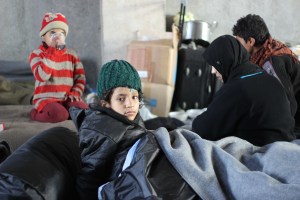 “I was injured the night before we left our house, I still have shrapnel in my leg” Fatima said, as she recounted how she and her parents left eastern Aleppo. “My mother wrapped some clothes around my wound and when the neighbors knocked at our door at dawn, we set off immediately. I was bleeding and couldn’t walk, and my elderly parents were running. I grabbed my father’s hand, I was so afraid to lose them. Pain was running through my body and I fell. For a few minutes, people were stomping on me. I thought I would never survive, but luckily someone pulled me up. We were walking in silence and fear, we did not know what was waiting for us at the end. We then heard a loud noise and children started screaming. It turned out that a family of five who was walking behind stepped on a landmine, they all died immediately.”

When Fatima arrived at Jibreen, she was immediately taken to a hospital for treatment.

UNICEF teams in Aleppo are working with partners to provide life-saving assistance for all children arriving in Jibreen, including those separated from their families. UNICEF’s response includes emergency trucking of more than six million litres of water per day, the installation of water tanks and washrooms and distribution of vital hygiene supplies. UNICEF is also providing essential healthcare including primary care, vaccinations, and door-to-door screening and treatment of malnutrition.

Tens of thousands of children, most of them traumatized by the horrors of the conflict, have received psychosocial support to help them cope with their suffering and to give them a chance to simply be children again.

In addition to supplying much needed winter clothes and blankets to help families cope with dropping temperatures, UNICEF is setting up remedial education classes and providing prefabricated classrooms in shelters, to allow children to carry on with their education.