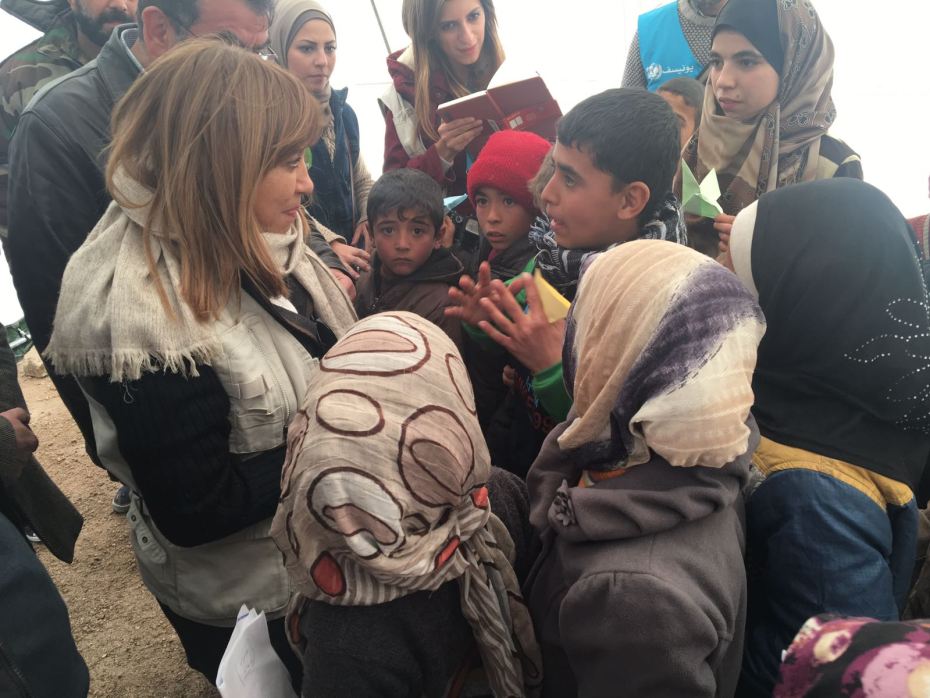 ©UNICEF/Syria/2016/Al-Issa
Hanaa Singer, UNICEF Representative to the Syrian Arab Republic talks with children at a shelter in Jibreen where some 8,000 people displaced by fighting in east Aleppo are housed.

ALEPPO/DAMASCUS, 07 December 2016 – “I have just travelled back from Aleppo where the situation continues to plummet to even greater lows.

“When I was there nearly 100 mortars fell on west Aleppo in a couple of days. While at the same time, only a few hundred metres away we witnessed the unrelenting bombardment of the eastern side of the city.

“Explosions lit up the night sky and the sounds of war reverberated across the city.

“My colleagues told me that they hid in bathrooms and basements as the attacks continued. There was little sleep that night. The very same staff came to work in the morning with the same energy, as if it was just an ordinary night.

“But sometimes they never go home. A volunteer working at a UNICEF-supported child friendly space was killed yesterday in west Aleppo. He was simply walking the children to their shelter after morning activities when he was hit by a bullet. Ahmed Tawfik was 24 and a third year economics student.

“Even by Syrian standards, the recent bombardment and shelling have been the most intense in Aleppo.

“Some 31,500 people have been displaced from east Aleppo in just 10-days. According to some of the latest estimates at least 50% of displaced persons seem to be children.

“I travelled to one of the shelters for displaced persons in Jibreen on the outskirts of the city. It’s a large warehouse where families huddled together on mattresses on the floor. The damp and piercing cold made the conditions even tougher.

“To the soundtrack of the deafening noise of explosions and firing of heavy weapons, the children, who were attending psychosocial support activities, shared some stories. They shared stories of how they cowered for days and weeks in dark and damp basements in fear of the shelling in besieged east Aleppo. They shared their dark memories of destruction, and the smell of dead bodies under the rubble.

“The shelling and explosions were unrelenting and deafening. The children laughed at me every time I winced as the terrible sounds of war filled the air – not real laughter but an abnormal reaction born out of a complete loss of normalcy.

“They were also afraid. And the greatest fear for all of them was the sound of planes.

“A seven year old girl was so excited to see bread during the food distribution that she screamed out ‘Look Mum, this is real bread’.

“Then I visited Hanano, a neighbourhood in east Aleppo that was retaken by government forces on 27 November. Some people are returning home and others have been displaced here.

“The destruction was massive. Unexploded ordnance scattered everywhere. Apartments were gutted, hospitals nearly destroyed and schools completely damaged except for two that could be rehabilitated.

“But surprisingly people were still going back. To try and rebuild their shattered houses and lives.  For you see… people just want to go home.

“Our incredibly brave and committed 19 Syrian and international staff and tens of volunteers and hundreds of partners based in the city are risking their lives every day to support children and families in Aleppo.

“Our staff work from an office that was directly hit by a mortar, just one month ago. They risk their lives every time they leave home to come to work, or to visit a programme or a shelter.

“What drives them to do this, as my colleague Esraa, a health officer said, ‘To work in Aleppo is an act of love and belief’. For Aleppians are truly in love with their ‘what used to be’ majestic city.

“But there is no safe place left in Aleppo. Even going to school can be a matter of life or death.

“And I will be forever haunted by the images of the bodies of the two beautiful girls, Hanadi and Lamar, who left for school one morning with pink ribbons in their hair. They never made it. Shrapnel from a mortar hit them on the way and they were killed. Hanadi’s hand still grasped the remains of a chocolate bar.

“This year there have been 84 attacks on schools in Syria with at least 69 children losing their lives and many others injured while being at school.

“In response to the latest displacement in Aleppo, UNICEF staff are working around the clock to make life a little more bearable for children.

“Winter clothes are being distributed, water is being trucked to shelters and areas where people are returning, like Hanano.

“We are providing fuel, repairs and maintenance of Aleppo’s water network so 1.2 million people have access to safe water.

“Nearly 7,000 children and mothers have been reached with critical routine immunizations.

“Mobile health clinics have screened over 1,600 children for malnutrition and distributed nutritional supplements.

“Mine risk education and psychosocial support services are reaching some 6,000 children.

“These simple immediate interventions can save lives.

“Although the world’s attention is on Aleppo, sadly the scale of suffering is widespread. East Aleppo is one of 16 besieged areas, where we estimate that nearly half a million children remain trapped amid worsening conditions.

“Besiegement has been used by all sides. Where armed forces surround an area and try to starve the other into submission, whilst restricting the movement of persons, including the sick and wounded.

“When I last went with our team to the town I was shocked by what I heard. People surviving on leaves and grass.

“I was taken to what was called the “health centre”. It was, in fact, one room in the basement of a house. Ushered into the semi-darkness, I was met by the sight of limp bodies lying on blue blankets on the floor.

“The doctor, the only paediatrician in town, took me to the one and only bed.

“It had what appeared to be two bundles.  As I looked closer in the darkness I was startled. It was actually two, skeleton like young men. They were drifting in and out of consciousness.

“Ali 16 was hovering between death and life.

“Rajia, my health colleague tried to save his life and resuscitate him. She pumped his chest shouting 123,123 …. But Ali drifted away in-front of our eyes.

“As we closed his eyes, I heard the whimpering of a cry. I then saw his family huddled in the corner. They were too weak to even mourn.

“With the health workers and volunteers present we conducted training on how to use the therapeutic food and treatments we had brought in.

“Malnutrition rates were improving when we entered with regular aid convoys. Sadly regular access to besieged areas has become rare.

“The situation is deteriorating. Children are dying because they can’t be evacuated just one hundred metres away to be treated.

“The complexities of aid in Syria brings little relief to the nearly six million children in need of humanitarian assistance in the country.

“But children do what they can to survive and live a normal childhood.

“In my daily work I have always been in awe of the extraordinary stories of children’s determination and resilience.

“Like the 12,000 children who risked their lives to cross active conflict lines, to sit for their national final exams.

“They came from hard to reach areas, travelled for days, through checkpoints, under the fire – full of hope and determination for a better future.

“These courageous youngsters are the teachers, nurses, doctors, architects, builders, musicians, scientists and technicians of tomorrow that will build the future Syria.

“The children of Syria are not giving up and nor can we. UNICEF is committed to doing what we can to support them and to provide opportunities wherever we can.

“For out of school children, self-learning programmes and catch up classes helped to revive their education.

“Tens of thousands of children received psychosocial support to help them cope with the horrors around them.

“Routine immunization coverage has been boosted from a national average of 50% to 75%. Polio vaccinations stopped the deadly disease – with no new cases for almost three years.

“We can make a difference but it’s never enough. Let’s be clear, as long as the violence continues, children in Syria will suffer.

“But we are determined to do what we can to reach out to children. It’s why we have more than 200 staff who risk their lives every day across the country to support Syria’s children.

“Syrian families, and Syrian children, have one major desire: to return to their homes, to live in peace, and contribute to the reconstruction of their beautiful country.  We need to provide them with the opportunity to do just that.