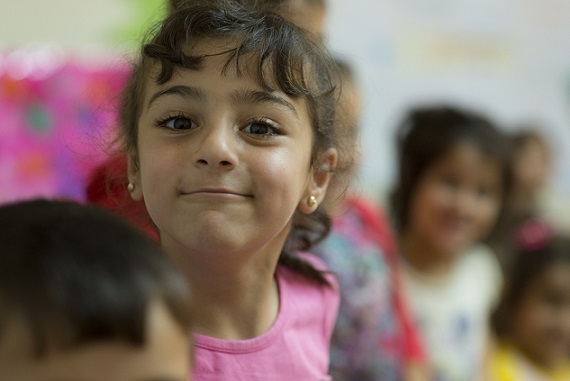 BRUSSELS/AMMAN, 6 December 2016 – An exhibition by UNICEF and the European Commission opened in Brussels today as a visual display of the human cost of the Syrian conflict and the powerful will to persevere by children, young people and families who have fled unspeakable horror.

The exhibition, titled “Standing Strong: Human Faces of the Syrian Crisis” presents some 24 photos by war photographer Sebastian Rich who travelled to Jordan, Lebanon and Turkey in October to meet with Syrian refugee children and families and give them a voice through the images.

The photos are on display at the Berlaymont Building in Brussels from 6 to 15 December.

The exhibition will also feature drawings by Syrian refugee children from the three countries, giving insight into dreams, fears, thoughts and an unfiltered view of what war looks like through the eyes of a child. The drawings reflect aspirations for peace along with memories of the children’s homes, gardens, toys, friends and schools they left behind.

The display is a tribute to the stories and struggles of more than 2.5 million children and their families who have fled the brutal conflict in Syria.

“Each of these pictures tells a story of human suffering,” said Johannes Hahn, the EU-Commissioner for European Neighbourhood Policy and Enlargement Negotiations, who opened the exhibition. “We have a duty to turn the despair of those affected by the war in Syria into hope for a more stable and secure future. To that end, the EU has set up its Trust Fund in response to the Syrian Crisis to support the people and regions most affected by the conflict in Syria. Through the partnership between the EU Trust Fund and UNICEF for Syria’s children we are able to address the situation of children and youth in Syria and in the host countries quickly and with flexibility. Our main goal is to help prevent ‘a lost generation’ with all its negative consequences for the whole region.”

The exhibition is made possible through the continuous partnership between the EU and UNICEF and is funded by the EU Regional Trust Fund in Response to the Syrian Crisis. Through the work of UNICEF and partners, and with generous funding from the EU Trust Fund, hundreds of thousands of children and youth from Syria, now refugees in Jordan, Lebanon and Turkey, along with vulnerable host communities, will have access to learning, education, protection from harm and psycho-social support.

“Children and youth who have become refugees or displaced from war and violence are not the problem, but rather a key part of the solution,” said Geert Cappelaere, UNICEF’s Regional Director for the Middle East and North Africa. “They can be the future peacemakers as well as lawyers, doctors, engineers, and artists needed to rebuild their communities and country. Investing in them and in their education is the best investment for the region and for all of us. History will judge us harshly if we fail them.”

The needs of children and youth are immense and growing. Today, one in three Syrian children have grown up knowing only crisis and conflict, and a generation of young people have come of age during times of war. More than 2.4 million are out of school inside Syria and in neighbouring countries and at added risk of abuse, violence, child labour and early marriage.

These are real-life issues as told by the children and families captured in the photographs and through the drawings. Images include the cupped hands of a little girl holding a tiny drawing she made of a bleeding friend; a young girl poring over a book and eager to learn; and a set of brothers from Homs who are now members of a youth theatre group that helps spread positive messages to their communities – from ending violence to dealing with the pressures of life as a refugee.

So far, the EU Trust Fund has provided €102.5 million in support of UNICEF’s work to support refugees and vulnerable host communities in Jordan, Lebanon and Turkey.

About the EU Support:

The European Union is the leading donor in the international response to the Syrian crisis with an overall total of €9 billion from the EU budget and Member States collectively allocated in humanitarian and development assistance since the start of the conflict in 2011. The European Commission’s support in response to the Syrian crisis has now exceeded €3.4 billion, including both immediate humanitarian assistance, and non-humanitarian aid.