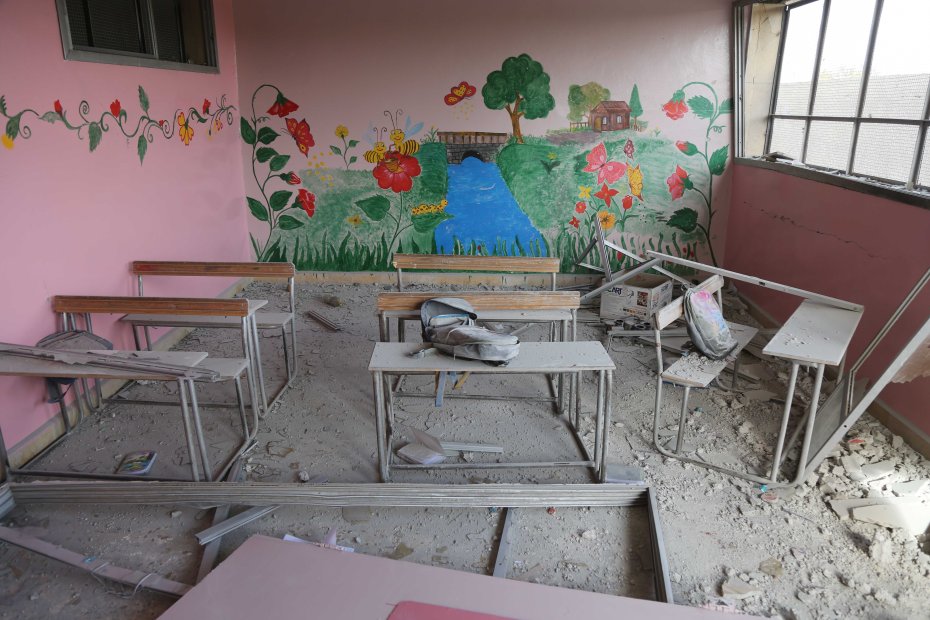 ©UNICEF/2016/Syria/Rural Damascus/Al Shami
Signs of destruction in al-Qarma school in rural Damascus after the primary school was attacked on 20 November. At least one 10-year-old child died in the attacks, and 15 other children were injured, many with critically.

AMMAN, 21 November 2016 – “It has been a horrific week for Syria’s children – living and dying under the relentless bombardment of schools, homes and hospitals.

Hospitals in eastern Aleppo and Idlib were targeted while attacks on schools in Aleppo and Ghouta left nine children dead.

We saw footage of children being treated for asphyxiation in eastern Aleppo. Moments later, al-Bayan hospital is shelled, and terrified mothers carry their children to a basement while sick infants are taken out of incubators to be rushed to safety.

There are no more working hospitals in eastern Aleppo, where more than 100,000 children are trapped under siege and heavy bombardment with dwindling access to food and medicine.

They need these hospitals to stay alive.

In western Aleppo two schools were attacked, leaving eight children dead and many more injured. In one school, a fourth grade class was practicing a dance routine when a mortar fell in the school yard.

At al-Qarma primary school in east Ghouta near Damascus, a girl was reportedly killed and at least 15 injured when the building took a direct hit. The 10-year-olds were in a mathematics lesson.

In Idlib, an additional two schools were hit with three children injured.

This year, the UN has documented 84 attacks on schools across Syria, with at least 69 children losing their lives and many others injured.

Parties to the conflict must stop bombing schools, hospitals and other civilian infrastructure – actions which are against international law and may amount to war crimes.

There are few words left to express our outrage. We wonder if all those who are responsible have words left to justify these attacks on children.”