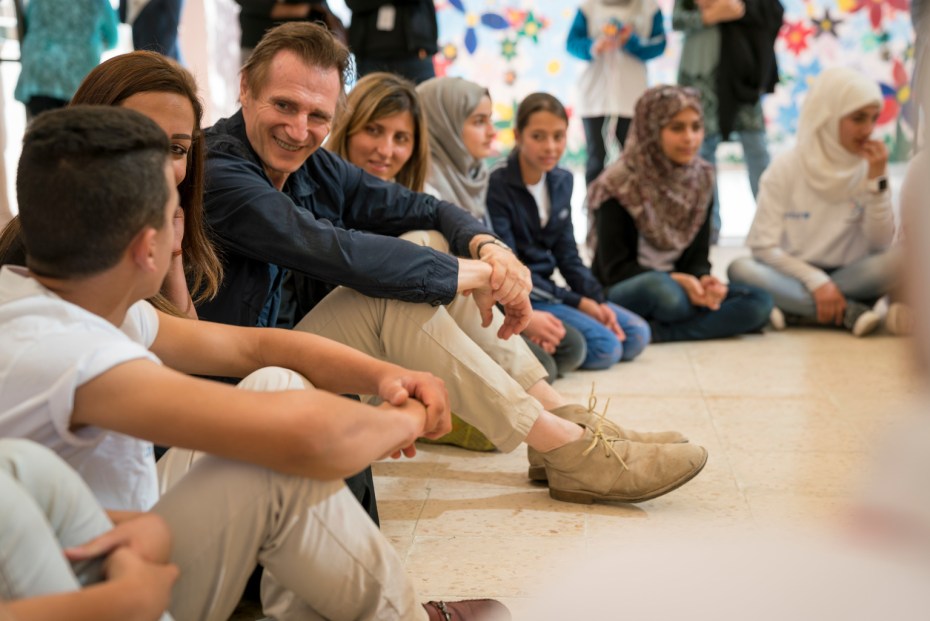 NEW YORK/AMMAN, Jordan, 10 Nov 2016 – UNICEF Goodwill Ambassador Liam Neeson wrapped up a two-day visit to Jordan this week, along with his eldest son Micheal, where he met with Syrian children, young people and their families whose lives have been greatly affected by the conflict – now close to its sixth year.
“Every person has a story of loss and of witnessing horrific violence that no one – least of all a child – should ever have to see,” said Neeson after visiting the Za’atari refugee camp near the Syrian border on Monday. “I truly admire the strength and spark of the children I met, the girls in particular. They want to be doctors, lawyers, police officers and engineers so that when they can go back to Syria they can rebuild their country. It is incredibly inspiring to see how education so empowers them. I will never forget them.”

The award winning actor visited Za’atari refugee camp, meeting girls and boys at a UNICEF-supported school and a Makani (My space in Arabic) centre that provides learning and psychosocial support services to children and youth, and most importantly a sense of normalcy to lives that are far from normal. He also visited a Syrian family in their two-room shelter that is home to a family of five. Like so many other families who have come to Jordan or neighboring countries, the little savings they had are gone, and life is becoming increasingly difficult.

“It was really great to have Liam Neeson meet vulnerable children and youth affected by the Syrian refugee crisis in Jordan,” said the UNICEF Representative, Robert Jenkins.  “We are grateful for his commitment in helping us amplify the voices of millions of Syrian children and youth, who, despite the protracted conflict, remain incredibly resilient and hopeful.”

With a population of around 80,000, Za’atari is the largest Syrian refugee camp in the world a short drive from the Syrian border. UNICEF and partners are providing life-saving support through vaccinations, medicines, clean water, sanitation, and opportunities for children and youth to get an education and learn skills for their future.

On the second day, Neeson met students and teachers at a ‘double shifted’ public school in Amman to learn about a national campaign aimed at reducing violence against children. Many schools in Jordan operate in two shifts to accommodate Syrian children in the public education system. Later in the morning, he played football with Jordanian and Syrian children involved in a sports for peace programme managed by UNICEF’s partner, Generations for Peace.

Since the conflict in Syria erupted more than five years ago, over 8.5 million children have been severely affected.  The future for these children inside Syria and those living as refugees in neighboring countries hangs in the balance as violence, the collapse of health and education services, severe psychological distress and the worsening economic impact on families can have a devastating effect on a whole generation.

In host countries throughout the region, 2.4 million Syrian children are now living as refugees.   Host communities are often overwhelmed and there is limited access to clean water, nutrition or learning opportunities.

UNICEF has been calling for an end to the cycle of violence in Syria along with further steps to keep children impacted by the conflict safe and to provide them with inner healing through psychological care along with better access to education.