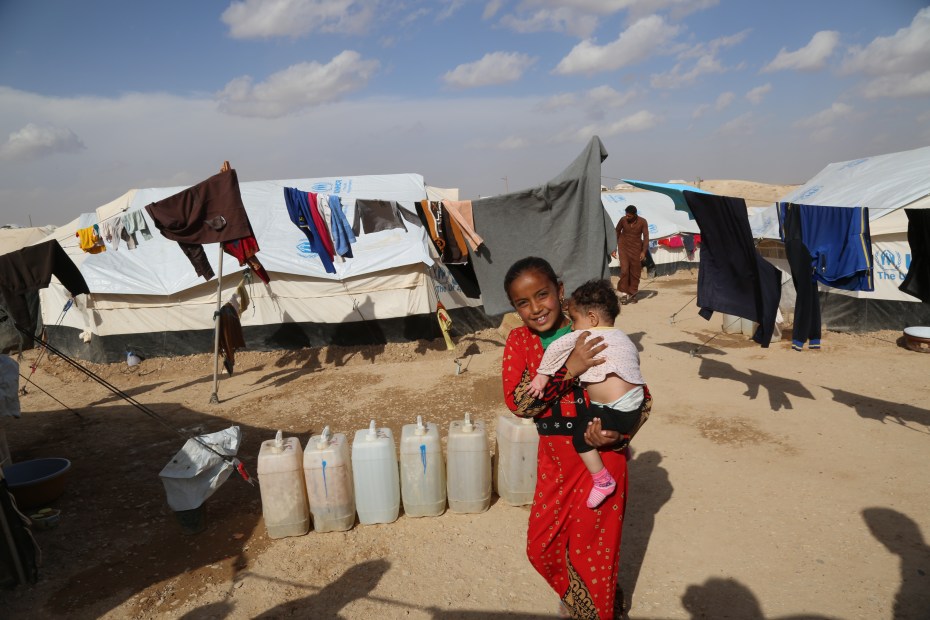 ©UNICEF/Syria 2016/ Delil Souliman 7 year-old Manar carries her sibling in the Al-hol camp where she and her family currently live after they fled their home in Ba’ag ditrict in Iraq and arrived in Al- Hol camp one month ago. UNICEF started its emergency water response, trucking 75,000 liters of water per day for displaced children and their families in the Al-hol camp. Next week, UNICEF will commence distributing 5,000 family hygiene kits, 3, 000 baby hygiene kits and 10,000 jerry cans to refugee families. Plans are also underway to rehabilitate existing Water, Hygiene and Sanitation facilities in the camp.

Children in and around the city of Mosul in Iraq have endured extreme suffering for more than two years.  Many of them were forcibly displaced, trapped between fighting lines, or even caught in the cross-fire.

“We escaped the violence to protect our ten children.” says Ibtisam.

Ibtisam is one of the 927 Iraqi refugees who recently arrived to Al Hol camp in the north-eastern town in Syria’s Hasakeh Governorate, close to the Iraq-Syria border.  Since earlier 2016, around 4,600 Iraqis fled to the camp seeking refuge.

“We used up all of our savings, and we sold everything to escape the fighting,” adds Ibtisam with a grin.

The family first moved to Sinjar Mountain in northern Iraq, where they lived for two years.  Escaping the hails of bullets for the second time, they sought refuge in Al Hol camp.

The arduous journey to Al Hol camp was traumatizing for Ibtisam and her children, adding to the multiple sufferings they had endured.

“The trip was torturous, we escaped cross fire,” recalls Ibtisam.  “We had no food, no water and the children were exhausted.” 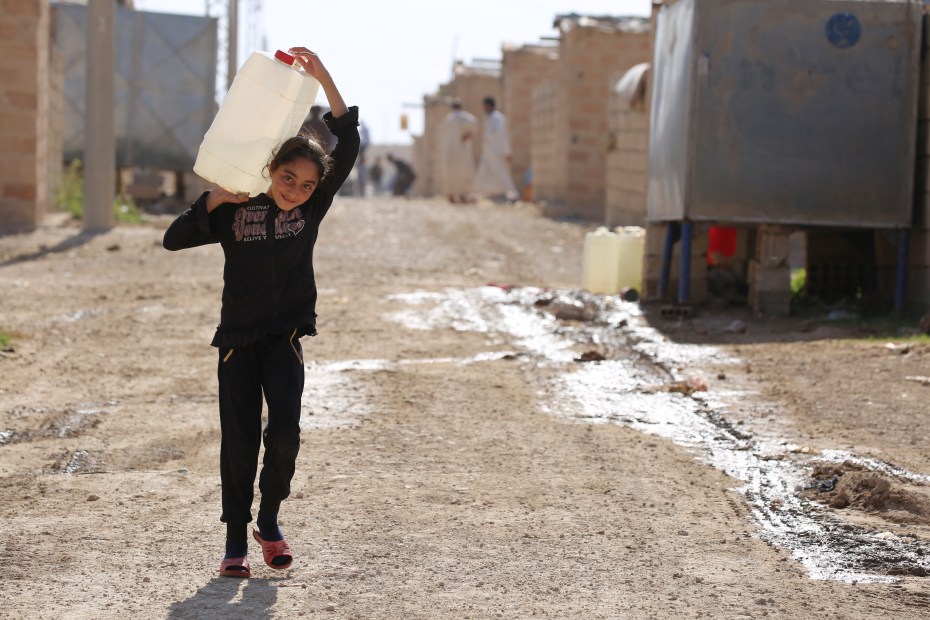 ©UNICEF/Syria 2016/ Delil Souliman 10-year old Xezlan Heddo carries a jerry can after she filled it with water from a UNICEF-supported water truck in the Al-hol camp, currently hosting more than 4,600 Iraqi refugees. Xezlan and her family fled the violence in the village of Om Diban in Iraq five months ago seeking refuge in Al- Hole camp in north eastern Syria, close to the border with Iraq.

Many of these families have suffered brutal situations under extremist rule, often without access to basic services, including medical care.

Emergencies are stressful for everyone. But they can be downright horrifying for a mother who cannot secure medical care for her child. “I need medical care for my son,” says Ibtisam pointing to large mass on her child’s scalp.

Most school-aged children who arrived in Al-Hol camp lost at least two years of education, or have been separated from family members.

“I want to see my brothers, I have not seen them for two years,” weeps Hamzeh, a 13-year old boy as he shares the harrowing ordeals of enduring dire conditions in Mosul.  Hamzeh is one of the many children who has not seen family members for two years. 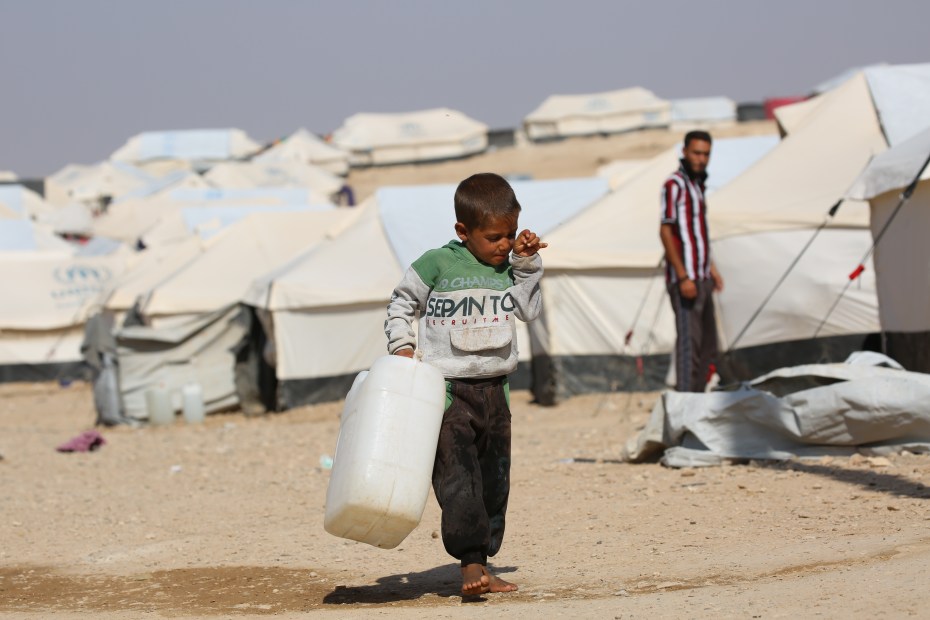 ©UNICEF/Syria 2016/ Delil Souliman 5 year-old Thamer walks carrying an empty water jerry in the Al-hol camp in north eastern Syria, hosting over 4,600 Iraqi refugees. Like most children at Al-hol camp, little Thamer bears the brunt of carrying water for his family. UNICEF started its emergency water response, trucking 75,000 liters of water per day for displaced children and their families in the Al-hol camp. Next week, UNICEF will commence distributing 5,000 family hygiene kits, 3, 000 baby hygiene kits and 10,000 jerry cans to refugee families. Plans are also underway to rehabilitate existing Water, Hygiene and Sanitation facilities in the camp.

The displaced Iraqi families in Al Hol camp live in tents, with little insulation from the heat or cold weather.  They struggle to survive on basic commodities provided by humanitarian agencies.

“Every child has endured massive suffering in trying to escape the violence“ says Ershad Karim, Chief of UNICEF Field Office in Qamishli.  “Uprooted, some of them several times, they face another bitter winter season under harsh conditions.”

In a nearby tent, 30-year old Rahaf is building a fire to prepare tea for her six children.  “We are trying to survive in difficult conditions,” she says.  “Life is becoming unbearable.”

Rahaf’s family also fled from Mosul seeking refuge in Al Hol camp. Desperate to make ends meet, Rahaf and her family sold all their personal belongings.  They are now among the thousands of families in the camp relying on humanitarian assistance they receive from aid agencies.

With other UN agencies, UNICEF is working to provide children and their families with life-saving water, food, and shelter.

“We are working hard to bring back a sense of normalcy to children who are going through  horrific experiences,” says Karim.