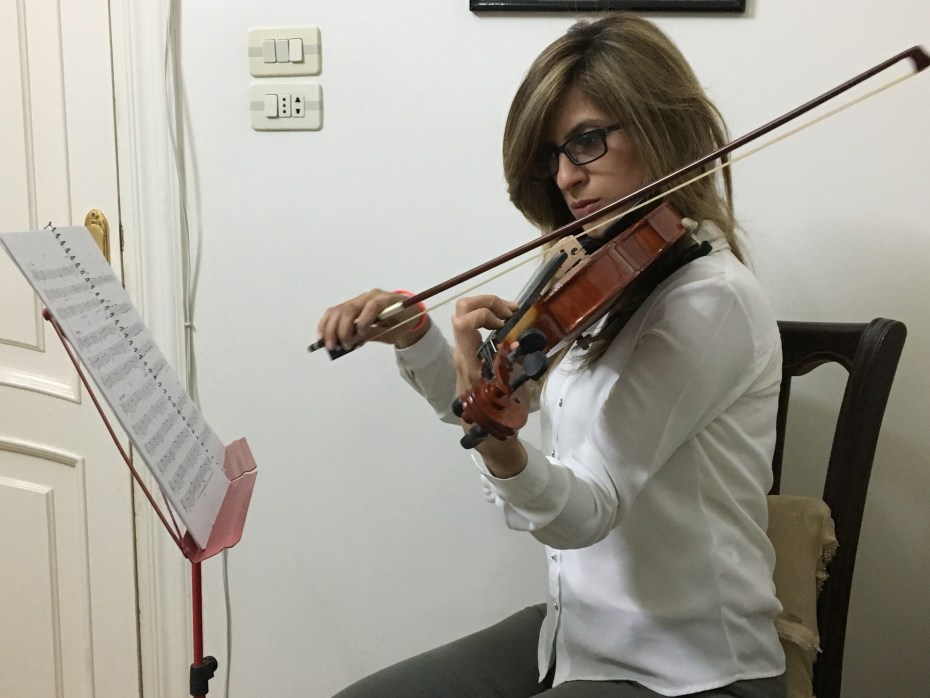 Aleppo, Syria, 23 October 2016
Aleppo is my home. I grew up and live in one of its neighborhoods – just 500 metres away from the frontlines.

And despite the ongoing war that rages around us, I had been spared the worst.
As a former English teacher, I always enjoyed listening to schoolchildren’s stories. When I joined UNICEF in Aleppo in 2015, I was privileged to meet children whom I wouldn’t normally encounter in everyday life.  Many were delighted when I listened to their stories of how their lives have changed and how they are coping with the reality of this barbaric war.

Living in Aleppo has become extremely challenging.  At the beginning, adapting to the current situation was tough on all Aleppians. Yet, over time we have earned how to cope.

Before the war, we had electricity and water.  Now, most of the time, we rely on long-burning candles because we only get a few hours of electricity a day, or sometimes not at all.

It is the same with water. Before the war, we weren’t careful with water and would waste it. Now we appreciate every drop. Each family has a tank. When we run out, we find alternative solutions. When you enter an Aleppian kitchen, you will find every bottle, every bowl, every pot, filled with water.

Movement outside home is perilous due to the constant shelling. When once I hung out with friends – laughing, chatting and swapping stories – now I stay indoors. The simple act of seeing friends is close to impossible.

Most of the time, we don’t know what tomorrow will bring – whether we will make it or not. I recall during Ramadan last year, as we were ready to break our fast, intense shelling started. It was dark, and we were bewildered – not knowing whether to flee or not. The only question running through my mind was: will we survive the day?

Eid, a feast marking the end of the fast of Ramadan, takes place in the middle of the summer. During such festivities, children usually wear new clothes, receive gifts, play joyfully and visit their families. Yet, children of Aleppo were queuing in long lines under the scorching sun, waiting to collect water for their families.

And this year, children in Aleppo had only a few days of calm during Eid before the fighting started again. It has been the most terrible time for children with so many killed and injured. There is no place safe for children in Aleppo. Bombs don’t discriminate when it comes to allocating death. It is heartbreaking to see children displaced again and again, families living on the streets, in mosques, schools or even in broken buses.

In such abnormal conditions, children somehow finds ways to cope with fear; perhaps because they don’t think about the future in the same way as their parents. It is wonderous how they adapt.
Attending school in Aleppo is not an easy task for children. It can be deadly.  Last week, I was confronted by the full horror of this war on children. It started like a normal working day.  At around 8:00 a.m. my UNICEF colleagues heard of a mortar attack close to the Hatem Attai primary school. As we hurried to Razi Hospital – one of the two surviving free hospitals in Aleppo, we feared the worst.

Nothing prepares you for seeing a hospital in a war zone. The scene that greets you is quite literally carnage.

I saw people weeping the loss of their loved ones. I saw injured people covered with blood.

The head doctor informed us that two children were dead from the school attack and two others were in the intensive care unit.
As we entered the ICU, a child’s heart stopped beating. Doctors and nurses administered electric shocks in a bid to return life back to the small helpless body in front of us.

I was standing there in the corner of the room, my camera in my hand and I was frozen. The child has gone. I had to flee the room, only to see the child’s father waiting to hear news of his offspring.

I will never forget the look in his eyes – a mixture of hope and fear. I rushed away. I simply couldn’t stand to look into his eyes when he heard about his loss.

We then moved downstairs to see the most difficult scene in my life. The two dead children were sleeping calmly on a hospital cot. A pink clip was still hanging on the well-brushed hair of 11 year old Lamar. The two little girls still looked as if they were on their way to school. I hope that the end came quickly – that they didn’t have time to realize they would never reach the school gates.

I will never forget them.

In Aleppo, we witnessed kidnappings, clashes and bombardments. We used to calm ourselves by saying: “This year it will end”. But now, we no longer say it, we simply adapt to the situation.
Despite the sad realities on the ground, we try to maintain some semblance of normal daily life. We continue to enjoy weddings and graduations, and even some small businesses are thriving. I personally opted to take violin lessons, and I know many other people who are learning to play musical instruments. We have learned to appreciate simple things in life that are usually taken for granted. Every moment is lived to the fullest.

The positive side of this war is that most people in Aleppo enjoy stronger relationships with their neighbours and community. Now, we spend plenty of time together, talking, listening to music and even knitting. We have also started to read more – to the point that I made an oath to myself that I will only read positive things. There is no point reading about the tragedies when you only have to look outside to see the appalling consequences of this war.