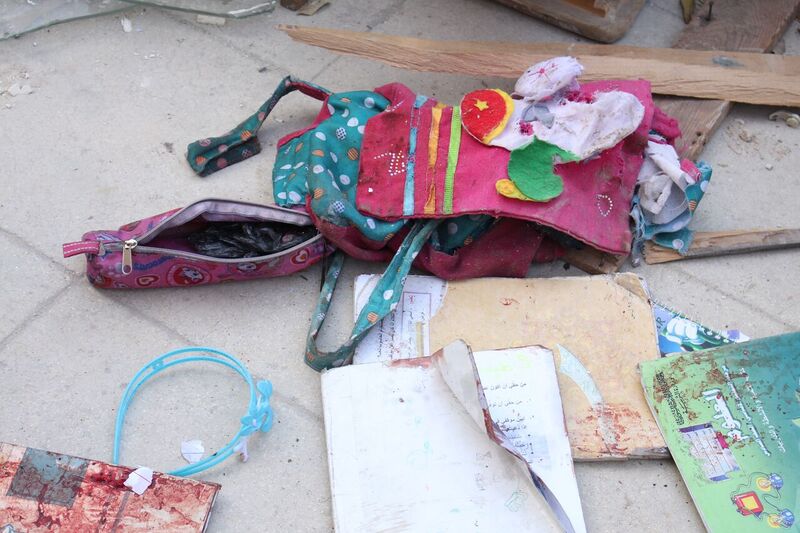 Aleppo, Syria, 14 October 2016 – The back pack of 9-year old Zaina, including some of her stationery, in addition to the science textbook of her 11-year old sister Lamar who was in sixth grade. Zaina and Lama; and Ismail (5) and his older sister Hanadi (9) were killed by a mortar attack on their way to Hatem Al Ta’i primary school on Thursday morning. This attack comes only two days after another mortar attack that hit That al-Netaqeen primary school in Daraa’ killing another five school children while attending school. Photo credit: UNICEF-Syria/2016/Basma Ourfali

For 14 year-old Jaffar, going back to school will never be the same.

Jaffar lost his older sister and mentor Aya during last week’s attack on That al-Netaqeen primary school in Daraa’.

The attack on the school was one of two incidents within a week that ended the lives of nine students who were on their way to school or playing in the schoolyard. The two attacks – in Daraa’ and Aleppo – were only two days apart. They left behind mourning parents and families and hundreds of grieving and traumatised children.

Yet while shelling shatter the morning roll call and leave craters in playgrounds, students remain more committed than ever to continue their learning.

“I am determined to go back to That al-Netaqeen primary school’” says Jaffar with a trembling voice.  “I owe it to my sister Aya, who told me before she was killed that ninth grade is easy, as long as you continue to study.”

Jaffar is one of the millions of children in Syria who are bearing the brunt of the gruesome violence.

Parents are overwhelmed, and feel powerless to protect their children from the inhumanity of war.

“I rushed like crazy out of class, and saw my son lying on the floor, his tiny body covered with blood, his leg and arm severed,’ says Samah, a school teacher at That al-Netaqeen primary school.  “I realised that I lost my son forever, and all I can do was hold him in my arms, and rush him to the nearest hospital.”

As a mother and a teacher, Samah was devastated by her loss, yet courageous enough to go back to the school and help rescue other students. But she has been left shocked, almost rendered mute by her loss.

“We can no longer protect our children,” she says.

In Aleppo, what seemed to be a relatively calm Thursday turned out to be another day drenched in blood. Only a few minutes after Rima and Zahraa bid their four children goodbye to go to Hatem al Taai primary school, a mortar attack hit the area killing all four children.

The intensity of this tragic incident on Rima and Zahraa and their families is unbearable.

Both primary schools – That al- Netaqeen and Hatem al Taai – are supported by UNICEF through the back-to-learning campaign launched at the beginning of the school year in September. The campaign aims to get all children back in school, providing them with stationary and books, recreational activities and community outreach initiatives.

There is no safe place in Syria, yet determined children are constantly risking their lives to go to school. Those who survive are not spared from the brutality of war. They witness dreadful acts of violence that no child should ever see, leaving them permanently scarred.

Investing in the children of Syria is now more critical than ever. “We cannot let millions of children like Jaffar and Raghad down. We owe it to each and every child in Syria to protect them from the daily and harsh realities of war,’” says Hanaa Singer, Representative UNICEF, Syria.

Despite the brutalities that children like Raghad are witnessing, their determination and passion for life is remarkable. “I want to grow up to become a pediatrician to help the injured children,” adds Raghad.

Parents’ perseverance is unimaginable, reflecting and reinforcing their children’s determination and passion for life. Like most Syrian mothers, despite her loss, Samah dreams of a better future for her children.

“All I can say is that these children deserve a better life, and as a mother and a teacher, I must work hard to secure it for them,” says Samah with confidence.