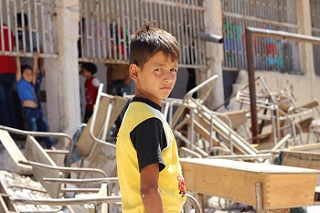 © UNICEF/UN029871/Al-Issa
A boy from the al-Hamadaniyah neighbourhood in Aleppo, Syria.

NEW YORK, 28 September 2016 – At least 96 children have been killed and 223 have been injured in Eastern Aleppo since Friday, UNICEF said.

“The children of Aleppo are trapped in a living nightmare,” said UNICEF Deputy Executive Director Justin Forsyth. “There are no words left to describe the suffering they are experiencing.”

The health system in Eastern Aleppo is crumbling with some 30 doctors left, hardly any equipment or emergency medicine to treat the injured, and an ever increasing number of trauma cases.

A doctor on the ground told UNICEF that children with low chances of survival are too often left to die due to limited capacity and supplies.

“Nothing can justify such assaults on children and such total disregard for human life. The suffering – and the shock among children – is definitely the worst we have seen,” said Forsyth.

About UNICEF
UNICEF promotes the rights and wellbeing of every child, in everything we do. Together with our partners, we work in 190 countries and territories to translate that commitment into practical action, focusing special effort on reaching the most vulnerable and excluded children, to the benefit of all children, everywhere. For more information about UNICEF and its work visit: www.unicef.org