Homs, 31st of August 2016 – When Dima woke up early to prepare for her first participation in an inter-agency convoy on the morning of July 28, she had no idea what to expect. The convoy was headed to al-Rastan, 25 kilometres north of the central Syrian city of Homs to deliver humanitarian assistance to the area for the first time in 16 months. Violence affecting the city has escalated since 2012, making it difficult to reach by UN agencies, until last month.

After such a long time without being able to deliver assistance to children and families in al-Rastan, Dima and the UNICEF team were anxious as final preparations were completed in the morning. Dima, a programme assistant, was part of the team who would meet local community members to assess further needs while the delivery of much-needed assistance was made. Health and nutritional supplies, including vitamins, micronutrients and medicines as well as hygiene kits of soaps, detergent, shampoo and water purification tablets were to be delivered to more than 50,000 children and others in need.

UNICEF also brought clothes and blankets for children as well as stationery and blackboards to support schools and recreational kits designed to aid psychosocial support for children through games and team sports.

Arriving in al-Rastan, nothing could have prepared Dima for what she saw. The population of 110,000 is mostly made up of families displaced by fighting from other areas in rural Homs. Families have limited access to basic necessities. Bread is only available three times a month. Medicines are a rare sight in al-Rastan. So is electricity due to damage caused to infrastructure during the fighting and a shortage of fuel needed to operate power stations. With lack of electricity also comes lack of safe drinking water, as pumping stations stop working. Unconditional and continuous access to deliver humanitarian supplies and assistance is critical to support children and families in need in al-Rastan.

“Children are paying the highest cost of this war,” said Dima who is a mother of two herself. “In al-Rastan, I met children who have never seen the inside of a classroom, children who work long hours every day to help their families put bread on the table.”

“I’m a mother and there is nothing I would not do to see my children safe, happy and healthy, just like the mothers I met that day,” said Dima. 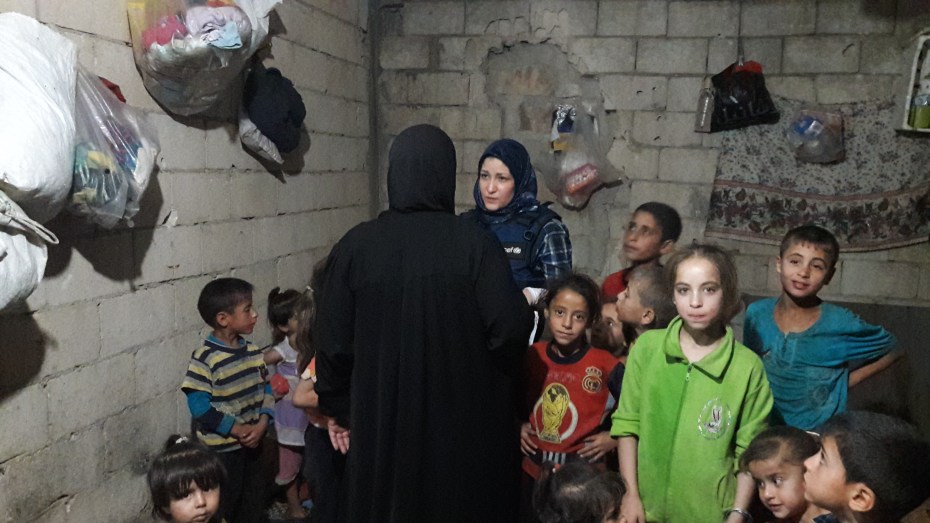 Dima visiting a family of 33 people, who live in one unfinished apartment in al-Rastan. The family uses plastic bags hung on the walls of the apartment to store their few belongings. Families uprooted from nearby villages by fighting have taken refuge in al-Rastan, staying in unfinished building complexes, with host families or in the homes of families who have already left the city. “I was so moved by the fact that they weren’t even complaining. All they wished for was a bathroom they could use instead of the makeshift toilet in an open space near the shelter,” said Dima after meeting the family.