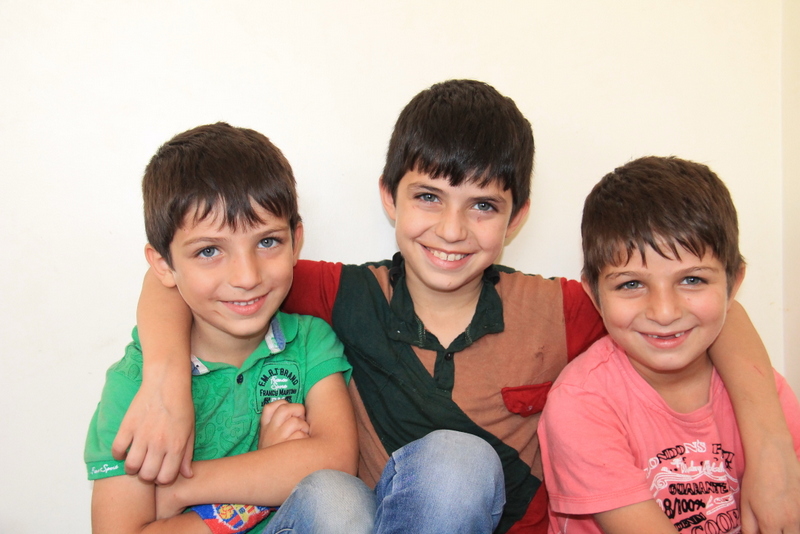 Irbid, Jordan 31st August 2016 – The excitement is obvious. Not only for Bakr, the eldest but also his sibblings Hamzah and Abdul Malek. At 7, Abdul Malek will attend school for the first time, whilst his two elder brothers attended briefly in Syria before they left and in Jordan when they arrived.

“I missed my friends, I missed my teachers and I just missed learning a lot of things. Now I cannot wait to start school again,” says 10 year old Bakr.

His mother Wafa’a says they arrived from Dera’a three years ago and settled in Irbid. They tried to enrol the children in public schools but there was no space. The only option was a private school that demanded 30JDs per month per child. That solution was however short lived. After a year, things changed and the children had to drop out of school.

“My husband decided to go to Germany via Turkey and used all the savings we had so he could get a job there and take care of his family. He paid JD 2,000 for a boat ride that took him 15 days and left me with little money.”

Keeping the family together was a struggle, Wafa’a had to withdraw the children from the private school as she couldn’t afford the monthly 100 JD for their fees. Determined to let her children get an education, Wafa’a sent them to a UNICEF supported Makani Centre run by the Islamic Charity Centre Society (ICCS). For six months, the children had access to learning support in Maths & Arabic and also benefitted from psychosocial support.

“Imagine my excitement when Hamzah came home last week and said they had been told that they could register in school. My children could go back to school for free,” she says, smiling.

This follows commitment by the Ministry of Education to open an additional 102 schools that will work in morning and afternoon shifts, bringing the total to 200 schools operating double shifts. In addition, children who have missed more than three years of schooling will be able to register for ‘catch-up’ classes, to accelerate their learning and help them enrol in class. This will enable the schools to accommodate as many children as possible who are out of school. It is estimated that there are 91,000 Syrian refugee children out-of-school in Jordan.

“UNICEF is complementing the massive effort and commitment of the Government of Jordan by backing a nationwide school enrolment campaign, called Learning for All – Back-to-School, in close cooperation with the Ministry of Education and civil society partners targeting 200,000 community members, including families, caregivers and children,” says UNICEF Representative Robert Jenkins.

Rolled out through multiple media channels and door-to-door outreach, the campaign encourages all children, regardless of nationality or status, to register at their local school or education field directorate. With support from Canada, the European Union, Germany, Norway, UK, and the US, aims at enrolling all Syrian children when the new school year starts on 1 September 2016. Bakr, Hamzah and Abdul Malek have already registered and look forward to going back to school on September 1.

“I am so happy I am going back to school. I can only become a doctor if I finish my school. I like helping people. I want to become a doctor so I can help people but I also know I will make a lot of money,” says Bakr.