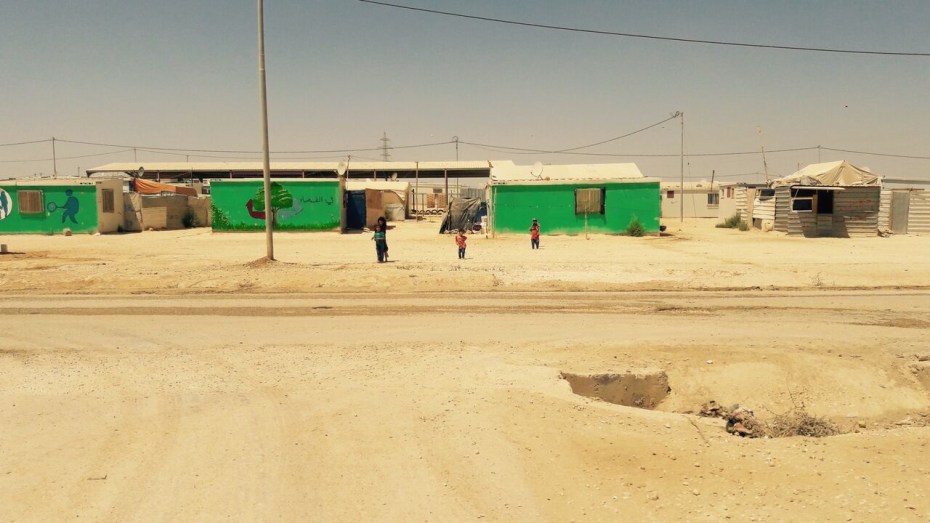 UNICEF/MENA/Dakhlallah Children playing at Zaatari camp. Some of the camp inhabitants have painted their homes to add a little colour to the bleak surroundings.

I feel that I have been here before. It is intensely familiar: the long drive along deserted highways under a baking sun, whizzing past a lone shepherd herding a flock of sheep, then a desolate petrol station.

Past the checkpoint, we approach some dusty streets lined with pre-fab houses. They used to be tents – I think to myself – in 2009. Then I remember that this isn’t Syria, but Jordan, and these refugees are not from Iraq – but from Dar’a province and rural Damascus.

This place is much bigger than the one I knew – better organised – and the structures are more permanent. We visit a sewage treatment plant that treats 80 per cent of the wastewater generated in the camp, and we are told that a water distribution network is in the works.

Seven years ago, working for UNHCR in Syria, I became well acquainted with two desert camps hosting Palestinians from Iraq. In those places, the Palestinian accents belonged to the refugees, the Shami cadences to the national staff.

This time the Syrians are the refugees. 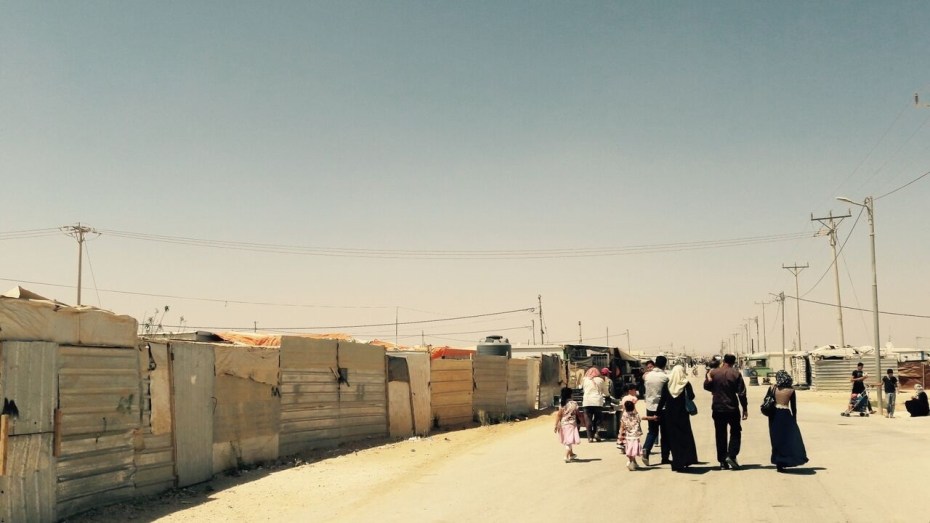 This is Zaatari, famously the world’s second largest refugee camp. This four square-kilometre city in the desert is ‘home’ to 80,000 people, half of them children. About 25,000 are school-aged, but some do not bother with learning in the sweltering desert heat. UNICEF is working hard to set up the infrastructure to keep the school leavers in the minority. Nine double-shift schools operate throughout the camp, with Jordanian teachers appointed by the Ministry of Education, and two more are under construction. Nearly 20,000 children are now enrolled. The girls attend in the mornings, and the boys in the afternoons.

We are shown some charming handiwork – a crib, a jewellery box, vests, and even a wedding dress. Of course, people marry in this place, they start families, and lead ‘ordinary’ lives. 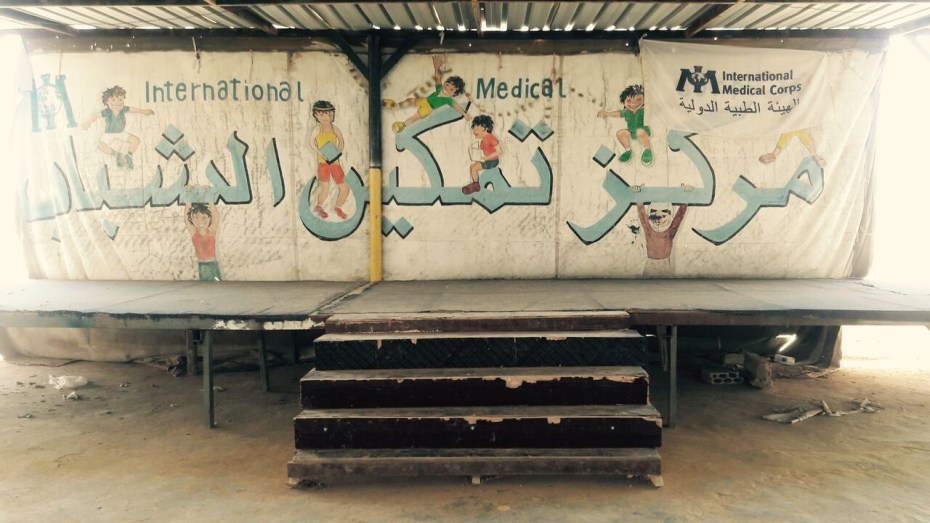 We meet some children at a Makani centre, which means My Space in Arabic, where they receive psychosocial, education and life skills support. Smart, lively young girls play computer games.  “What are you working on?” I ask Arwa (11) perched in front of a screen. “The sky game,” she says matter-of-factly. I suppose everyone knows the game but me. In the courtyard, a group of younger children try to impress me (or rather, my camera) by frantically pulling at the opposite ends of a rope, but quickly forget that I am there once the tug of war gets going.

A tin shack catches my attention – with the words al-Ameed Coffee painted across the front. The man behind the counter and his son greet me with warm smiles. Abou Anas and his family arrived in Zaatari from rural Damascus three and a half years ago. He named his shop for the famous Jordanian coffee brand because, “that’s what we started out with and we are still selling it.” He insists on offering me something to drink and then bats away my protestations that I should pay for a bottle of water. He smiles as he hands it to me, “You are giving us free advertising!” Duly, I post a photo of his shop on my Twitter account when I get home that evening.

Water in Zaatari comes from 450m deep borewells dug, purified and delivered by UNICEF and partners. It is distributed by trucks driven by refugee volunteers. Each refugee gets 35L of water per day. Much of the work in the camp is done by the Syrians themselves as part of a cash-for-work programme. Others supplement their income through old-fashioned free enterprise, and we can see their businesses all along the bustling Souk Street, also known as the Champs Elysees. Why? I’m told:  “There used to be a mobile French military hospital here until end 2013, which inspired the alias.”

I walk into an impressive food store proudly manned by Khalil Abou al-Yabes from the town of Inkhil in Daraa province. It has all manner of nuts and kernels, dried fruits, sweets, and whole grains neatly laid out for customers. He set it up only two months after arriving at Zaatari more than three-and-a-half years ago. 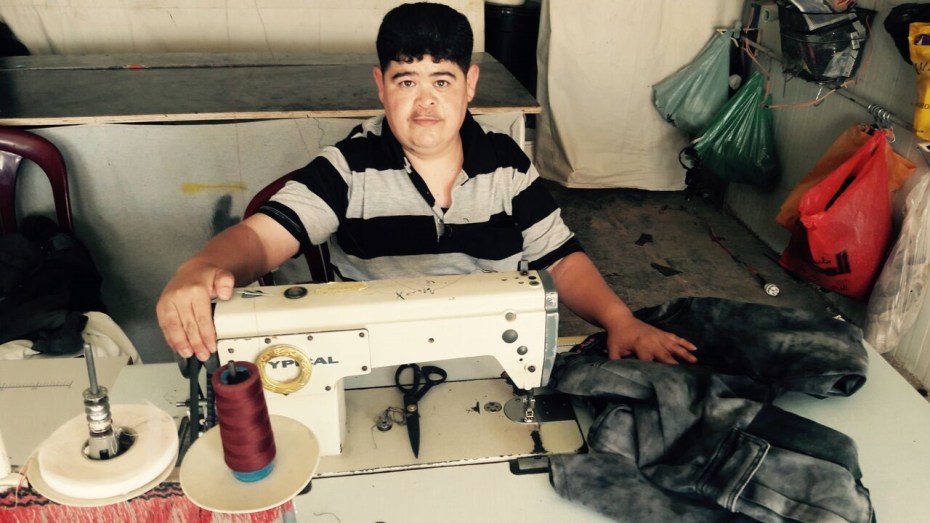 UNICEF/MENA/Dakhlallah
Shaker al-Omary came to Zaatari three years ago, where he set up this tailor shop named after his hometown Daraa al-Balad

Across the street Shaker al-Omary, with some reticence, allows me into his tailor shop, named after his hometown Daraa al-Balad. At first he only grants permission to take pictures of the shop. “I don’t want to be in the press”, he says with furrowed brow. We then begin to chat about the two birds chirruping in a cage hanging overhead. “They are called Birds of Heaven”, he says. “I was a well-known tailor in Deraa al-Balad before I came to the camp three years ago. I’ve taken more advanced courses since then.” He gestures to his certificates, framed by strips of cloth, on the wall. “Take a photo of them.”

Finally Shaker agrees to be photographed sitting at his sewing machine and I feel a twinge of journalistic pride at having gained his trust. Before I depart, he makes me write down the UNICEF website and my Twitter handle. “I want to see the photo when it is published.”

I leave confounded as to why this is happening again. Every day new arrivals escaping the hell in neighbouring Syria enter the newer al-Azraq Camp on the eastern border. And five years on there is no end in sight to this war. Why do we, why would any human, allow it to go on?

As we drive out of the UN base camp, young boys no older than 12 or 13, their bikes leant against the outer wall, crouch in the shade, each intently staring at a mobile phone. “They are trying to get on the base camp’s WiFi network,” our driver remarks. Internet access throughout the camp is

*Zaatari, the largest refugee camp in the Middle East, was established in Jordan on 29 July, 2012 to house refugees escaping violence in neighbouring Syria