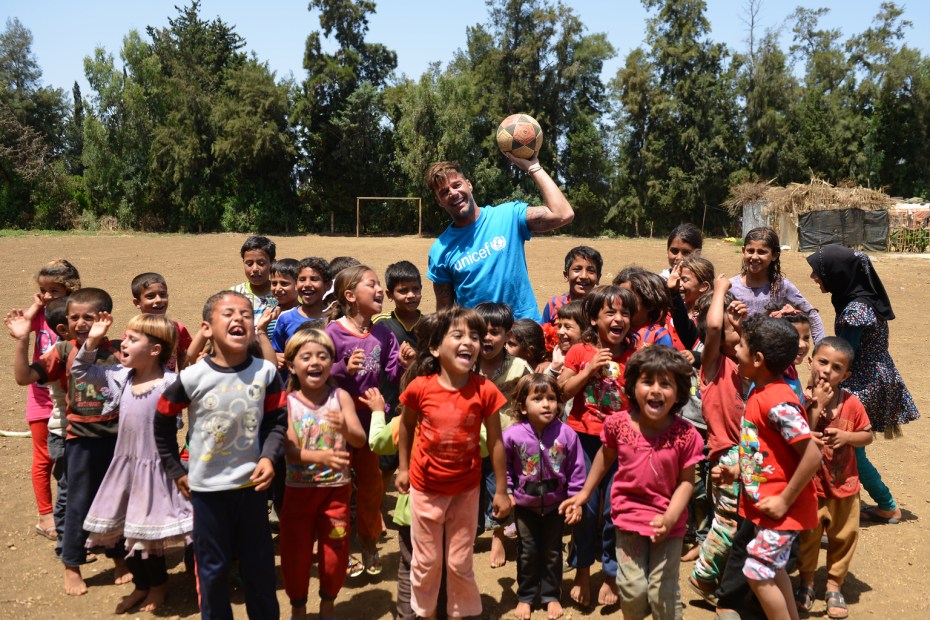 BEIRUT, 3 June 2016 – World-renowned singer and UNICEF Goodwill Ambassador Ricky Martin calls for increased focus on safeguarding the futures of millions of children affected by the Syria conflict, whose lives have been shaped by displacement, violence and a persistent lack of opportunities.

Around 1.1 million Syrians have sought refuge in Lebanon since the start of the crisis in 2011, more than half of them are children. Child refugees are particularly at risk of exploitation and abuse, with large numbers being left with no choice but to go out to work, rather than attend school.

“We are in the sixth year of a crisis that has impacted the lives of millions of children and their families. An estimated 2.8 million children are now out of school in the region. I met children who have been forced to become breadwinners for their families, working up to 12 hours a day,” said Martin. “The world must do more to make sure these children are protected from exploitation and given access to safe environments where they can learn and be empowered.”

Martin was most impacted by the story of Batoul, an 11 year old girl from Homs, who has to work in exchange for water and shelter. Batoul with her two older sisters and mother are the only bread winners in their family of 13. “I don’t get paid any money. I work very long hours harvesting broad beans, cherries, potatoes – whatever is in season”

The deteriorating economic situation for Syrian refugees has dramatically exacerbated the problem of child labour in Lebanon. Adding to the psychological distress already affecting many of the children who have fled conflict and violence at home is the challenge associated with some of the worst forms child labour such as working on construction sites, which can cause long-term developmental and psychological damage as well as physical harm.

UNICEF, together with its partners, is trying to address the direct causes of child labour by combating poverty, providing free education and economic opportunities for parents and youth of working age, and identifying children working in the worst forms of child labour and giving them access to other opportunities such as learning.

During the two-day visit, Martin also witnessed how UNICEF is working to provide protective environments for children and adolescents where they can play and receive the support they need to get back into formal education. In Lebanon’s Bekaa valley and Akkar, Martin participated in recreational activities for children at safe spaces in informal settlements. Additionally, he met adolescents attending life-skills training, provided by UNICEF and partners, where girls and boys are given vocational training and learning support.

UNICEF is working closely with the Government institutions, as well as local and international partners, to meet the needs of over 800,000 vulnerable children who have sought refuge in the country with a focus on health and nutrition; education; child protection; water, sanitation and hygiene; and support services that specifically target adolescents.

“I am inspired by the courage of these children. They are gaining the knowledge and skills they need to contribute to their families, communities and societies when they reach adulthood. Investing in their present is an investment in the future of the region,” said Martin.

In his role as UNICEF Goodwill Ambassador since 2003, Martin has been a passionate defender of children’s rights with a focus on advocating for the protection of children against exploitation, abuse and trafficking.  Additionally, UNICEF and the Ricky Martin Foundation have collaborated to end atrocities against children such as child trafficking and child labour.

UNICEF promotes the rights and wellbeing of every child, in everything we do.  Together with our partners, we work in 190 countries and territories to translate that commitment into practical action, focusing special effort on reaching the most vulnerable and excluded children, to the benefit of all children, everywhere.