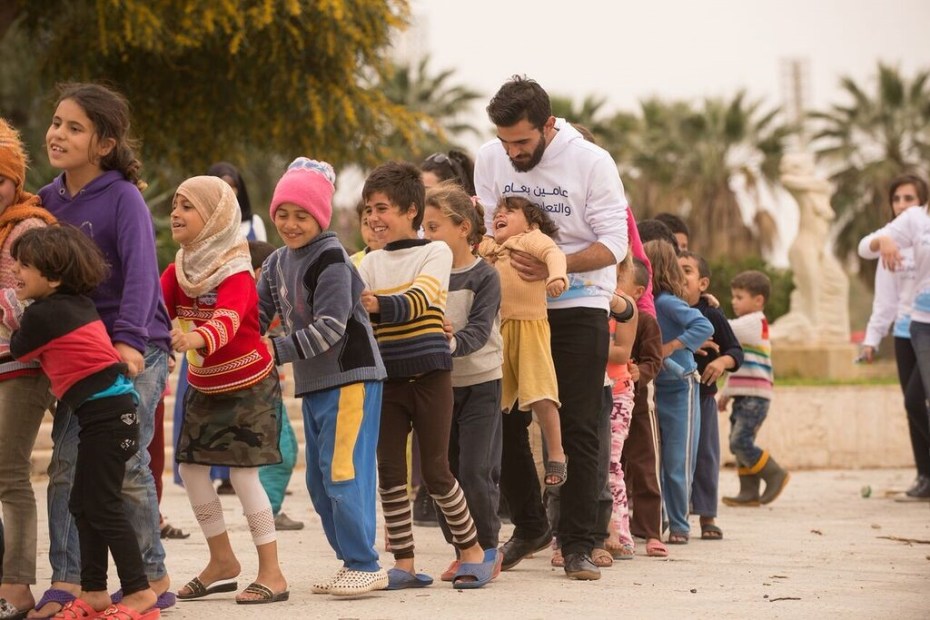 22 year old volunteer, Bilal, carries a laughing child during an open day of games, plays and puppet shows for out of school children in rural Lattakia, Syria.

“I believe in volunteering for this cause because seeing a child smile is worth the world. I feel like I’m working for my country and its children, no matter how small my role is,” said Bilal, a graduate of hospitality and English translation.

Bilal, along with hundreds of Syrian youth, volunteers with UNICEF’s education campaign promoting ‘Curriculum B’ – a new learning programme specifically designed for students who have missed out on education due to violence or displacement.  This innovative fast-tracked learning programme combines each two educational levels in one year, cutting the required years of education in half and allowing children to catch up with their peers.

“We as youth are now responsible to improve our society, which was severely affected by this ugly war. It’s a duty on our shoulders to make sure every child is in school.” Bilal added. “We are more capable than anyone else to reach children because it wasn’t so long before we were children ourselves; we understand them.”

Bilal enjoys theatre and he uses it to promote education. Along with his colleagues, he created several innovative plays and interactive theatre performances, all based around the right to education.

“I feel that theatre can get any idea across and grab the attention of children and adults alike. They all enjoy what we perform.” 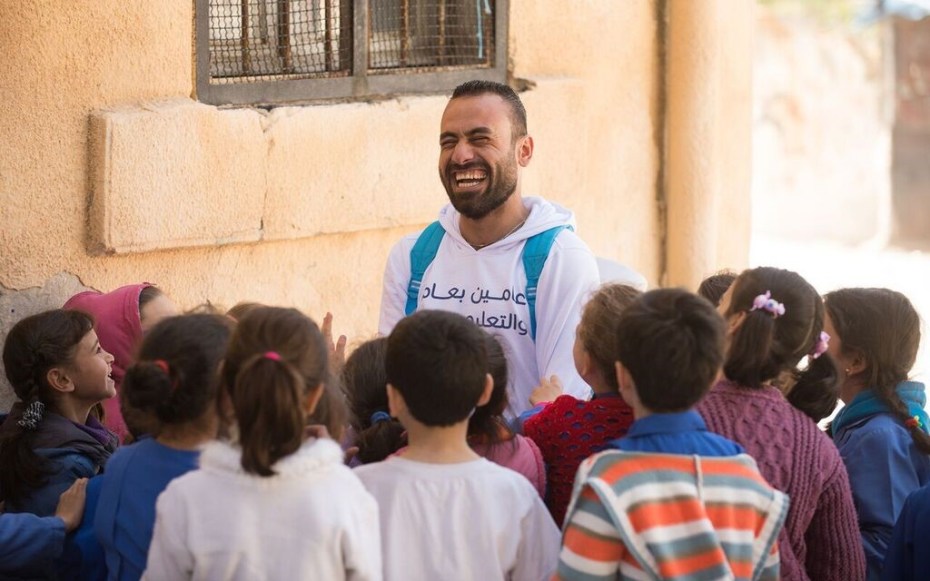 Children gather around 24-year old volunteer Mohammad, following a play in which he played the role of a student during the Curriculum B campaign, in rural Lattakia, Syria. Curriculum B is an innovative, condensed and accelerated learning programme that helps dropped-out children to catch up with their peers.

A graduate of psychology, Mohammad is passionate about working with children.

“To me, volunteering is the way I pay back to my society. When I was in school, it was volunteers working in a developmental programme that helped my mother start a small project; and it was this project that allowed me to finish my studies at school and university. I wanted to pay back this debt.”

Mohammad believes that youth have a bigger responsibility to do all that they can for a better society.

“We are the generation in the middle, we can reach both children and their parents easily; we can also contribute to the mutual understanding between them,” he said.

Evident in his photo, Mohammad believes in theatre, games and humor to reach children.

“Laughter is the fastest way to a child’s heart and ‘having fun’ is the best way to earn his trust and give him your educational message.” 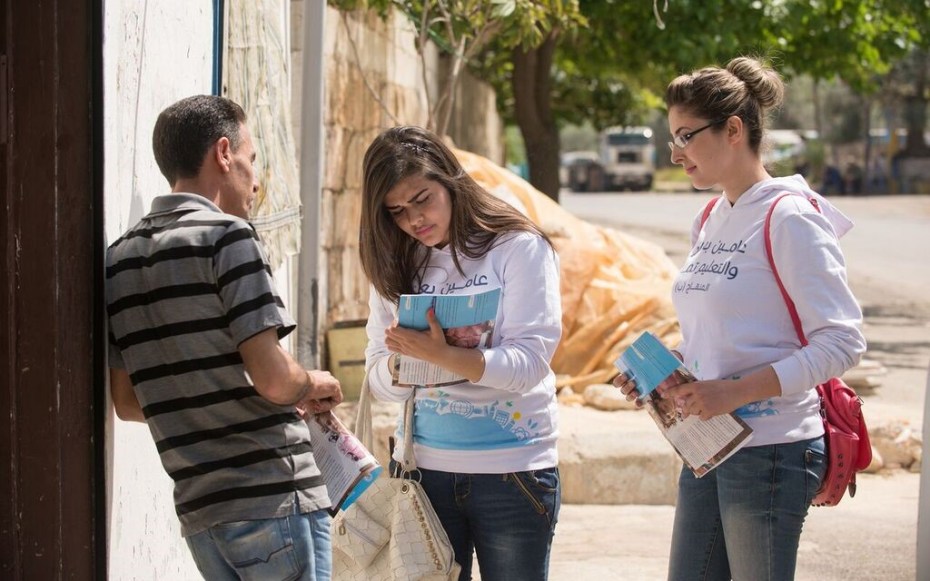 27 year old Layal (right), and her friend, performing door-to-door visits informing their peers about a new catch up learning programme in rural Lattakia, Syria. During these visits the young volunteers track the numbers, locations and situation of out-of-school children and encourage their parents to register them in the nearest school providing Curriculum B, an innovative programmes that UNICEF has designed to allow children who were forced out of school to re-integrate in the formal education system.

A graduate of business administration, Layal believes in the role of youth in bridging the gap between children and their parents.

Using original and new ways to reach concerned children, Layal finds songs and theatre to be the most effective in getting the campaign’s messages across.

To this end, several UNICEF partner NGOs in the coastal governorates of Tartous and Lattakia have professionally produced songs about education in Syria. 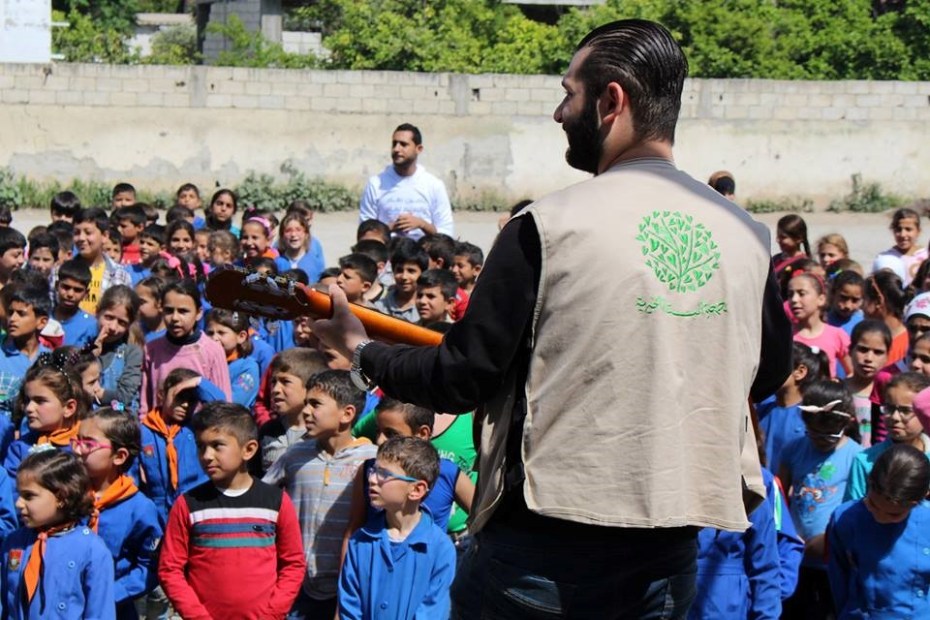 22 year old volunteer, Laith, playing the guitar to dozens of children during an open day of games and musical and theatrical shows at a school implementing the Curriculum B programme in rural Lattakia. The condensed programme targets half a million out-of-school children across the country with integrated education including lessons in math, science, Arabic, English, music, physical education and painting.

“I have been volunteering for 7 years now; I have a passion for volunteering and working as part of a good team, to deliver beneficial messages to children.” Said Laith, a graduate of computer engineering.

Laith believes that the young generation has the biggest and most positive role to play in society.

“Our advantage is that we can be children sometimes, and adults other times. We can reach the hearts and minds of both children and their parents.”

Being a musician, Laith finds songs and music to be the best way into a child’s heart because they incorporate both audio-visual aspects. 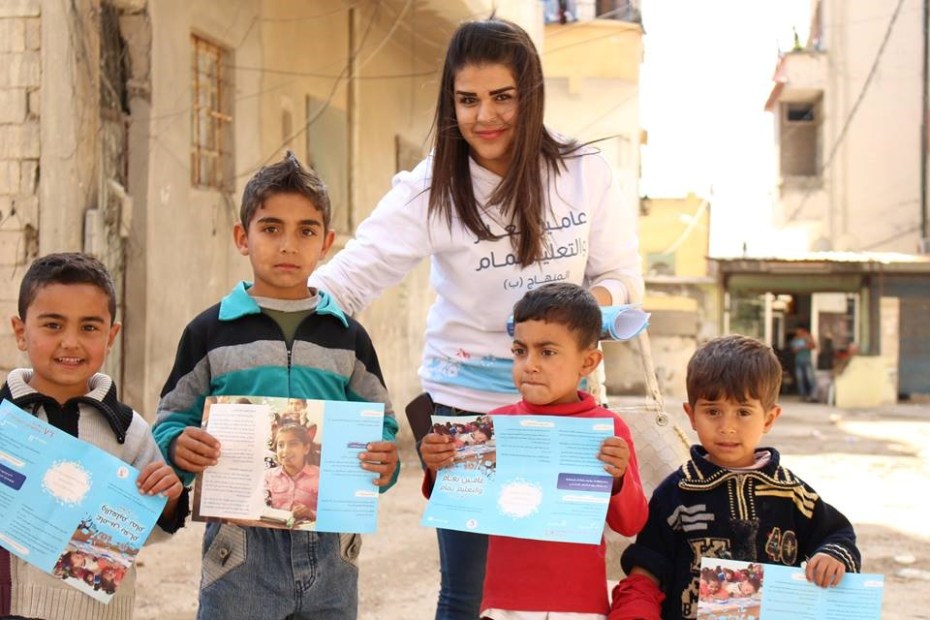 Loujain, a 20 year old volunteer with the Curriculum B campaign, hands out informative flyers on education and school registration to children in rural Lattakia. The programme welcomes children who have missed out a year or two of education and provides them with condensed, accelerated learning to be able to catch up with their peers. The flyers read “two years in one, education is fun!”.

“We should reach as many children as possible to make sure that those who have missed out on their education go back to school. While my role might be small, I find that any community-led initiative coming from the heart of this young generation, will go a long way in developing this society.”

“Children look up to youth and consider them role models which makes a message coming from a young volunteer more accessible for children.” 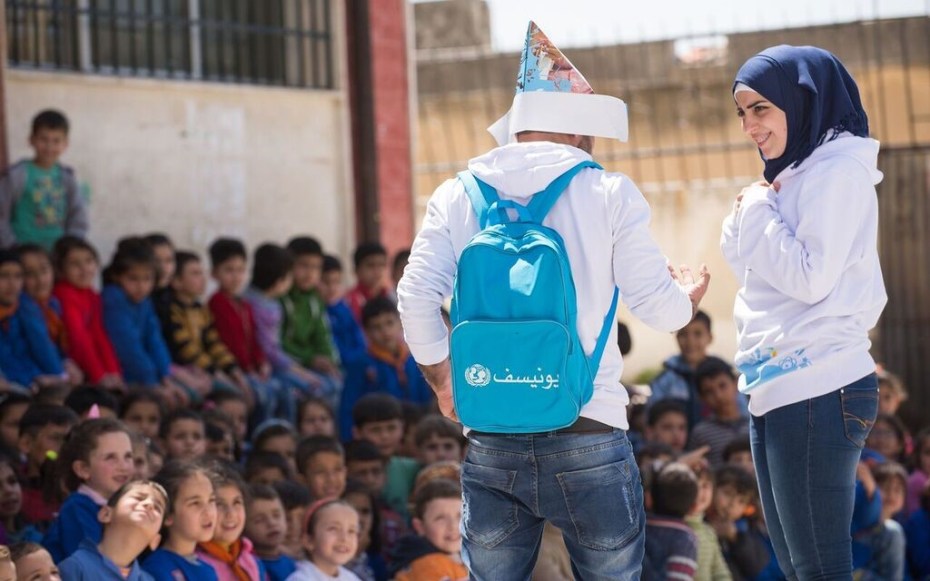 21 year old Siba and her colleague performing a play during a campaign in Lattakia, aiming to reach out of school children and get them to re-enroll and catch up with their peers in half the required time.

Studying psychology, Siba finds pleasure in working with children and likes to be engaged in humanitarian work and an active citizen of her society.

“It’s our role as a young generation to put a smile on these children’s faces; they need us. We’re the ones most capable of reaching them, being close to them and gaining their trust and engagement.”

Siba enjoys performing plays and interactive shows for children and believes they attract their attention and engagement the most. 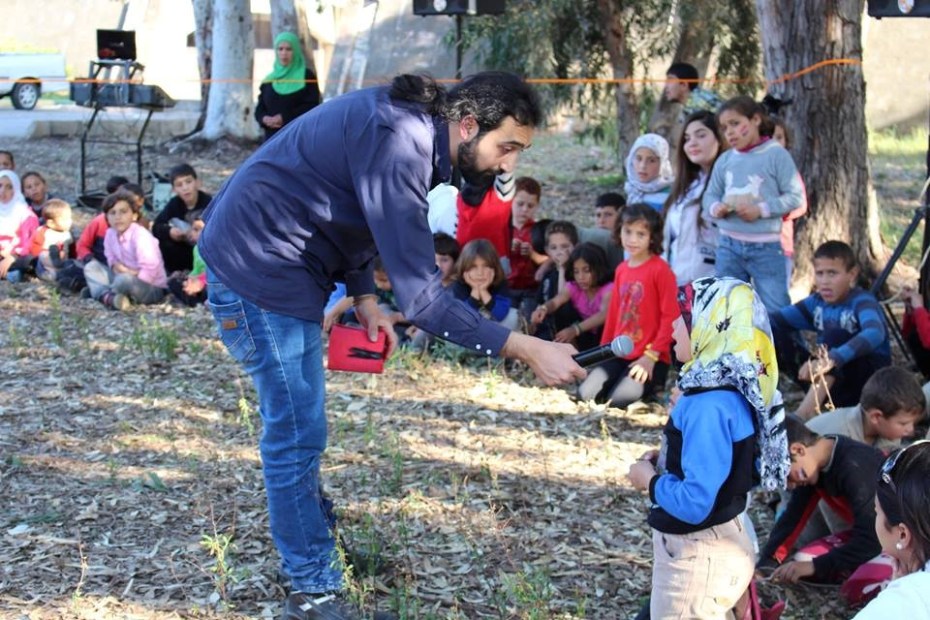 Mohammad, 27, a graduate of media and a volunteer with a partner NGO, during an interactive theatre show with children in Lattakia. The show was designed to attract out-of-school children and encourage them to re-enroll in one of UNICEF’s alternative learning programmes, implemented at schools across the country.

“I believe that volunteering is a great shaper of personality and a positive influence on the community we live in. I believe in the messages I disseminate to children and their parents; I start with reforming myself before working on my society.”

Mohammad has a long experience in theatre, storytelling and interactive musical shows with children for different societal campaigns.

“We as young people have the energy and capacity to adapt to every community we target with our messages, which creates mutual understanding between us.”

Mohammad believes that interactive theatre is the best way for children to express their feelings and present their thoughts in a non-traditional way. 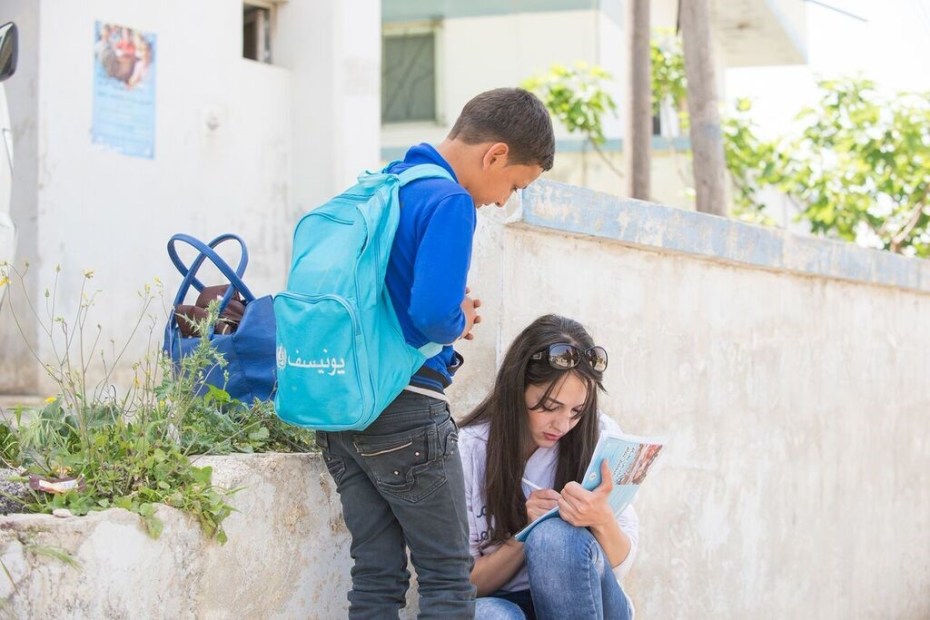 “I do volunteer work because it’s the way I can benefit my society,” said Nairuz, a graduate of Spanish literature.

“We are a generation with enough energy and ability to serve the Syrian society, even as it goes through so many problems and obstacles.”

Nairuz believes that the role of the youth is to motivate both children and their parents. “Our generation gives a good image to parents about youth and what their children can do when they grow up. This in turn encourages them to support their children in building their future. As for the children, our generations gives them hope and optimism despite the hard circumstances they live every day.” 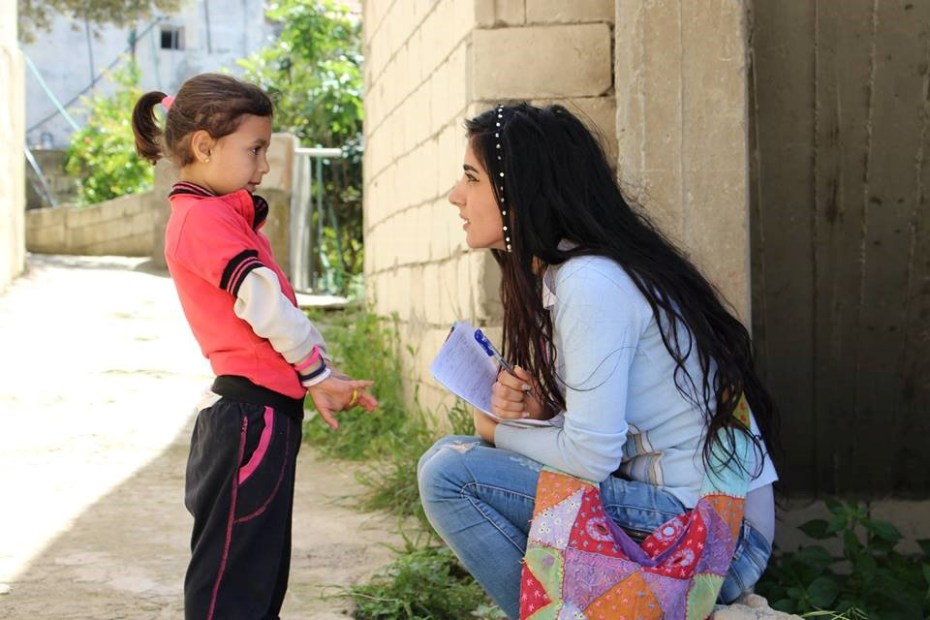 Working towards her degree in French literature, Hiba is very passionate about the Curriculum B Programme, designed to reintegrate out-of-school children in e\formal education to catch up with their peers.

“I want to contribute to combating illiteracy in my country,” said Hiba. “It’s one of the most important problems to face in our society, and it’s our responsibility as youth to do so. We are an educated generation of university students and graduates; it’s our responsibility to make sure that all children get the same chance.”

Hiba believes that theatre is the best way to reach children and interact with them. 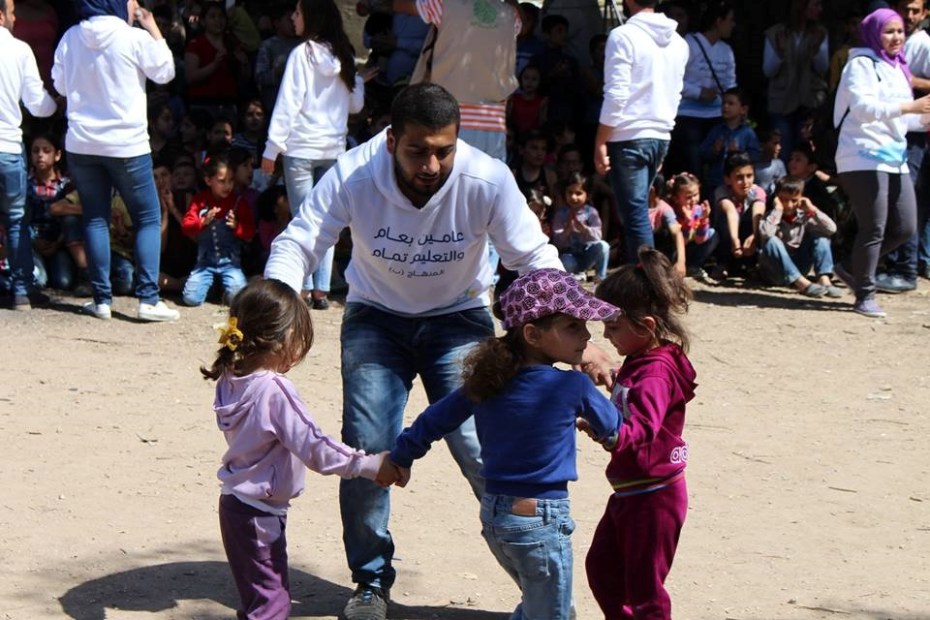 23 year old Deeb, playing with children during an open day of activities, designed to introduce the Curriculum B programme to children in rural Lattakia who have missed out on education due to violence and displacement.

A graduate of psychology, Deeb believes that volunteer work is a great way to apply his theoretical education in real-life experiences, while benefiting children at the same time.

“When we- the youth- work hand in hand, we can do the impossible… We can re-build the Syrian society,” he said.

Deeb believes that games are the best way to reach children and keep their attention.

“We are the most capable of influencing children and inspiring them because we are close to them in age; we understand how they think and what draws them.”