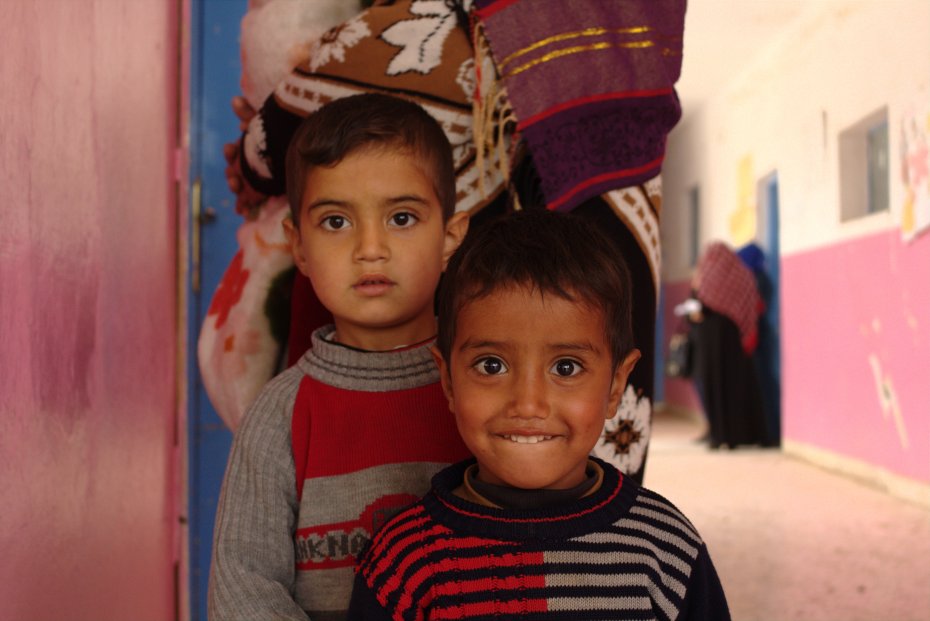 Majed 4 and his brother Adnan 3 suffered from a cold. They came to the mobile clinic to receive health care. UNICEF supported mobile clinics provide medical and nutrition support for 12,000 children and pregnant and lactating women in the poorest rural parts of Al-Hassakeh governorate, in the far north-east of Syria. After five years of devastating conflict, the damage to Syria’s health system has resulted in increased mortality and outbreaks of communicable and vaccine preventable diseases ©UNICEF/2016/Qamishly/Masoud Hasen

In far north-eastern Syria, health needs of thousands of children and their families increase while the war enters its sixth year. In Al-Hassakeh governorate, over 300,000 people are displaced and over 750,000 are in need of urgent humanitarian assistance.

Eight km to the south of Qamishly city, children and women were waiting for their turn to enter a school converted into a medical centre for the day. This UNICEF-supported mobile clinic moves between 15 different locations in the southern rural area of Al-Hassakeh – to Tal Hamis, Yarobiya and other towns and villages which are among the poorest parts of the governorate. Doctors diagnose, treat, and refer patients to hospitals and specialised clinics and the clinic covers the cost of some operations including caesarean births.

This is the second time Muhammad brings his four children to the mobile clinic for a follow-up doctor visit. “My children had cold and I followed the instructions the doctor gave me last time I was here. My children got better. They are more active and energised,” Muhammad says.

Just like many others in this part of Syria, Muhammad used to be a farmer until the fighting pushed him off his land, his only source of income. Since then, he has not been able to afford medical care for his children as cost of medical services and medicine has soared to over four times.

“Our aim is to reach 12,000 children and pregnant and lactating women with health services,” UNICEF Health and Nutrition Officer in Qamishly, Ibtisam Iskandar, said. “We are also working to treat moderate and acute malnutrition for almost 5,000 children under the age of five and 4,000 pregnant and lactating women through community management of acute malnutrition and provision of nutrition packages,” she continues.

A woman sits in the crowded corridor inside the school. She is holding her 3-month baby girl “Fatima” who looks too small for her age. Fatima’s mother is very worried about her: “I don’t feel she is growing. She has been like this since she was born and I don’t know why. I hope the doctor can treat her.”

One of the volunteer paediatricians examines Fatima and refers her for a specialist examination and laboratory tests in the city of Qamishly.

“The mobile clinic receives different types of cases. Some of them are beyond its capacity to treat or require laboratory tests,” Dr Iskandar said.

After five years of devastating conflict, the damage to Syria’s health system has resulted in increased mortality and outbreaks of vaccine-preventable diseases. Children are getting sicker more often. The erosion of basic health services includes a severe shortage of medical staff, ambulances, fuel and basic medical supplies and equipment.

As a result, over 11 million Syrians who require health assistance, including close to half a million living in areas under siege without access to adequate medical care.

“My husband died in prison few months ago, and my four children and I don’t have anyone to provide for us,” says a woman sitting in the clinic. “If this clinic did not exist, there is no way I could afford taking them to the doctor,” she continues.

So far, UNICEF and its partners provided through this programme the much needed health and nutrition assistance for almost 4,000 children and over 2,500 women with health services and another 6,000 children under five and 3,600 pregnant and lactating women with nutrition treatment and support.