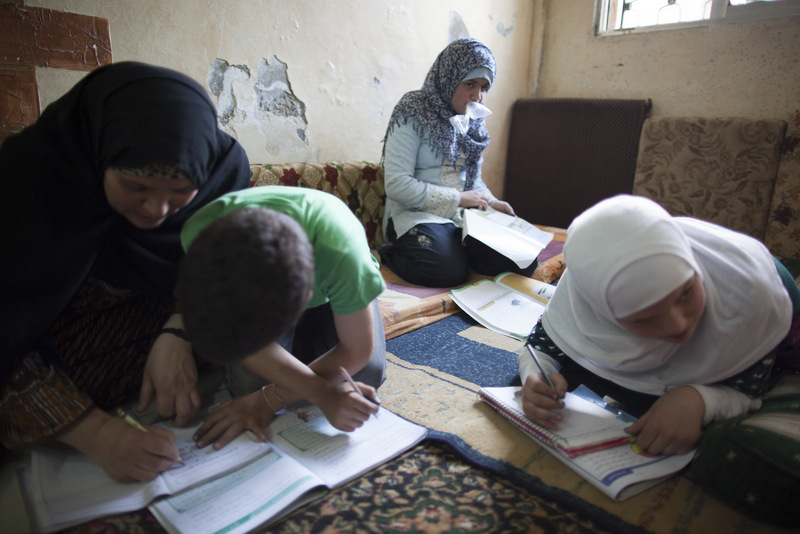 “As you can see, all my three children studying are in the same grade (5th grade) despite their age difference, because some lost a lot on their education,” says Um Al Majd, a mother of three children receiving the cash assistance from UNICEF . “The two girls are good in studying but the boy gives me a hard time.” Photo: UNICEFJordan/herwig

AMMAN, Jordan, 29 February 2016 – “The child money, for me, is like I’ve been in the desert and I’m so thirsty, and someone gave me a cup of water,” says Abu Yousef (name changed), a Syrian refugee father of six living in an urban centre in Jordan.

The ‘child money’ is an unconditional Child Cash Grant Programme initiated by UNICEF in February 2015. On average, 55,000 children from the most vulnerable 15,000 Syrian refugee families in host communities in Jordan were provided 20 JD (US$ 28) per child per month to help cover the basic needs of children.

An independent monitoring report on the first year of the programme indicates positive trends on the overall well-being of children from targeted families. Compiled by an independent third party monitoring firm based on three waves of monitoring in June, August and November 2015, the reports shows that 95 per cent of families reported using the grant to support their children’s needs.

Despite deteriorating circumstances, majority of the families were able to increase spending on basic needs for children – clothes, shoes, medicine, school related expenses, and fresh foods were the most frequently cited expenses.

Families reported that while their overall economic situation remains precarious, the child grant helped to stabilize their situation from preventing further deterioration. For example, the report showed that there was a marked decrease over the course of the year in the number of families dropping their children out of school.

“The child cash grant programme is one of UNICEF’s most efficient interventions in terms of having an immediate direct positive change in the lives of vulnerable Syrian refugee children in Jordan,” said the UNICEF Jordan Representative Robert Jenkins. “We will make every effort in raising funds for the continuation of this critical support to the vulnerable children and their families,” he added.

Supported by the European Commission’s Humanitarian Aid and Civil Protection Department (ECHO), the Central Emergency Relief Fund (CERF) and the Governments of Canada, Kuwait and the Netherlands, the child cash grants programme utilizes the Inter-Agency Vulnerability Assessment Framework (VAF) in order to identify its target group.

It leverages on the existing UNHCR cash assistance system which is exceptionally secured through biometric identity verification system and unrivalled in terms of cost effectiveness and efficiency, and supported by an independent third party monitoring and evaluation system to effectively and efficiently monitor progress at the activity, output and outcome levels. 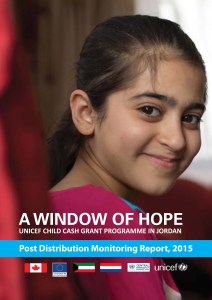