Aleppo, 6 January 2015 – “There was no glass in the window panes and I used to feel very cold,” said eleven-year-old Sarah, describing how her school was last year. “What irritated me the most was the scratchy desks, they made my hand writing look bad.” 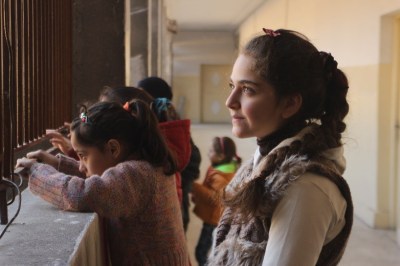 Sarah’s school is located in an insecure neighbourhood in Aleppo. Last year, it was attacked. Fortunately, it happened at night and no children were hurt. Despite the damage, the school continued to function.

Across Syria, one in four schools is closed because they have been damaged, destroyed, used as shelter or are inaccessible due to ongoing violence. Even before the attack on Sarah’s school, it was in a dire condition and overcrowded with children from the neighbourhood as well as other displaced children from elsewhere. “The restrooms were scary, I never went in even if I had to,” said the little girl. “The ground was muddy and taps had no handles. But the worst of all is that they were dark.”

In partnership with the Government of Japan, UNICEF has rehabilitated Sarah’s school this year. The windows’ glass were replaced. Cracked walls were fixed and painted. New furniture was provided. New drinking water taps and toilets were installed. Doors and lights in the restrooms were repaired.

To reduce overcrowding in classes, and provide a more appropriate learning environment and better quality education, UNICEF has also installed five prefabricated classrooms and prefabricated restrooms in the school.

“Investing in children’s education during a crisis is a vital protection mechanism and should be treated as a humanitarian priority,” said Jean Kariuki UNICEF’s Education Specialist in Aleppo. 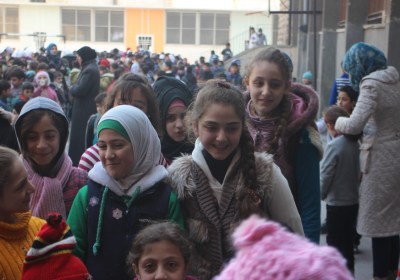 Sarah and her schoolmates during a recess. Sara’s school is one of the 51 schools rehabilitated with support from the Government of Japan in Syria. ©UNICEF/Syria/2015/Khuder Al-Issa

“This year my school is different. The walls are painted with bright colours,” said Sarah. “Restroom doors do not get stuck anymore and the best thing is the light in the restroom”. Sarah’s dark memories have left place for new dreams; “When I grow up, I think I will be an architect to build new schools for children in my country,” she said.