By Masoud Hasen and Shushan Mebrahtu

Deep winter has arrived in Qamishli, a city in north-eastern Syria. Temperatures have begun to drop as low as 3°C, making the harshest living conditions even more desperate. In a former primary school-turned-shelter, families forced to flee their homes live in crammed, freezing classrooms, using whatever materials they can find to try and keep warm.  Many of them burn firewood for cooking and heating, while others use litter they can collect from the streets.  Most cannot afford to buy stoves, the ones who can are always in need of money for fuel.

In these appalling conditions, it is the children who suffer the most. Amongst the 300,000 internally displaced people now living in Al-Hasakeh there are many children who have lost parents during the ongoing crisis. Most of them have been forced out of school and into work in order to help their mothers make ends meet. 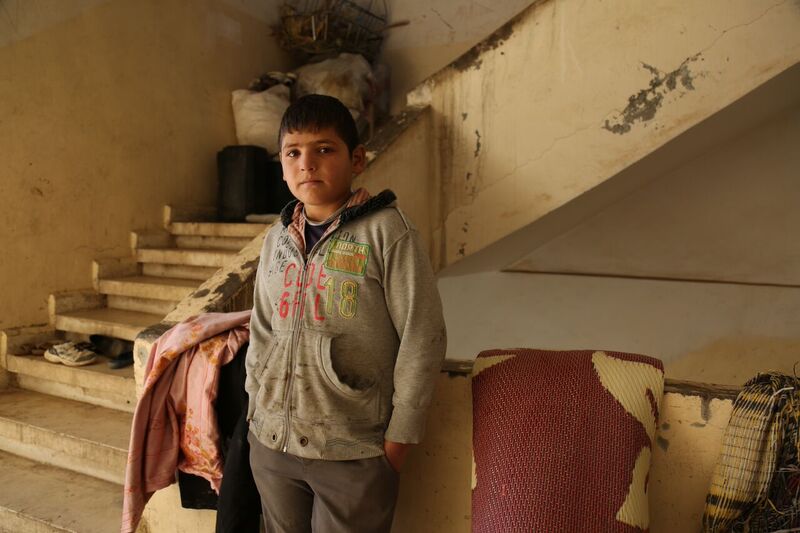 Ali outside the classroom where he and his family currently live in the Abulaziz primary school, Qamishli

Ali, aged 8, and his family fled their hometown near Tel Hamis in northeastern Syria almost a year ago. His father died from kidney failure a few months later leaving behind Ali, his mother and six siblings who now live in the Abdulaziz primary school with another 60 families.  Ali’s mother works full time but earns too little to provide even the most basic necessities for the family of eight.  Although Ali works in a sweets shop, his income of 250 Syrian Pound (less than US$ 1) is too meagre to make any difference.  But the difficult situation he is living in has not deterred him from perusing his education.  Ali goes to school in the morning and works in afternoons.

“I have been walking barefoot for the last two weeks,” Ali sobs as he tells his story to UNICEF.  “We have nothing to use for heating at home.  I want winter clothes and boots.”

“Our life back in the village was better than here,” Yasmin, Ali’s elder sister recounts with sad eyes.  “We had a beautiful house and three bedrooms for my parents and my siblings, and a nice garden in our backyard. My only dream is to go back to our home and live together as before.” 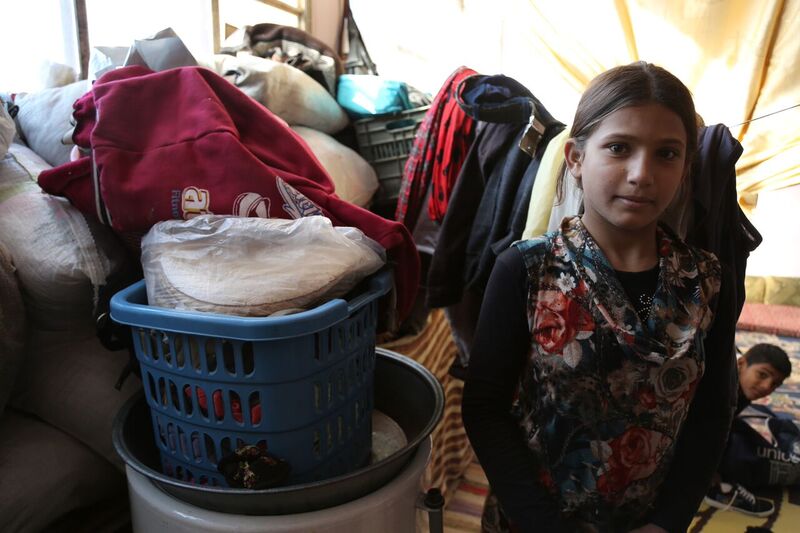 Yasmin, Ali’s sister in a classroom now turned home to her family. “We had a beautiful house and three bedrooms for my parents and my siblings, and a nice garden in our backyard. My only dream is to go back to our home and live together as before.”

For the over 6.5 million displaced people, basic resources for winter are particularly difficult to come by. Forced to leave at short notice, families often arrive at shelters like Abdulaziz School with only the clothes they have on. No matter how hard they try, whatever they earn never seems enough. Many families’ finances have been exhausted; making purchases of essential items such as fuel, warm clothing and blankets impossible.

Refet Souliman, a 55-year old widow fled her village of Sharmoux.  “I left empty handed after my village was attacked and saw two of my sons killed,”  She and her six remaining children now live in the Abdulalziz School with 68 other families where keeping warm is a daily struggle. “Because I stay at home to look after my disabled son, we have to rely on one daughter to earn enough for all of us,” she explains. “The school is so cold, especially during the night with no furniture or fuel. Yesterday we bought an old fuel heater, but we still can’t afford the fuel.”

To help children and their families like Ali’s and Refet’s face the hard weather conditions ahead, UNICEF has launched a Winterization Response plan, targeting over 1 million Syrian children with clothes, blankets, and school heating supplies. So far UNICEF has procured 363,000 locally produced winter clothing kits, 116,300 blankets and 2,000 school heaters. The focus will be on children who have been hit the hardest, including the internally displaced.

“The cold weather will be even more challenging for Syrian families whose coping mechanisms have been stretched to the limit.”  Says Hanna Singer, UNICEF Representative in Syria. “It is a life-saving necessity that we provide winter support to ensure that their children are adequately cared for and kept warm.”