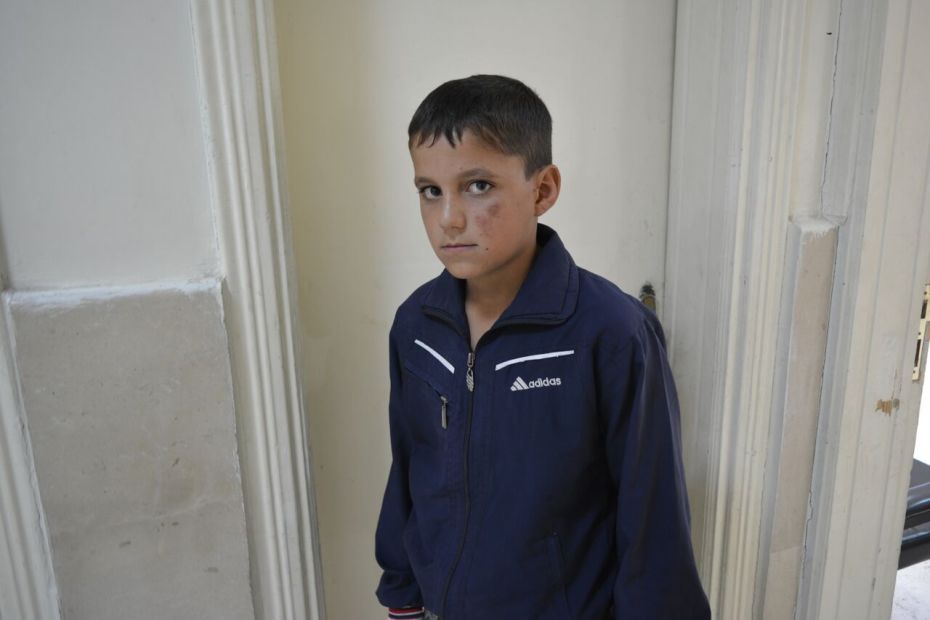 Aleppo, 19 November 2015 – 12 year-old Saad has a blister on his left cheek. Appearing over a year ago, the blister became increasingly bigger and deeper. Saad didn’t know what it was until a health worker referred him to the Leishmaniosis Control Centre in Aleppo, where he started his long treatment; a monthly injection in the blister. Without this treatment, the blister can spread and leave a permanent scar.

“The injection is so painful,” Saad said. “I have had 14 injections so far and still need more.”

The Syrian war has had its toll on the northern city of Aleppo, leaving entire neighbourhoods severely damaged. The poor sanitation and lack of proper waste management has created a breeding ground for flies and other disease-spreading insects.

“Leishmania spreads through sand flies that usually live in wet areas, rubbish collection points, near damaged buildings and construction sites which is unfortunately the case in most Aleppo neighbourhoods,” said Dr. Esraa Al-Khalaf, UNICEF’s Health and Nutrition Officer in Aleppo.

Saad was bitten by a sand fly while working for a blacksmith in one of Aleppo’s neighbourhoods. He dropped out of school when his family fled conflict in their neighbourhood four years ago.

“I need to help my family, so I work as a blacksmith assistant. I help install doors in new buildings.”

Saad’s case is not unique in Aleppo; Leishmaniosis is spreading across the embattled city with the only treatment being the painful injections that Saad must endure. The best way to combat the disease is through prevention and raising awareness.

UNICEF supports a Leishmania Insecticide Spraying Campaign that has so far reached over 150,000 people in 11 epidemic locations in Aleppo and its rural areas. The campaign relies on more than 100 young volunteers, mostly university students.

“We find some difficulties, like in Minyan village. People are unaware of Leishmania. They treat it like a regular mosquito bite which increases the danger of the infection,” said Marah, a volunteer with the campaign.

The volunteers conduct door-to-door visits, spray houses with insecticides and distribute flyers about Leishmania. “Our role as volunteers doesn’t stop at giving away flyers. When we meet illiterate people, we read the flyers for them,” she explained.

“I take a break from my job to come and take my injection,” Saad said. “But when I recover, I will take breaks to play.”