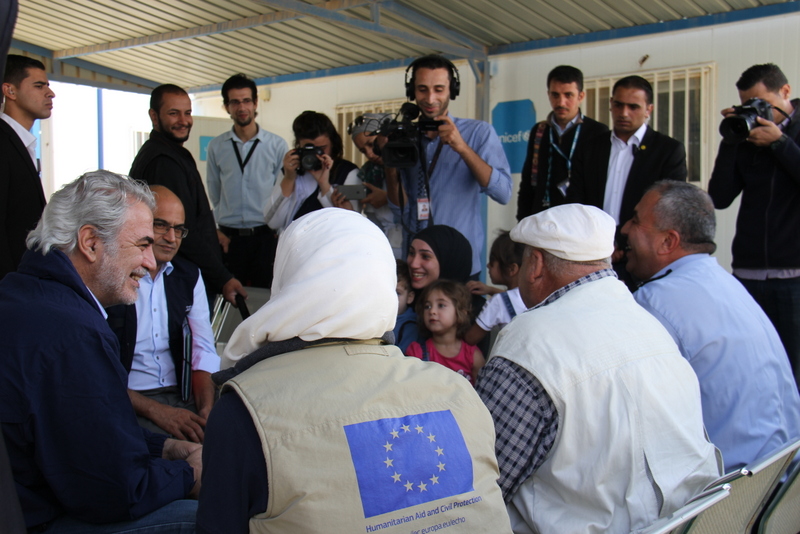 The families receiving assistance under the grant include 15,000 of the most vulnerable households. They include families with children living below the poverty line, female-headed households, households with children under five years, and families taking care of unaccompanied and separated children.

Between February and August 2015, the CCG programme supported by EU humanitarian aid, the Central Emergency Relief Fund (CERF) and the governments of Canada and Netherlands, reached over 55,000 children from 15,000 vulnerable Syrian refugee households in host communities,[1] with JOD20 (~USD28) per child per month.

The grant provides a safety net to families, designed to prevent them from turning to negative coping mechanisms that can impact on a child’s well-being, including early marriage, child labour, school dropout and reduced food consumption.

“If we didn’t get this money, it wouldn’t be good at all. I would have to drop out of school and get a job,” says 15 year old Syrian refugee, Areej (not her real name). Areej lost her mother and elder brother to the conflict, and her father has returned to Syria, leaving Areej as the primary caregiver to her four younger siblings.

Independent monitoring of the programme showed that in the first five months, the grant was achieving its goals. 93 per cent of families reported using the grant to support their children’s needs, with clothes/shoes, medicine, school related expenses, and fresh foods the most frequently cited expenses; 57 per cent of families reported avoiding the use of at least one negative coping strategy affecting children.

“The grant has provided vital help for desperate families who are having to make some difficult choices”, said Claudia Amaral, Jordan head of office for the European Commission’s Humanitarian Aid and Civil Protection department (ECHO).

“Thanks to the extra money, many families can now keep their children in school – which is crucial for their development and gives them the chance of a better future in life.”

The recent additional grant from the EU’s humanitarian office (ECHO), will enable UNICEF to continue providing the much needed emergency cash assistance to the targeted vulnerable Syrian refugee children for the next five months.

“Thousands of vulnerable Syrian refugee households in Jordan are at the brink of survival. The child cash grant is one of the last ‘window of hope’ to save their children from becoming a lost generation,” said the UNICEF Representative Robert Jenkins.

“UNICEF is extremely grateful for the grant from the EU at this critical time, without which we would have had to discontinue the child cash grant programme,” he added.

UNICEF in Jordan has received a total of €24.1 million from the European Union’s humanitarian office since 2012, for child protection, water & sanitation and the current child cash grant programme.

[1] Over 80 per cent of the nearly 630,000 registered Syrian refugees in the country live outside refugee camps in host communities