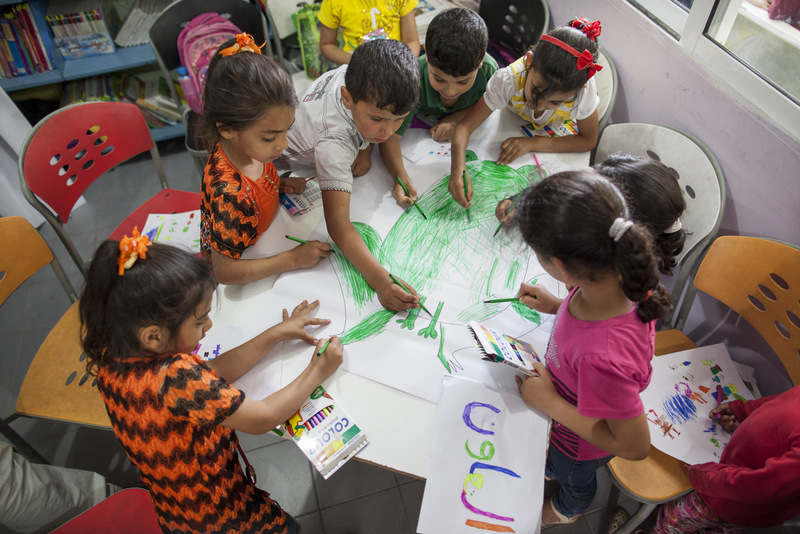 AMMAN, Jordan, 26 Oct 2015 – The Government of Netherlands has provided 14 million Euros to UNICEF to expand learning opportunities as well as other critical humanitarian support for vulnerable children, including Syrian refugee children, in Jordan.

UNICEF supports access to quality education opportunities for all children in Jordan, in close collaboration with the Ministry of Education. UNICEF launched the ‘Makani’ (My Space) initiative in March 2015 aimed at reaching 90,000 boys and girls in Jordan who are excluded from any form of education and are exposed to high risks of child labour, exploitation and early marriage. Managed in partnership with civil society organizations, ‘Makani’ centres provide informal learning, life skills training and psychosocial support services under one roof.

Speaking during an event at the Yarmouq Al-Baqa’a Club Makani centre, the Netherlands Ambassador to Jordan, H.E. Mr. Paul van den Ijssel said, “‘The Government of Netherlands is very happy to contribute to the Makani initiative. We support the call of UNICEF in doing everything possible to prevent the loss of an entire generation of children and young people because of the Humanitarian crisis.”

Ambassador Ijssel also announced a new grant of 10 million Euros from the Netherlands government to UNICEF. This increases the contribution from Netherlands to a total of 14 million Euros to support all vulnerable children affected by the Syrian refugee crisis in Jordan.

The Yarmouq Al-Baqa’a Club (YBC) Makani centre is one of the many centres being supported by the Government of Netherlands enabling more than 10,000 vulnerable children access informal learning, psychosocial support and life skills training.

The YBC centre in particular, is currently reaching 1,500 out of school children with informal learning opportunities, and 2,000 children with remedial education. In addition, 3,500 vulnerable children are accessing psychosocial support, and 1,200 adolescents and youth are participating in the life skills training.

“UNICEF is very grateful for the generous support from the Government of Netherlands which is helping thousands of vulnerable children in Jordan participate in learning as well access psycho social support services,” said the UNICEF Representative Robert Jenkins.  “Only through learning can children reach their full potential and play a positive and active role in society,” he added.