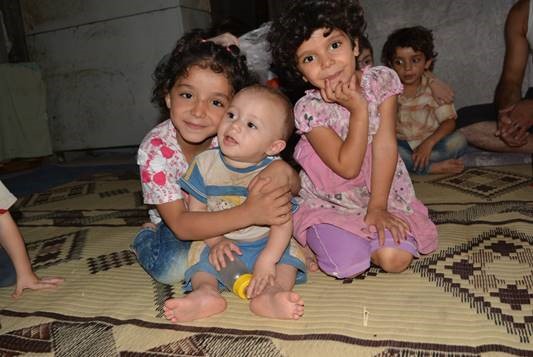 Naeema (left), and her sister (right) with their baby cousin. ©UNICEF Syria/2015/Basma Ourfali

“I’m happy this year because I get to go to school again,” said Naeema, 7, who just rejoined the first grade, after she had to drop out last year.

Naeema and her family fled the embattled eastern part of Aleppo when their house was destroyed.  They were displaced several times before finally settling in an unfinished building in the western part of Aleppo’s 1070 neighborhood. They share an apartment that has neither doors nor walls with three other families and their 13 children.

“Naeema is eager to learn,” her mother explained. “But I may not be able to send her to school this winter because she doesn’t have any warm clothes.”

It was for the same reason that Naeema had dropped out of school last year. She suffered from blue limbs during the snowstorm that clouded the Middle East.

“I can’t afford winter clothes,” her father explained. “I lost my job”.

Last year, like Naeema’s family, many families didn’t send their children to school because of the severe cold.

“We used to burn wood, plastic and even rubbish to keep the children warm,” the father said.

For Naeema, an innocent child’s hope is still alive. “I don’t want winter to come, I want to go to school.”