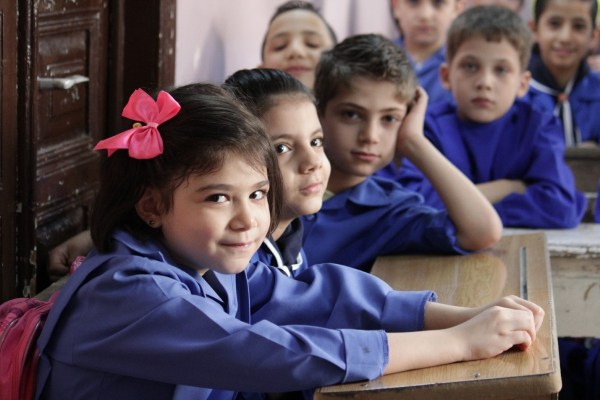 Damascus Syria, 20 September 2015- Four years into the Syria crisis, Sunday morning was not like any other morning in Damascus. “It is a day of hope,” said the taxi driver who drove me to work. “Look.” He pointed to children walking together to school.  Sunday the thirteenth of September marked the first day back to school in Syria. According to the Ministry of Education, four million students are ready for schooling.

Just driving through the roads of Damascus, you notice more colours in the streets.  The scene crafted with images of parents walking their children to schools, children holding hands of younger ones, busses full of colourful vibes. I notice a policeman making sure a bunch of kids cross the road safely. For the past week life is bussing in the morning in a city that has been marked by war and deprivation for years.

“65% of our students are internally displaced,” said Ms. Al Hamoud, head teacher of Ibn Malek School in Zahera, an area which is neighbouring the much affected western sides of Damascus Suburbs.

I arrived to this school simultaneously with an old school bus. “I drive children from Daf El Shourk, 20 minutes’ drive away from here,” said the driver. A father rushed to catch him, and explained his exact address. “Sorry,” the driver said. “I don’t go inside that area. The bus would be stuck in a long queue checkpoint. Perhaps you can walk your daughter to the main road and I pick her up from there?” The father instantly agreed while his 10 years old girl was clinching strongly to his hand. 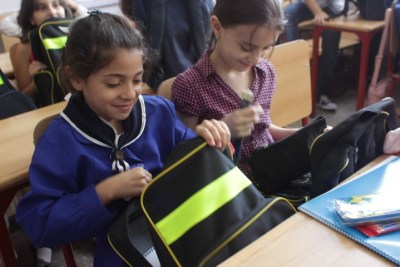 Fourth grade girl checking the content of her new school bag which was manufactured inside Syria. ©UNICEF/Syria/2015/Razan Rashidi

In areas hosting high numbers of displaced children, UNICEF has supported the rehabilitation of 600 schools. 300 prefabricated classrooms are being delivered to accommodate 300,000 additional children.

I remember the first days at school during my childhood. I used to be super excited and try to wear the nicest clothes.

During my school visit, I see how carefully children are prepared for the first day. “Celebrating back to school in style,” a colleague told me as I showed her the photos from Ibn Malek School.

I was raised in a middle income family where my brother and I were allowed to one new school bag every other year. I recall my excitement the year I had a new one.  On Sunday, and as part of my role with UNICEF, I took part myself in distributing school bags to students. UNICEF is distributing around one million schoolbags to children across Syria this year.

“It’s not easy to provide school supplies to four children,” a mother told me. “My husband lost his job as the factory he worked in was burnt. I support the family now, doing housekeeping. Everything, including pens and pencils, has become much more expensive. I almost cried when I saw my two daughters coming back from school carrying new bags.” 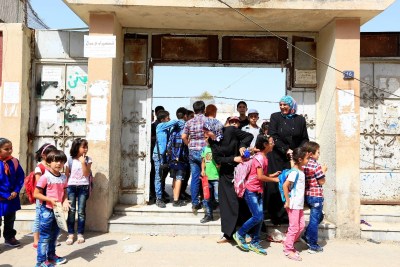 Mothers picking up their children from a school in Homs. ©UNICEF/2015/Syria/Omar Snadiki

“I love it! Especially that it has many pockets were I can hide my candies. I asked for the black one,” her daughter Rama told me. “All girls loved the red bag but I picked the black,” Rama said. “It will last longer, all my other friends wanted the black when I choose it” the girl explained.

Personally, what I like the most about this year’s UNICEF back to school intervention is the fact that most of the supplies are locally produced. I believe it is an opportunity for manpower such as Rama’s father to go back to work.