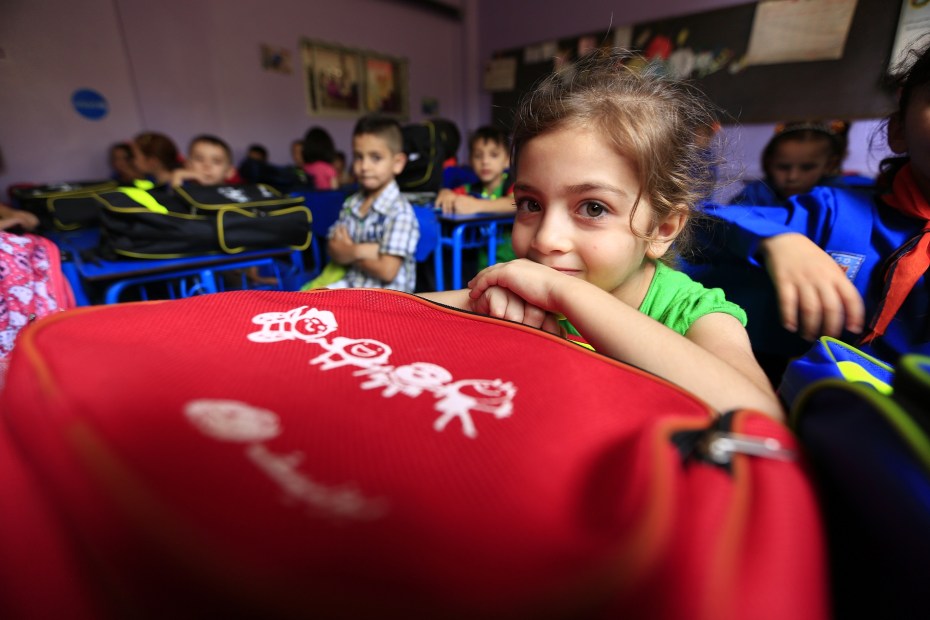 Fatima , 6, came with her family to Homs City after her home town Palmyra three months ago became very dangerous to live in. Fatima is in grade 1. For many children the first day in school can be tough. For Fatima, it is was even harder. Far away from home, Fatima misses ‘playing with her friends in her old neighborhood’. She yearns to go back to Palmyra and see her friends again. On her first day at school she was excited about one thing. To receive ‘a new bag’. ©UNICEF Syria/2015/Omar Sanadiki

Homs, 15 September 2015 – For many children the first day in school can be tough.  For six-year Fatima it was even harder.  Fatima along her family fled Palmyra City three months ago once the so-called Islamic State took it over.   The family currently lives in the city of Homs.

The look of worry and fear in Fatima’s eyes was obvious as she quietly sits in her classroom. Far away from home, Fatima misses her friends.   She yearns to go back to Palmyra and play in her old neighborhood again.

Ritaj is a nine grader in the same school as Fatima. Gazing around the noisy classroom, Ritaj looks shy and lonely.   She came from Raqqa last year fleeing the war.  It is her first day in school in Homs.   “I hope, one day I can go back home to Raqqa, where I like to be” she said breaking down in to tears.

Fatima and Ritaj are amongst the 3.5 million internally displaced children in Syria. Some of them have been displaced more than five times fleeing the conflict.  Yet, they are doing their absolute best to learn.

“Classrooms are overcrowded,” says the Principal of al-Ameryah Primary school in Homs. “This year we have to put 50 students in one classroom to absorb the displaced children.”

Schools in the city and other locations hosting displaced families are overstretched.  “We need additional text books and classrooms,” the principal added.

Some schools are being used as shelters for displaced people. Seven of the 27 classrooms in Al-Ameryah School are converted into shelters hosting nearly 30 families (135 people).  Recently, the school added makeshift tents to accommodate new families displaced from Palmyra and Rural Homs. Across Syria, 5,000 schools cannot be used because they have been destroyed, damaged, converted to shelter the displaced or for military use. 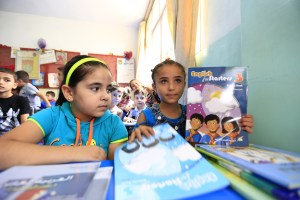 Responding to Children needs in education

UNICEF is working with a wide network of local partners on the ground to provide adequate space for learning, at least 600 school clubs were opened across the country to provide remedial education. In areas hosting high numbers of displaced children, 600 schools were rehabilitated and 300 prefabricated classrooms are being delivered to accommodate 300,000 additional children.

UNICEF is also distributing locally printed and procured text books and school supplies to 3 million children.  On the first day of school in Nazem Primary School, Fatima was very happy to receive her school supplies. “The most exciting thing about today is the bag,” says Fatima showing proudly her new school bag, drawing books, and pencils. “I like painting. I want to be an artist.”

The five years long war and upheaval has disrupted the education of millions of Syrians. Many children who would be third or fourth graders by now have rarely been inside a classroom. UNICE estimates that two million children are out of school in Syria, and 400,000 more are at risk of dropping out.  This year, UNICEF is rolling out a self-learning and an accelerated education programmes to provide more opportunities to learning for these children.

Much remains to be done so that the number of children out of school is significantly reduced.  School can provide the stability, structure and routine that children need to cope with the fear and stress they are experiencing amid the conflict.  In classrooms they can be protected from exploitation, violence and early marriage.

UNICEF is committed to safeguarding children’s right to education in Syria. To be able to continue responding to children’s needs in education, UNICEF requires 68 million US$ by end of the year of which 12 million US$ are needed immediately.