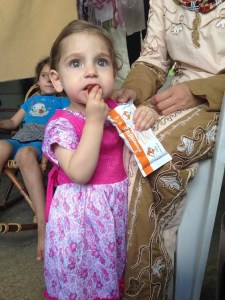 Pic 2©UNICEF Syria/2015/Saker- Farah grasping her ready-to-use food supplement, given to her at the UNICEF- supported medical center as part of her treatment.

“It’s very hard to watch your child suffer,” said Yasmeen, Farah’s mother. “Following a series of intestinal-related illnesses, Farah had lost her appetite. There were times when she had no energy to play with her two sisters or do anything. Now that she is back to normal I cannot keep up with her playing and running! She truly lives up to her name now [Joy].” The young mother added. 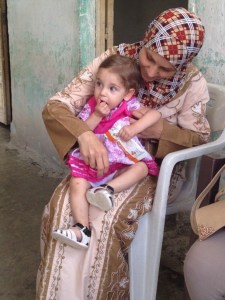 Yasmeen would ride on her husband’s motorcycle with her daughter from their    village to the medical centre once a week to monitor her progress and receive the weekly treatment. Severe Acute Malnutrition (SAM) is a life-threatening condition and a chronic form of malnutrition which requires an intensive treatment protocol involving nutritional supplements, medicine, micronutrients and close follow-up.

“It was not easy at all, fuel is expensive and the medical centre is a thirty- minute drive away.” Yasmeen explained. “But we were so committed to treat her, we did not miss one appointment.”

Dr. Amal, one of the doctors with the Disabled and their Friends Association, UNICEF’s local partner in Lattakia, supervised Farah’s treatment. She believes the results are a major breakthrough.

“Along with malnutrition, Farah was suffering from anaemia when her mother first brought her to the centre,” she said. “The fact that she regained her health during this short period is a great success. We will keep her under supervision for one month to ensure the sustainability of her treatment.”

Al- Haffe centre is one of the three medical facilities established by UNICEF and its partner in Lattakia and its suburbs, providing free medical care and awareness for children and their breastfeeding mothers. Yasmeen realizes the importance of the information she received at the centre.

“I learned the importance of Vitamins in maintaining her appetite and that I should take care of my own health so that I can continue to breastfeed her.” 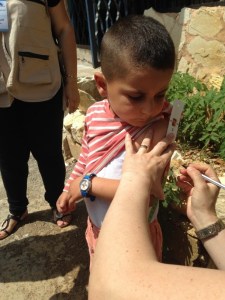 UNICEF further relies on mobile teams of more than 40 community volunteers in the   area. The community outreach volunteers are trained to identify and refer cases of malnutrition to the medical centres as well as supply the beneficiaries with necessary preventive care. In rural Lattakia alone, the volunteers target 100.000 children under 5 years of age and 85.000 pregnant and lactating women, with both treatment and medical advice.

“While Farah needed in-centre care, most malnourished children can be rehabilitated at home with ready-to-use therapeutic foods and routine medical care.” Said Sanabel Al- Qassier, Health and Nutrition Officer at UNICEF. “Therefore, the role of community based volunteers is extremely important in identifying and initiating care for malnourished children before they become seriously ill.” She explained.