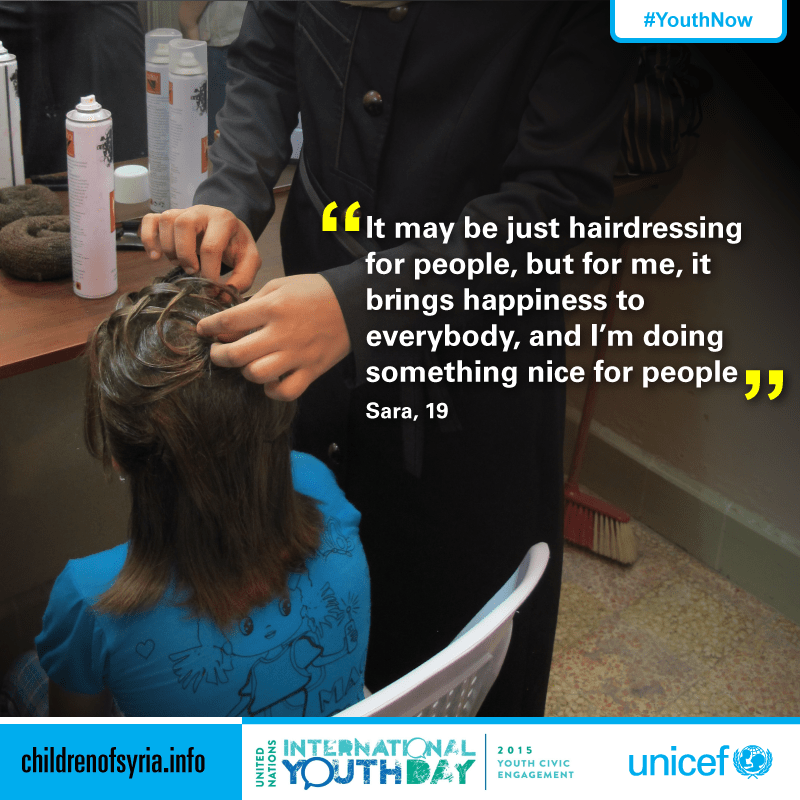 Homs, Syria – Nineteen-year old Sara was dreaming of improving her drawing skills and becoming an architect. But as she entered ninth grade the crisis in Syria broke out and her hopes turned to horror as her husband went missing and she was forced to drop out of school to care for her young child.

From Bab El Sba’a to Ghouta in Homs, Sara’s life – and dreams – were dominated by displacement as the safety of one neighborhood would soon give way to death and destruction. Having fled twice, she felt out on her luck.  Then she spotted a billboard about a UNICEF supported adolescent programme (ADAP) that has helped change the trajectory of her crumbling life.

She applied for a hairdressing course as a way to make money and feed her child and got accepted as a trainee in a salon.  She also took note of the other options from nursing to computer workshops that she is eyeing for a later time and for more opportunities in developing skills that can be turned into cash and a chance at school for her child.

Training for two hours a day over a period of six months as her parents looked after her son child, Sara’s 50 hour endeavor paid off.  She soon became an assistant hairdresser, working for her former trainer.

“It may be just hairdressing for people”, she says. “But for me, it brings happiness to everybody, and I’m doing something nice for the people”.

Then hope was rekindled once again in Sara’s life. She was contacted by the Vocational Institute “Al Birr”, partner of ADAP and affiliated with the UNDP, and got a full time job as a hairdresser in one of the salons in the neighborhood.

For Sara, it was much more than skills and income.  It also brought supportive friends and self-confidence – a network to rely on and a way to give back.

“Here, I feel I exist. I feel people listen to each other and accept others,” she said. “We always try to come up with new things. I have even come up with new hairdos to try, and they all liked them!”

Today, Sara is again filled with hope for a better future, for her family and for her community. What seemed impossible before as life around her crumbled seems closer now despite the continuation of the conflict.

The war has taken its toll, but Sara continues to push herself and extend a helping hand to others. With the support of ADAP, she works for a better life for herself, her parents, her child and her community.

“I know it’s a lot to dream of, but I really want to go back to school”, she says. “I want to study and work here at the same time.”

With ADAP, Sara is halfway there, and she knows she will never stop trying to push for her dream and stand ready to help reconstruct her country and broken lives.