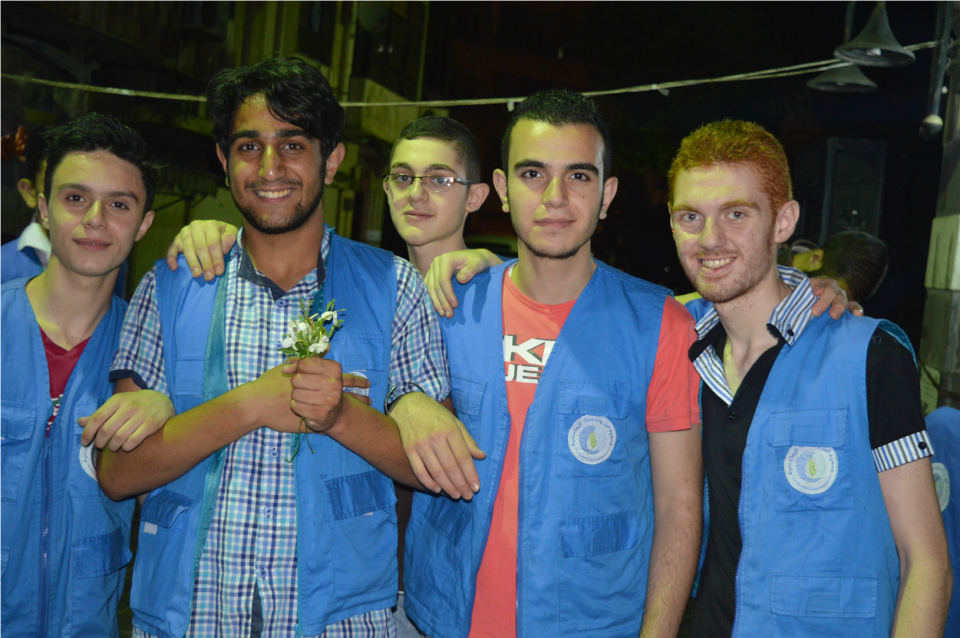 Homs, Syria – Qusai’s words to his country and the world are crystal clear.  “For me, it’s ultimately a message of peace.”

The determined sixteen-year-old has had a passion for theatre and playwriting since fourth grade. But then Syria’s crisis erupted, and with it came displacements in his city of Homs, first from the troubled Al Khalidyya neighborhood to Al Wa’ar and ultimately Al Hamra. As buildings and lives around him crumbled, Qusai’s love for country and strive for peace stood strong.

Thanks to a UNICEF supported centre named Ghirass, his message can now be heard and seen – loud and clear.

“I want my message to be heard and I will work day and night for it to reach everybody in Syria,” he said.

After volunteering for three and a half years in the Relief and Development Center in The Vocational Institute Al Birr, Qusai found his way to Ghirass, through a friend. The centre had just opened its doors in the Al Hamra area. With rents rising amidst the conflict, Qusai had to leave his family in the embattled Hayy Al Wa’ar.

“We could not afford to get a new house in Al Hamra for the family. So I had to move and live with my aunts,” he said.

There was so much Qusai wanted to say to the world, so much he wanted to do – and express it through art. At Al Hamra, he found exactly what he needed to bring his message to life and on stage – nurturing of his talents and finding support and resources.

“I just went to pitch my ideas. I had always wanted to produce my own plays, and with Ghirass, I knew it was possible,” he said.

Qusai was right. His first play came to light in October 2013, and the second quickly followed in April 2014 mostly featuring children and adolescents. Inspired by years of conflicts in the country, these two plays were a huge step for Qusai, not only in nurturing his talent but also in spreading a constructive message to communities of mutual understanding and support.

“I learned so much more, beyond scriptwriting and theatre production. From storytelling to speech to workshops, I discovered in Ghirass so many different ways for each and every one of us to make a difference,” he said.

Qusai credits Ghirass for nurturing his talent and passions.  From collaborative teamwork to Life Skill programs, he explored new areas of interest, new ways of thinking and innovative ways of making things better for him and for those around him. Whether through singing or playwright – even if he notes that his voice might need a bit of improvement – his message was heard.

“I’ve always loved singing,” he said. “I even sing my school homework when I need to memorize my lessons.”

It’s a difference he makes every single day, with the constant help and guidance of his team, friends and extended family of Ghirass. Qusai says they all meet to achieve one goal and one goal only: a better tomorrow, each in his or her very own way. As he proudly shows his ongoing work on prospective plays and his learnings from the Life Skill sessions to the Youth Volunteering programs, you can’t help but notice a strong sense of self and reality in his work and voice.

“We’re not in denial,” he said. “We know how things are, and we don’t know how much worse it can get. And this is exactly why we’re here.”

It’s a mission Qusai has sworn to fulfill after he finishes his studies, ultimately seeking a spot in The Higher Institute of Theatrical Art in Damascus. It’s a place he’s always dreamt of, and one that he feels is now within reach despite the reality of the conflict.

“I just want to be an Ambassador of peace in my country,” he said.

With two plays at the age of 16, Qusai dreams of the levels he – and his country – will reach. With the network at Ghirass he knows it’s a call for peace shared by so many.