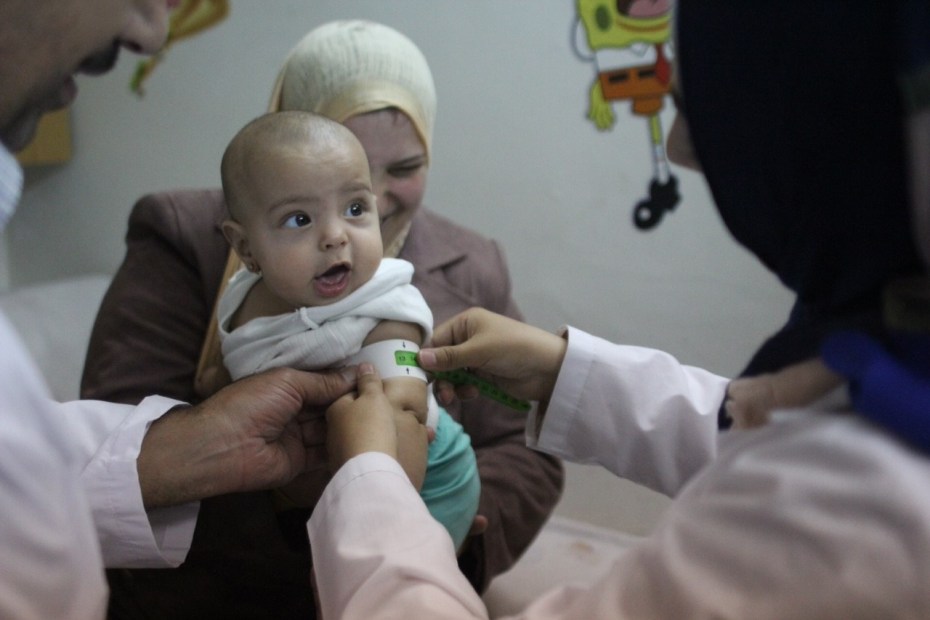 Damascus- 8 Auguest 2015 “I am proud of my baby girl and myself. We just got her nutritional screening and she is healthy” Rudaina* told us with excitement.

“It’s because I have been breastfeeding her for the past seven months” the mother added.

Rudania, a mother of three fled her home  in eastern Aleppo two years ago. A few months later she got pregnant with her third girl. She now lives in a rented apartment in one of Damascus’s impoverished neighborhoods. Today she visited a UNICEF supported nutrition centre where health workers are trained to screen the nutritional status of children.  The mid arm circumference measurement tape on  Rudaina’s seven- month old baby girl, Tala points on the green cutoff, indicating the child is well nourished.   This brought a nice smile on Rudaina’s face. The doctor encouraged her to continue breastfeeding and explained what other food she can add to the baby’s diet.

With the support of several donors including the United Arab Emirates, UNICEF supports 60 nutrition centres across Syria.  Mothers and caregivers who come to these centres receive information sessions on breastfeeding especially in the time of stress and crisis. “It’s not easy to live normally when you are displaced. Everything has changed for us even the food I get as a mother but I still believe God’s will is protecting us” the mother said.

Here, at the Syrian Family Planning Association a local NGO which runs the nutrition centre, over 3,000 children were screened for malnutrition between February to July, 160 of those children were identified as malnourished. “All those cases are being followed up and treated according to Community Management of Acute Malnutrition- rotocol” Siham Mousa the project coordinator from SFPA confirms.

Most of the malnutrition cases are amongst children who recently arrived to Damascus from locations across Syria where conflict has been the heaviest. The United Nations estimates that more than 400,000 Syrians live in besieged locations, deprived from humanitarian assistance and access to basic services. “For this centre the cases are mainly from Rural Damascus areas” Mousa said

In the past few months two UNICEF  convoys to Yalda, Babella and Beith Sahem in Rural Damascus delivered nutrition supplements to 9,600 children under five. In addition to reaching more than 90,000 people in hard- to- reach locations with nutrition services like  screening, treatment of cases, delivery of nutrition supplies and counseling

“Tala was born after we were displaced. I hope by the time she is aware of her surroundings we are back in our home and city” says Rudaiana. “Her father and I hope she becomes a doctor one day”.