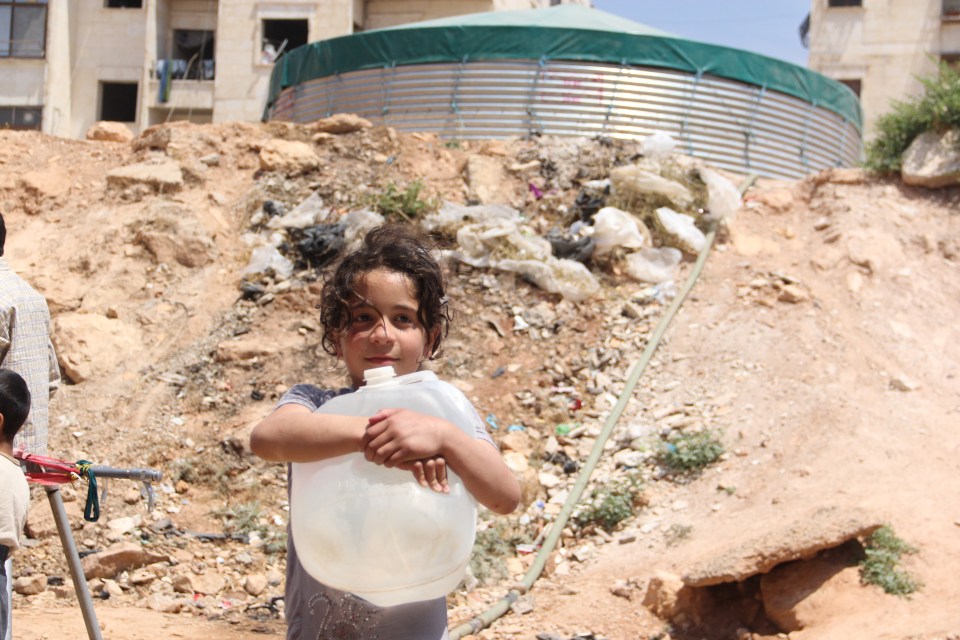 Since the beginning of the year, Syria has reported 105,886 cases of acute diarrhoea. There has also been a sharp increase of Hepatitis A cases with a record 1,700 cases reported in one week alone last February[1].

The intensification of conflict across the country has caused new waves of population displacement placing further strain on an already fragile water and sanitation network.

“The situation is alarming particularly for children who are especially susceptible to water borne diseases,” says Hanaa Singer UNICEF’s Representative in Syria. “With the crisis now in its fifth year, water has become even more scarce and unsafe, and poor hygiene conditions especially among the displaced communities are putting more children at severe risk.”

One area where the risk of disease outbreak is particularly high is Deir-Ez-Zour in the east. Reports indicate that raw sewage is causing serious contamination to the Euphrates river on which the local population depends for its water supply. In the area 1,144 of typhoid cases have been reported.

High fuel prices are another factor impacting civilians’ access to water. In Idleb in the west of Syria, fuel prices have tripled to 500 Syrian pounds (2.6 US$) per litre. In addition, water pumping stations are operating only two hours a day reducing the availability of water to only 20 litres a day per person.

In another worrying development, the closure of the border crossing with Jordan is disrupting the delivery of critical water treatment supplies into Syria. Before its closure in early April, UNICEF used the crossing to deliver on average half a million litres of water treatment material every month. As a result, stocks inside Syria are running low.

“Since the beginning of the crisis, we’ve been working with a range of partners to support the vital water infrastructure on which some 15 million people in Syria depend.” says Singer. “This includes drilling and equipping wells as alternative sources of water when the main supply fails as well as supporting the local production and procurement of water treatment supplies”.

UNICEF is urgently appealing for US$ 5 million by end of August for its water, sanitation and hygiene response inside Syria.

About UNICEF: UNICEF works in more than 190 countries and territories to help children survive and thrive, from early childhood through adolescence. The world’s largest provider of vaccines for developing countries, UNICEF supports child health and nutrition, good water and sanitation, quality basic education for all boys and girls, and the protection of children from violence, exploitation, and AIDS. UNICEF is funded entirely by the voluntary contributions of individuals, businesses, foundations and governments. For more information about UNICEF and its work visit: www.unicef.org/mena.