· UNICEF Syria participated this month in i 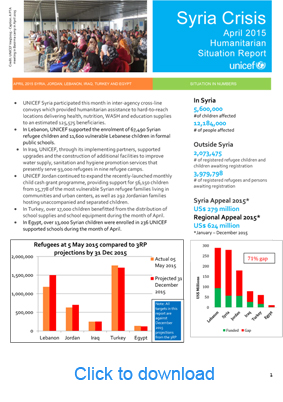 · In Iraq, UNICEF, through its implementing partners, supported upgrades and the construction of additional facilities to improve water supply, sanitation and hygiene promotion services that presently serve 93,000 refugees in nine refugee camps.

· UNICEF Jordan continued to expand the recently-launched monthly child cash grant programme, providing support for 56,150 children from 15,778 of the most vulnerable Syrian refugee families living in communities and urban centers, as well as 292 Jordanian families hosting unaccompanied and separated children.

· In Turkey, over 17,000 children benefitted from the distribution of school supplies and school equipment during the month of April.

· In Egypt, over 13,000 Syrian children were enrolled in 236 UNICEF supported schools during the month of April.